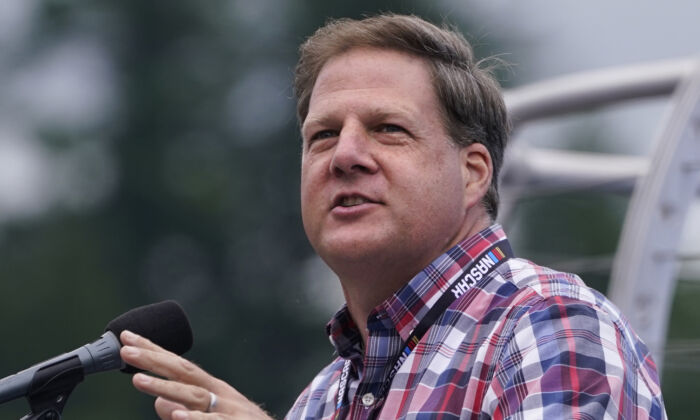 At least five of New Hampshire’s 10 Republican Party county committees have approved resolutions calling for an independent investigation into GOP Gov. Chris Sununu’s possible involvement in the arrests of nine individuals at a public meeting in October.

The resolutions seek a third-party probe of “unresolved troubling questions related to the actions of New Hampshire State Police at the Oct. 13 meeting.”

To include, the resolutions specify, “the involvement—at any point prior to, during, or after, the meeting—by the governor.”

Nine people were arrested at a meeting of the state Executive Council, which was deciding whether to accept $27 million in federal funds to promote the COVID-19 vaccine in New Hampshire. Some of those who were arrested were protesters who showed up at a previous council meeting, and walked around the meeting, loudly chanting “shut it down.”

A video shows Frank Staples, who was arrested at the Oct. 13 meeting, stating “we know where you live” twice, while pointing at state officials.

State Rep. Norman Silber, chairman of the Belknap County Republican Committee—which spearheaded the call for the investigation—told The Epoch Times that he had seen no evidence that would have necessitated the arrests.

One protester, he said, was arrested for saying “Amen” to someone else’s comment.

Silber said he was especially concerned by the high number of state police at the meeting, estimated to be as many as 80.

“The overwhelming presence of state police in that meeting was, I think, to be a chilling of First Amendment rights.”

Silber said he was also disturbed by Sununu admonishing the group when they raised their voices to recite the Pledge of Allegiance.

“For the governor to chastise them and warn them, as if saying the pledge to the flag loudly was a disruption, I found that to be problematic,” he said.

Not all members of the Republican committees that approved the resolutions, however,  supported them. For example, while the Merrimack County committee passed the resolution by a 25–3 vote, its chairman, Scott Maltzie, was among the votes against the proposal.

Bruce Perlo, a 20-year veteran of state Republican Party politics, told The Epoch Times that the party’s committees exist to keep Republicans in control, not to investigate their own leaders.

“The problem is there are some who think the party isn’t conservative enough and when they don’t get their way, they get upset,” said Perlo, who also is chairman of the Grafton County Republican Committee, which didn’t adopt a resolution.

Perlo said that’s how New Hampshire ended up with Maggie Hassan, a Democrat, as a U.S. senator. The GOP opposed Republican candidate Kelly Ayotte’s reelection bid, because they didn’t think she was conservative enough, he said.

Silber said suspicion that Sununu had ordered the arrests came from several videos posted online that showed the governor texting and making what appeared to be head gestures to state police, just before they walked up to individuals—most of whom were sitting in the audience—and arrested them.

Silber submitted a Right to Know Request to the state police headquarters via an email dated Oct. 15, requesting records of Sununu’s texts, emails, and “any other form of communication” directing state police to make arrests at the Oct. 13 meeting.

David Hilts, senior staff counsel for the state’s Department of Safety, replied to Silber’s request, via an Oct. 20 email, stating, “We have no records responsive to your request.”

State Attorney General John Formella said in a statement issued the day after the Sept. 29 executive council meeting that he would be reviewing the conduct of the protesters to determine if any of them committed crimes. Sununu then issued a statement condemning the protesters for being “unruly and aggressive,” and held a press conference to assert that the protesters “had crossed the line.”

Silber expects the matter to be referred to the state’s House leaders.