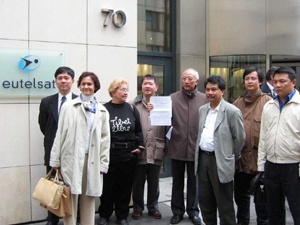 Representatives of some of the many non-governmental organizations (NGOs) in Paris who jointly sent letters to Eutelsat pose in front of Eutelsat&#039s building. (Epoch Times)
China

PARIS – In the afternoon of April 6, 2005, a week before Eutelsat stopped New Tang Dynasty Television (NTDTV)’s transmission to Asia and China on April 15, several non-governmental organizations (NGOs) and individuals accompanied by NTDTV’s representatives went to Eutelsat’s headquarter in Paris, sending a joint petition to Eutelsat CEO Mr. Giuliano Berretta. They hoped Eutelsat would not bow to the CCP’s political and economic pressure and call for upholding the values of democracy and freedom of speech set by the European constitution.

Those who went to send the letter were Wu Baozhang, former director of Chinese language department of Radio France Internationale (RFI); Feng Congde, chairman of the Tiananmen massacre commemoration association; Zhang Jian, priest of the Evangelical Christian Church and Commander in Chief of the Tiananmen Square student squad during the 1989 Tiananmen massacre; Pich Piseth, Kampuchean, Vice President of Asian Youth Democratic Coalition who made the special trip from Rouen; Laurent Lyfoung, Vice President of Friends of Hmong People, an organization of Hmong people who were slaughtered by the CCP in Laos; and Marcelle Roux, president of the French Tibetan Association. Others who also jointly signed the petition are Wu Jiang, president of the Chinese Democratic Party, French branch; Cai Chongguo, member of the Chinese Solidarity; and Pham Anh Dung, Chairman of the Vietnamese Committee of France Libertes.

In the letter, they wrote, “We call on Eutelsat to support the mission of NTDTV. This TV station provides independent, fair and objective information to it’ viewers, it advocates in the pluralism and free flow of Chinese media’s information and safeguards democratic values. We come here not only for NTDTV, but also for several tens of millions of Chinese people who have satellite dishes and a hundred million of Chinese people who do not have satellite dishes.”

In front of Eutelsat’s headquarter, through NTDTV’s camera lens, the representatives expressed their support to NTDTV and condemnation of Eutelsat stopping NTDTV’s transmission to Asia and China. They urged Eutelsat not to abandon the fundamental values of the European constitution because of a temporary shortsighted view.

NTDTV’s loyal viewer Mr. Wu Baozhang thinks Eutelsat’s decision violates the European constitution. He cited the undisputable charter of fundamental rights of the European Union in the European constitution, which is article II-71, “1. Everyone has the right to freedom of expression. This right shall include freedom to hold opinions and to receive and impart information and ideas without interference by public authority and regardless of frontiers. 2. The freedom and pluralism of the media shall be respected.” He said, “Eutelsat’s decision is a shortsighted decision.”

He also said, “I once again cordially call on leaders of Eutelsat to cancel this decision and continue the contract with NTDTV, otherwise, history will remember that while the Chinese people continued to suffer the brutal dictatorship imposed by Beijing authorities in the name of Communism, Eutelsat once stood by its side and helped the Chinese authorities to intensify its means – it let the Chinese people fall into one of the biggest agonies of mankind – ignorance.”

Mr. Feng Congde said that he admires the courage and professional dedication of NTDTV’s personnel. He thinks Eutelsat made the decision totally because of CCP’s pressure, to please the CCP and for China’s so-called big market.

Zhang Jian who is now the priest of the Evangelical Christian Church told the reporter, “NTDTV is an independent TV station. There are many voices that represent truth, and it also has many stories that tell the truth of history. The transmission of a TV station that can spread truth to the Chinese people and express a voice of truth is shut off. I feel very sorry. I am very disappointed that a free country in Europe actually bowed to the threat of the CCP’s evil force.” Tomorrow, he will go to Geneva to attend the 61st session of the U.N. Commission on Human Rights and will give a talk on the CCP’s serious persecution of religious belief. He said, “NTDTV often reports the truth of the persecution of religious dissidents by the CCP. This what the CCP worries the most about and fears the most. We will protest against Eutelsat’s wrong-doing in the media conference.”

Since this Tuesday, some of NTDTV’s French viewers along with NTDTV’s French branch started to distribute flyers and collect signatures near Eutelsat’s headquarters in Paris. They tell the people who pass by about Eutelsat refusing to continue NTDTV’s broadcast to Asia and call for the support of media freedom. Some leaders of the organizations expressed that they would notify more people to pay attention to this matter and collect signatures from their friends and possibly hold large-scale assembly.