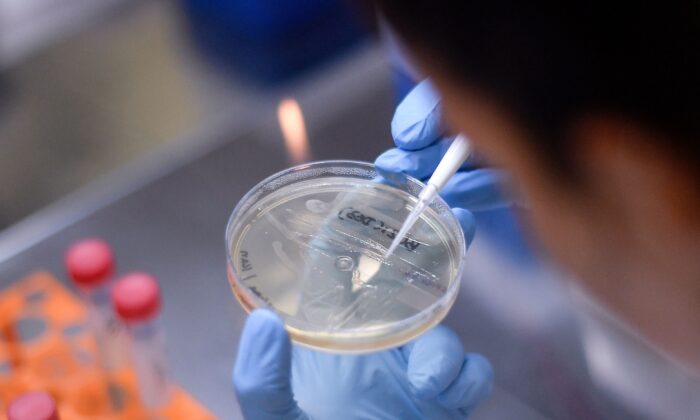 A researcher works on the development of a vaccine against COVID-19, in Belo Horizonte, Brazil, on March 26, 2020. (Douglas Magno/AFP/Getty Images)
Coronavirus In-Depth

Researchers at the Coalition for Epidemic Preparedness Innovation (CEPI), an international nongovernmental organization, are calling for a new model of vaccine development for pandemics.

The team argues in a paper published in the New England Journal of Medicine that overlapping otherwise linear stages of vaccine development and investing early in manufacturing capacity can bring pandemic vaccines to market faster and blunt the impact of a major outbreak such as COVID-19.

“Vaccine development is a lengthy, expensive process. Attrition is high, and it typically takes multiple candidates and many years to produce a licensed vaccine,” the CEPI team explained in the scientific article, published on March 30.

The team says overlapping phases of vaccine development would shorten the time-to-market for a viable candidate, but at a cost.

“Developing a vaccine quickly requires a new pandemic paradigm with a fast start and many steps executed in parallel before confirming a successful outcome of another step, hence resulting in elevated financial risk,” the CEPI team said.

Because of the cost and high failure rates, vaccine developers typically follow a linear sequence, pausing many times to analyze data and check their manufacturing processes. While that saves money by preventing misinvestment in non-viable vaccines, it drags out the development process.

The COVID-19 pandemic has sparked social distancing measures and business shutdowns across the world, with major economic impacts. While pouring funds into vaccine manufacturing lines at an earlier stage than normally might seem financially imprudent, getting a vaccine out faster and bringing economic activity back sooner might end up being less of a hit to the bottom line.

“The pandemic paradigm requires multiple activities to be conducted at financial risk to developers and manufacturers, and without knowing whether the vaccine candidate will be safe and effective, including very early manufacturing scale-up to commercial scale before establishment of clinical proof of concept,” the team explained.

The new model would bring forward in time steps like the “go or no-go” decision to invest in a candidate vaccine and the development and scale-up of manufacturing potential, so that when a candidate vaccine is proven safe and effective, doses can be produced quickly on a mass scale.

Another example of a difference in process between traditional vaccine development and the pandemic paradigm is that Phase 1 clinical trials may be able to proceed in parallel with testing in animals.

CEPI stated it hasn’t established financial mechanisms and instruments to support the development of pandemic vaccines, in line with its proposed new model. It has issued a funding call to see COVID-19 vaccines through the development and scale-up manufacturing processes.

“Discussions with global stakeholders about organizing and financing large-scale vaccine manufacturing, procurement, and delivery are under way,” the team stated.

Johnson’s announcement followed a virtual conference with G-20 leaders that acknowledged the coalition’s recent global call for $2 billion to progress COVID-19 vaccines through to manufacture.

The British prime minister also called on other governments to work together to create a vaccine as quickly as possible.

“This decisive action and financial support from the UK Government comes at a pivotal moment for a world that is in crisis. The UK has a long history of global health leadership and, today, the UK is once again stepping up as a global leader in its support CEPI and our crucial work to accelerate the development of a vaccine against COVID-19,” said Dr. Richard Hatchett, CEO of CEPI.

“We face one of the greatest challenges humankind has faced in the last century: a disease that has spread globally, that is most dangerous to the most vulnerable members of our society, and that threatens our economic order and very way of life,” Hatchett said.

The CCP (Chinese Communist Party) virus, commonly known as novel coronavirus, causes the disease COVID-19; the virus has infected people in most countries around the world.

For most people, COVID-19 causes mild or moderate symptoms, such as fever and cough, which clear up in two to three weeks. For some, especially older adults and people with preexisting health problems, it can cause more severe illness, including pneumonia or death.

The virus is thought to spread mainly from person-to-person, typically between people who are in close contact with one another and via respiratory droplets produced when an infected person coughs or sneezes.