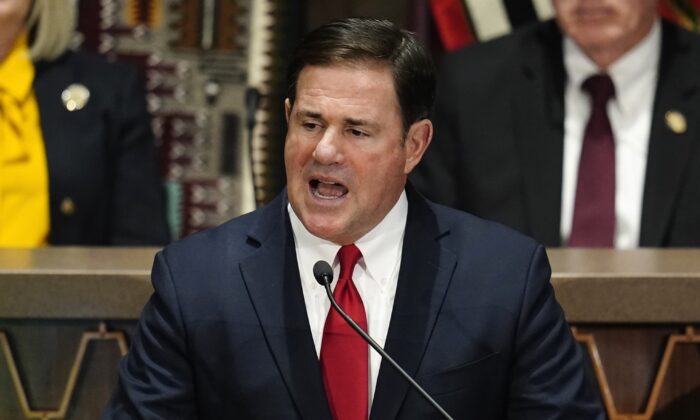 Ahead of a meeting with the National Governors Association (NGA) on Monday, President Joe Biden spoke of America having a chance to reassert world leadership on a range of issues including “everything from the environment to dealing with the issues of immigration.”

But in an interview with Fox and Friends following the meeting, Ducey, who is also Republican Governors Association Co-Chair, blasted Biden for “ignoring” questions from Republican governors regarding the immigration crisis.

“They keep talking about the Northern Triangle, Honduras, Guatemala,” Ducey said. “They’re not addressing the real public safety issues that are happening at the border, what the cartels are doing, what’s happening around national security and the fentanyl that’s pouring over.”

Biden tapped Vice President Kamala Harris to run point on immigration policy at the U.S. southern border last year. In July, the administration released its “Strategy to Address the Root Causes of Migration in Central America.”

“If Kamala Harris is looking for root causes, all she has to do is look inside the Oval Office,” said Ducey Monday.

In August, Ducey moved to extend the Arizona National Guard’s border mission for another year to support law enforcement efforts there.

Biden has continued Title 42 of the Public Health Service Act put into place by his predecessor, President Donald Trump, at the onset of the COVID-19 outbreak in 2020. Title 42 grants powers to federal health officials to limit transmission of an infectious disease. The Department of Homeland Security (DHS) has been invoking the public health law to limit border crossings.

A court order in December also ordered the Biden administration to reimplement the Trump-era “Remain in Mexico” program, which required those seeking entry into the United States to wait in Mexico until their immigration court hearings. Biden had previously called the policy “inhumane.”

In recent letter to Sen. Ron Johnson (R-Wis.), the DHS revealed that 104,171 illegal immigrants were released into the United States between the end of March and the end of August of last year and issued Notices to Report to an Immigrations and Customs Enforcement (ICE) facility. 47,705 of them failed to report within a required 60-day timeframe, according to the letter.

“Migrants who cannot be expelled under Title 42 are placed into immigration proceedings,” said White House press secretary Jen Psaki last week. “And one of those avenues could be placement in an alternative to detention program in the interior of the United States. Sometimes that means moving migrants to other parts of the United States to move to different detention facilities, where they wait for next steps in the immigration process, such as a court hearing, and are required to check in with a local ICE office.”

Video and audio of tense meetings between Border Patrol agents and leadership have leaked in recent days—from both the Yuma Sector of Arizona, and in Laredo, Texas. The clips show agents saying that Biden administration immigration policies are limiting Border Patrol’s ability to secure the border and keep people safe.

“[Biden] could take action right now that would secure that border,” Ducey said Monday. “We sent him a 10-point plan from the Republican Governors Association that he could address immediately to secure our border. So what we want is action, attention, and purpose from this administration, and it can’t wait. It needs to happen right now.”