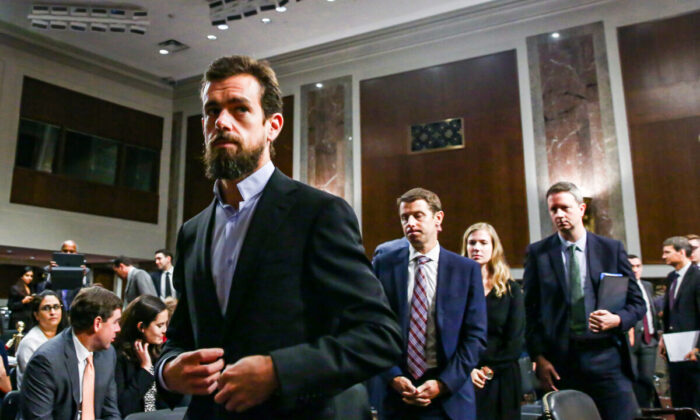 Jack Dorsey, CEO of Twitter Inc., testifies at a hearing to examine foreign influence operations' use of social media platforms before the Intelligence Committee at the Capitol in Washington on Sept. 5, 2018. (Samira Bouaou/The Epoch Times)
Cryptocurrency

A non-fungible token (NFT) of the first-ever tweet drew only $280 in an online auction, vastly disappointing the expectations of the investor who hoped to turn around the costly NFT for an astronomical profit.

The NFT of Twitter’s former CEO and co-founder Jack Dorsey’s tweet was first sold last year to Sina Estavi, an Iranian-born crypto entrepreneur based in Malaysia. At the time, the mysterious Estavi purchased the NFT for $2.9 million, the proceeds from which Dorsey promised to donate to CCP (Chinese Communist Party) virus relief in Africa. In his own account, Estavi hoped to sell the NFT for $49 million, making a profit many times the value of his initial purchase.

Earlier this week, Estavi rejected an offer to purchase the NFT for about $280 worth of Ether, the highest bid made during the token’s auction. While offers have subsequently arisen for as much as 3.6 Ether (a little less than $11,000), the token is still far from recouping the cost of the initial investment, as even this latter figure constitutes a 99 percent decline in value in the span of a year.

“The deadline I set was over, but if I get a good offer, I might accept it, I might never sell it,” said Estavi in a statement to CoinDesk.

“just setting up my twttr [sic],” reads Dorsey’s original tweet, dated March 21, 2006. While the tweet is hardly on par with the short imagist poems of Ezra Pound, its apparent deficit of literary value is compensated for by its symbolic significance as the beginning of the new social medium—at least, so the Persian investor had hoped.

“This is not just a tweet! I think years later people will realize the true value of this tweet, like the Mona Lisa painting,” said Estavi at the time of his purchase.

Estavi did not respond to a request for comment.

Apparently hoping to salvage his investment, Estavi has taken to Twitter to entreat one potential buyer with a big name and deep pockets: Tesla CEO Elon Musk, whose recent involvement in and attempted acquisition of Twitter Inc. has become the talk of the town in tech.

“It’s not good if the owner of the whole Twitter does not own the first tweet :),” said Estavi in a quote tweet of Musk’s initial offer. As of writing, Musk has not responded to Estavi’s appeal.