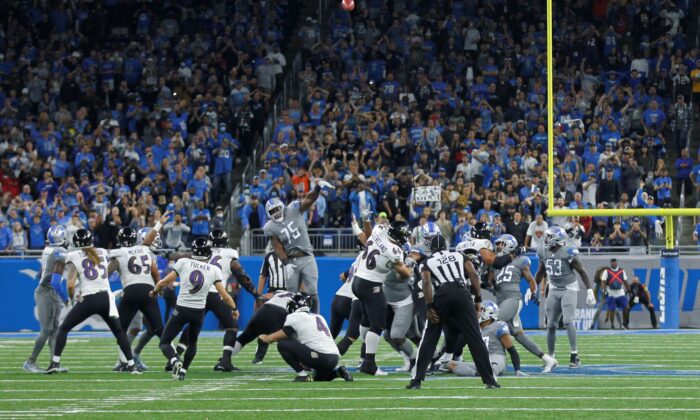 Baltimore Ravens kicker Justin Tucker (9) kicks a 66-yard field goal in the second half of an NFL football game against the Detroit Lions in Detroit, Mich., on Sept. 26, 2021. (Tony Ding/AP Photo)
Sports

Matt Prater came up short and paid the price, not once but twice.

His attempt to break his own record for a longest field goal in NFL history—a 64-yarder in Denver’s thin air eight years ago—backfired Sunday when a former teammate returned his missed 68-yard attempt in Jacksonville’s heavy air a record-tying 109 yards for a touchdown on the last play of the first half.

Prater’s third-quarter field goal from half that distance ignited the Cardinals’ comeback from a 13–7 halftime deficit that sent the Jaguars to their 18th consecutive loss.

But his record fell anyway.

A thousand miles north, in Detroit’s climate-controlled Ford Field, where Prater plied his craft for the last seven seasons, Baltimore’s Justin Tucker, the most accurate kicker in league history, lined up at his own 40-yard line with three seconds left.

His holder was at the Ravens 44, and the snapper at the Lions 48 after some heroics by Lamar Jackson and a little help from the officiating crew.

Tucker’s attempt from 66 yards out bounced over the crossbar as time expired to send the Ravens to an electric 19–17 win over the Lions.

“That one was more like a kickoff,” said Tucker, who hop-stepped on his way to blasting the ball from his own 44. “It’s like you’re a competitor in a long-drive contest. You just let it rip and hope it stays straight.”

Prater’s league record that had stood for 2,850 days came crumbling down. Although he no longer holds the record for longest field goal, a 64-yarder against the Titans on Dec. 8, 2013, Prater does own the longest field goal for three franchises: Cardinals (62 yards), Lions (63), and Broncos (64).

Kickers have never been this clutch this early, but Kliff Kingsbury having Prater attempt a 68-yarder in Florida was a stretch.

Jamal Agnew returned the miss 109 yards for a touchdown, breaking two tackles and eluding another before sweeping past Prater over the final 10 yards.

“That’s about as big a moment of adversity as you can face in an NFL football game, to have something like that happen right before the half,” Kingsbury said after the Cardinals improved to 3–0 for the first time since 2015. “Guys didn’t blink. Even when we went down two scores, guys didn’t blink. I was really proud of that effort.”

Three other games were decided on last-second field goals in addition to Tucker’s record-breaker in Week 3.

Daniel Carlson, whose missed extra point allowed the Dolphins to send the game into overtime, won it with a 22-yarder as time expired to keep the Raiders unbeaten and tied with Denver atop the topsy-turvy AFC West.

Younghoe Koo’s 40-yarder as the clock hit zero sent the Falcons past the winless Giants at MetLife Stadium, a short drive from where he played high school ball in Ridgewood, New Jersey.

The day the kickers ruled the NFL came to a close Sunday night when Mason Crosby’s 51-yarder as time expired gave Green Bay a 30-28 win over the 49ers at breezy Levi’s Stadium in Santa Clara, California.

Altogether, there have been 10 go-ahead field goals in the final 10 seconds of regulation or overtime this season. That’s the most through Week 3 since the 1970 merger.

Even in this day and age of the prolific passing games, a good share of games every week comes down to the greatest toes on turf.

And a little luck.

Here’s the rub for the Lions—and for Prater—the back judge missed a delay of game penalty on the snap before Tucker’s record-breaking field goal that would have backed up the Ravens 5 yards and taken Tucker out of his range.

After throwing a 36-yard pass to Sammy Watkins on fourth-and-19 from his own 16, Jackson spiked the ball to stop the clock with seven seconds left. TV footage suggested the play clock expired by nearly 2 seconds before the snap on the next play, an incompletion.

“We’ll get an apology and it doesn’t mean anything,” said Lions first-year coach Dan Campbell, who fell to 0-3.

Tucker—who made a 61-yard kick to beat the Lions in Baltimore’s previous visit to Detroit eight years ago—then came out and made the record-breaking field goal.

“I love Detroit,” Tucker said. “I’m thinking about getting a place here.”