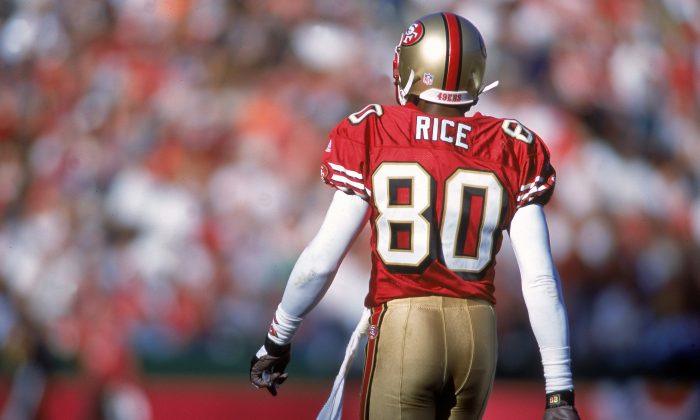 Jerry Rice is the greatest receiver of all-time and he has the records to prove it. (Jed Jacobsohn /Allsport/Getty Images)
NFL

Arizona wide receiver Larry Fitzgerald became the youngest member of the NFL’s 1,000-catch club when the 32-year-old hauled in the historic pass on Dec. 6 in the Cardinals’ win over the Rams.

Although Rice didn’t catch his 1,000th pass until he was 34, the legendary receiver played until he was 42 years old—an unheard-of age in the NFL for non-quarterbacks.

Fitzgerald doesn’t think breaking Rice’s record is attainable, according to what he told MMQB.com.

Yet this mark doesn’t even crack the top five on the list for the NFL’s most unbreakable records. Here they are:

On the surface, this one doesn’t seem so far-fetched—three players are tied for second place with 13. But no one has even recorded more than 10 interceptions in a season since Everson Walls picked off 11 in 1981 for the Dallas Cowboys. Plus, with the pass interference rule changes made in 2004, passing has taken off as defensive backs have fewer weapons to play with on defense.

Shula coached his first season in 1963 with the Baltimore Colts. He was just 33 years old. He remained there until 1970 when he switched jobs and became the Dolphins’ head coach. He would stay in that capacity until he retired following the 1995 season. That’s 33 seasons, and only twice did he have a losing season (1976 and 1988). Nineteen times his teams advanced to the playoffs, and they won two Super Bowls (1972 and 1973). Even though he coached in the era of 14-game seasons, no one is close to his record. New England’s Bill Belichick is the closest at 222, but the 63-year-old would have to average 10 wins a year for the next decade to reach him. Doesn’t seem likely.

Rice was one of a kind. While his receptions record is close to out-of-reach, his TD record is pretty much untouchable. Only nine players have even reached 100, and Randy Moss (156) and Terrell Owens (153) are the only others to even surpass the 150 mark. The only active player with more than 100 is 35-year-old Antonio Gates with 103. Fitzgerald (96) isn’t even halfway there yet and he’s the closest active wideout. No one’s touching this mark.

The 2007 New England Patriots famously went 18–0 before losing in the Super Bowl, and that’s the closest any team has been in the last 43 years. Why? Not only does the NFL have incredible parity, but most coaches would rather rest their starters for the playoffs in the final weeks than go for the record. Even if this year’s 13–0 Carolina makes it to the postseason with an unbeaten mark, the week-to-week pressure becomes the biggest obstacle to overcome.

Rice was the best receiver ever, and this was his most ridiculous record. The 10-time All-Pro had 14 1,000-yard seasons among his 20 years in the NFL. Remarkably, his last 1,000-yard season came in 2002—when he was 40. That’s two years older than Randy Moss is right now and Moss has been retired for three years.

In second place on this list is Terrell Owens with 15,934 yards—nearly 7,000 behind Rice. That’s like Barry Bonds having 762 career home runs and the second-place player being at just 530—total domination.

The best bet for any current receiver would seem to be Calvin Johnson, but the 30-year-old isn’t even halfway there yet with “just” 11,386 yards to his name. No one’s catching this mark.