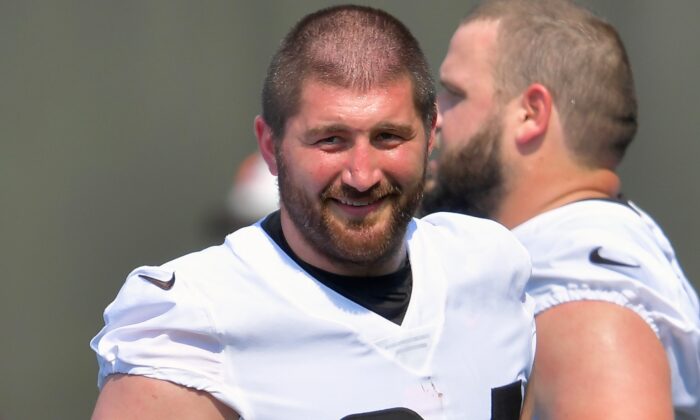 NFL Players Association (NFLPA) President and Cleveland Browns center Joseph Carl Tretter is urging the league to reinstate daily CCP (Chinese Communist Party) virus testing for all players due to the spread of the Delta variant.

“Despite our vaccination rates being extremely high, we have seen that the Delta variant can infect and spread among vaccinated people,” Tretter wrote in a blog post on Tuesday. “That means, at the moment, we are in a worse spot this year than last year because the NFL has backed off a key component of our previous success: daily testing,” he said.

The league most recently announced that nearly 93 percent of players are vaccinated and above 99 percent among staff members.

Tretter’s letter comes just days ahead of the 2021 regular season kickoff. The union agreed last week to update CCP virus protocols so vaccinated players would be tested weekly instead of every 14 days as they were during training camp, although the NFLPA president believes those updated protocols are not good enough.

“Since the beginning of training camp, we have been testing our vaccinated players once every 14 days. It has been ineffective as we’ve had significantly more incidents of transmission inside the building this year than last year,” Tretter said.

“The NFLPA saw this coming months ago and has been advocating for a return to daily testing because it is a more effective way to stop and prevent the spread of the coronavirus in our locker rooms,” he added.

Players who are unvaccinated already have to undergo daily testing, including on off days, according to a previous agreement between the NFL and the NFLPA.

NFL Chief Medical Officer Allen Sills said on Aug. 26 that nearly all positive cases in the NFL have been the Delta variant of the CCP virus, a strain that remains a top concern globally.

“Our challenge right now, and something we discussed with the ownership, is certainly that we are in a major surge,” Sills said. “It is no secret … what the impact of the Delta variant is having. It is a very different disease in many ways. Different in the symptom profile it causes, particularly in vaccinated individuals.”