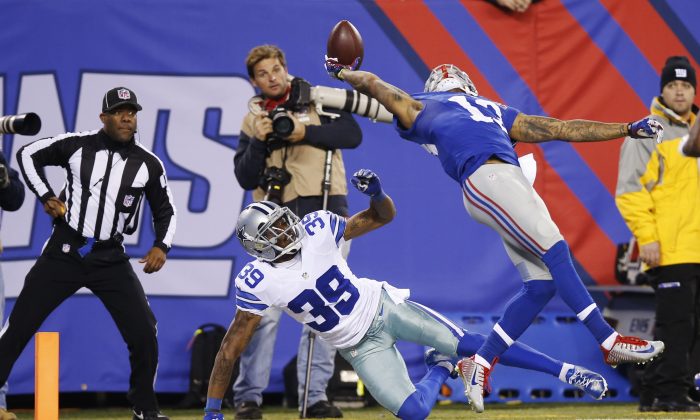 For the age-25 threshold, we list the top 25 players in the NFL under the age of 25. We soon learn that quite a lot of the elite players in the league are youngsters.

Believe it or not, there was a stud on an otherwise abysmal Jaguars offense. The little known rookie was actually Pro Football Focus’s No. 10 ranked guard.

Super potential rookie who filled in admirably for Haloti Ngata last season. With Ngata ousted from the Ravens, Jernigan will now replace Ngata full time and develop into a star of his own.

Bridgewater didn’t have the flashiest stats (he finished 2014 with a paltry 14 touchdowns), but he improved tremendously over the course of the season. Possessing incredible poise under pressure, an ever improving deep ball, and an already seasoned intermediate game, its no wonder Vikings fans are excited for what the future holds.

Knowshon who? After Moreno went down, Miller took the reins and never looked back en route to 1,099 yards and 8 touchdowns on 5.1 yards a carry.

A bulls-eye pick for the Vikings at No. 9 in the 2014 NFL draft. Though considered a positional tweener coming out of college, Barr’s pass rushing abilities fit right in in 2014. His 11 hurries were sixth among 4-3 outside linebackers.

An athletic freak who also has one of the best hands in the NFL. He would be much bigger if he had adequate quarterbacks throwing the ball to him.

One of the finalists for Defensive Rookie of the Year, Mosley’s instincts and play-making ability in his rookie year were uncanny. He looks every bit to be next in line in a tradition of great Ravens linebackers.

Proclaimed in the 2014 draft as a “Vincent Jackson clone,” Evans outplayed his teammate along with most of the league in a memorable rookie season that saw him total 1,051 yards and 12 touchdowns.

An elite guard for arguably the best offensive line in the league.

Trufant is a technically sound and pesky cover corner. Even more impressive is that Trufant pulled off his high level of play on a team with a meager pass rush.

Shariff was inconsistent in his rookie year in 2013, but evolved into a disruptive interior penetrator in his sophomore season. Despite being limited by injuries, Floyd was Pro Football Focus’s No. 5 interior lineman in 2014.

A black hole in the middle of the line, Hankins was arguably the Giants’ best player on defense last season. At age 23, Hankins only looks to get better.

Anderson absolutely stole the show after Montee Ball went down, amassing roughly 800 yards in half a season.

Now with the new regime in Denver looking to emphasis the run game, Anderson is primed for a huge year in 2015 in his first full season as a starter.

Was an elite guard his first year in the league. Though overlooked by Pro-Bowl voters, Bitonio was Pro Football Focus’s first runner up for Offensive Rookie of the Year. Bitonio joins Mack and Thomas on one of the best lines in the league.

Cobb broke out with 1,287 yards and 12 touchdowns in his first season as starter catching balls from MVP Aaron Rodgers. Cobb was arguably the league’s best slot receiver last year.

Maligned for being a reach at No. 31 in the 2013 NFL draft, Frederick is now a perennial top three center.

Top five 3–4 end and cornerstone player for one of the top front sevens in football.

Though oft-criticized for missing on high draft picks, the Raiders finally “hit” with Mack. Mack was already an elite run-stopper his rookie season, and his pass rush continues to improve as he looks to develop into the Raiders version of Von Miller.

First team All-Pro. Plays the most important offensive line position for one of the best lines in the league. Nothing more needs to be said.

Donald is one of two rookies who went absolutely bonkers in their first season. Though “undersized” at 6 feet, Donald was Pro Football Focus’ No. 1 rated defensive tackle and flashed extremely well-rounded play, excelling in both pass rush and run defense.

In the same vein as Donald, Beckham not only blew up for 1,305 yards and 13 touchdowns as the Giants No. 1 receiver, but stimulated social media with some spectacular catches. Of course, it can’t be said for sure whether Donald or Beckham will keep up this level of play, but the potential is certainly immense.

Extremely effective as both a run-stopper and pass-rusher, Richardson would be considered the league’s best 3–4 end after just his sophomore season if it weren’t for J.J. Watt.

An absolute tackling machine, stingy in coverage, and a fiend who makes plays all over the field, Kuechly is all-around linebacker in the truest sense of the word. Kuechly is definitely a top 20 overall player in the league right now.

The NFL’s best young running back and arguably best running back overall. Bell headlines a Steelers offense that aims to score 30+ a game in 2015.