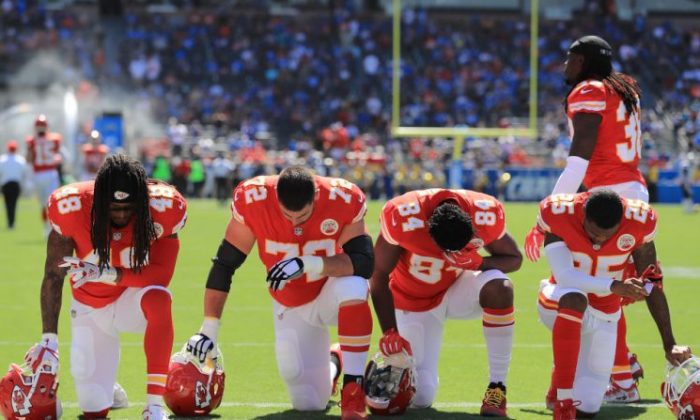 Terrance Smith No. 48, Eric Fisher No. 72, Demetrius Harris No. 84, and Cameron Erving No. 5 of the Kansas City Chiefs are taking a knee before the game against the Los Angeles Chargers at the StubHub Center on Sept. 24, 2017, in Carson, Calif. (Sean M. Haffey/Getty Images)
NFL

National Football League fans are voting with their wallets after a wave of national anthem protests this week.

Ticket sales for NFL games plummeted 18 percent this week compared to last week, according to online ticket reseller TickPick, the Washington Examiner reported. That drop is significantly larger than usual for the time period. Last year sales dropped 11 percent from the second to third week.

“We have seen a massive decrease in NFL ticket purchases this past week in comparison to years past,” said Jack Slingland with TickPick. “Week 3 seems to usually have less ticket orders than week 2, but this year ticket purchases are down more than 7 percent from this time last year.”

The decline in ticket sales was accompanied by a decline in television viewership ratings. NFL ratings were down 11 percent at the three-week mark compared to the same time last year. That trend is a continuation of a yearlong slide that started last year, with ratings falling 8 percent compared to 2015.

Slingard couldn’t put a finger on the cause of the drop in ticket sales but noted that the national conversation this week  focused on the players’ protests of the national anthem.

“As viewers continue to abandon their NFL Sunday habits, both the number of ticket sales and the purchase price of tickets will drop,” he added.

President Donald Trump triggered  an upsurge in the protests by saying that players who kneel during the national anthem should be fired. The players felt the need to respond and team owners mostly let them do as they would. But the sustained outrage from the fans, tumbling ticket sales, dropping ratings, and a slide in brand favorability has league officials scrambling to set football back on a steady course.

Kaepernick said that his motivation for the protest was to raise awareness for police brutality and racial injustice. The quarterback opted out of his contract with the 49ers in 2017, but no team has hired him since.