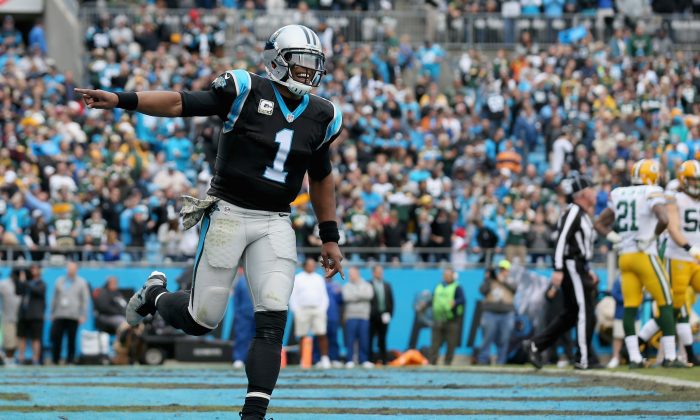 Cam Newton #1 of the Carolina Panthers celebrates a touchdown pass against the Green Bay Packers in the 2nd quarter during their game at Bank of America Stadium on November 8, 2015 in Charlotte, North Carolina. (Photo by Streeter Lecka/Getty Images)
NFL

Newton walked over to retired veteran Mike Dobbs and his family, who were holding a banner with the Packers logo in the shape of North Carolina, and it read, “North Carolina Cheesehead.”

Dobbs at first thought Newton was coming over to greet him for holding the banner, which he said cost $500.

However, Newton instead ripped down the banner and took it with him.

Newton later explained that taking down the sign was to “protect his home,” referring to the stadium where the Panthers play.

“We thought Cam was coming over to talk to us and the crowd around us,” Dobbs said, WSOC-TV reported. “Instead he ripped the banner out of our hands. We all thought it was a joke at first and then he did not return with the banner.”

A #NC family is considering filing charges after #CamNewton ripped down their Packers sign. https://t.co/QJZT2zsswd pic.twitter.com/TY4gqC6fn7

Newton also said that “we take pride in having an edge in playing in Bank of America Stadium, of playing in front of the Carolinas each and every week.”

“I feel it’s my due diligence to protect this house. It wasn’t just about tearing down a sign. It was respect.”

Newton has yet to return it back to to Dobbs.

“We played in Green Bay last year, and I didn’t see no ‘This is Panthers Country’ sign in their stadium,” he said. “I was passing. The sign was dangling. Either somebody was going to take it off, or I take it off.”

“It’s just more of a respect to the stadium,” Newton said, adding that it’s like “sell[ing] a Whopper at McDonald’s.”

According to the Fayetteville Observer, Dobbs went to stadium police and said it was stolen.

“I was just shocked, shocked,” told the paper.

Dobbs said a Panthers employee would make it up to him, the report said.

The Panthers won the game and improved to 8-0 on the year. The Packers dropped to 6-2.