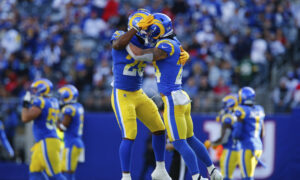 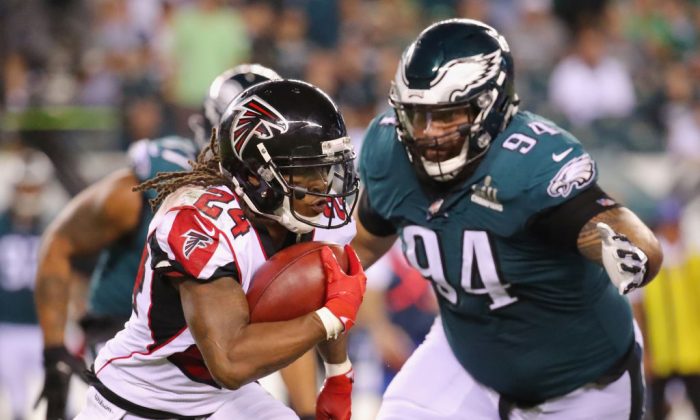 Devonta Freeman #24 of the Atlanta Falcons carries the ball during the second half against the Philadelphia Eagles at Lincoln Financial Field in Philadelphia, Pennsylvania, on Sept. 6, 2018. (Photo by Brett Carlsen/Getty Images)
NFL

The viewership figures are the lowest for an opening game since 2009.

“Even in a TV landscape where ratings and viewership are noticeably dipping, unless you are ‘This Is Us’ or ‘Game Of Thrones,’ those results have to worry the NFL and the broadcasters, especially the still Rupert Murdoch-owned Fox with its pricey Thursday Night Football debuting this year,” the media outlet reported.

NBC says the Eagles-Falcons drew a 13.4 overnight rating. No way to spin that other than disappointing for the league and network We'll see what Sunday brings. https://t.co/mJR5Dkn3I7

The decline in NFL ratings has been attributed in part to the kneeling protests that started in 2016 and have continued to the present day. The protests, taking place during the National Anthem, have sparked a backlash among people who see them as unpatriotic.

Bennett played last year for the Seattle Seahawks and regularly knelt during the Anthem, but stood before one game when the NFL was honoring the military.

Two #PhiladelphiaEagles players — Michael Bennett and Jay Ajayi — took seats on the bench near the end of "The Star-Spangled Banner." https://t.co/5cTRyibYZW

“It was to signify that we are all with the military and that we love them,” Bennett told the Tacoma News Tribune last year. “There’s been this narrative that we don’t care about the military. Today, we were honoring the military, so we wanted to be able to honor the military.

“I know a lot of people did not expect us to stand. They have this narrative about us that is not true,” he added. “I have a lot of family that were military. It’s never been about the military. If there is an opportunity to support them and be grateful for what they do, and the sacrifices, we want to be able to do that.”

Eagles safety Malcolm Jenkins, who often raised a fist during the anthem last season, did not during the anthem before the opener, according to USA Today. He did wear a shirt that read “Ca$h bail = poverty trap” in pregame warmups.