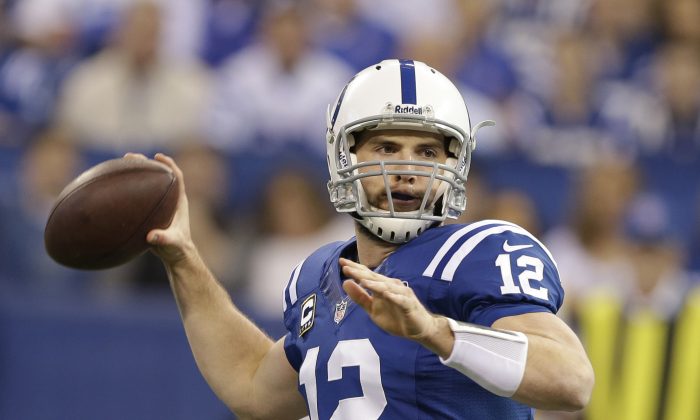 Indianapolis Colts' Andrew Luck (12) throws during the first half of an NFL football game against the Jacksonville Jaguars Sunday, Dec. 29, 2013, in Indianapolis. (AP Photo/Darron Cummings)
NFL

There will be two NFL Wild Card games Saturday and two on Sunday this weekend.

3. Cincinnati Bengals (11-5) – They don’t get a first-round bye after the Patriots won. Won AFC North. The Bengals host the Chargers next week.

4. Indianapolis Colts (11-5) – They don’t get a first-round bye. Won AFC South. The Colts host the Chiefs next week.

5. Kansas City Chiefs (11-5) – The Chiefs get the fifth seed after coming in second-place in the AFC West. No first-round bye.

The Baltimore Ravens, Pittsburgh Steelers, and Miami Dolphins were eliminated.

1. Seattle Seahawks (13-3) – Get a first round bye and home-field advantage throughout playoffs. Won NFC West.

6. New Orleans Saints (11-5) – The Saints get the sixth seed and no first-round bye. Second-place in NFC South.

The Chicago Bears and Arizona Cardinals were eliminated.