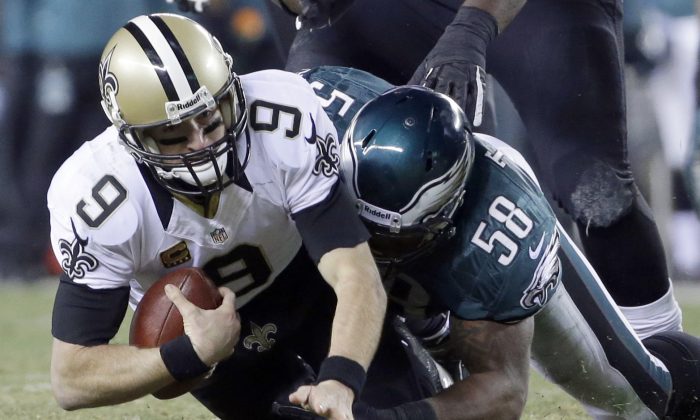 The first games of the NFL divisional playoffs are Saturday and here are the TV times:

The top-seeded Seahawks advanced to the NFC championship game for the second time in franchise history and will host San Francisco or Carolina next Sunday. Seattle last reached the conference title game in the 2005 playoffs.

Seattle shut out the Saints in the first half, got Lynch’s first 100-yard game since Week 10 of the regular season and received a spark from the brief return of Percy Harvin before he left with a concussion. Lynch scored on a 15-yard run in the first half and capped the victory with a 31-yard scoring run with 2:40 left that coach Pete Carroll celebrated by jumping into offensive line coach Tom Cable’s arms.

But Davis said as painful as that memory is, it’s important the Panthers learn from that game and not allow history to repeat itself Sunday when they host the San Francisco 49ers in the NFC divisional playoffs.

The Panthers face a similar situation to five years ago when a pumped-up crowd watched in disbelief as quarterback Jake Delhomme committed six turnovers in the most deflating loss in franchise history — one that sent the organization into a tailspin.

“The valuable lesson is you better be ready for the playoffs,” said Panthers veteran offensive tackle and co-captain Jordan Gross.

The loss has become the elephant in the room for Carolina fans.

Sure, there is a buzz of excitement in Charlotte with the city’s mayor declaring “Fan Friday” for Jan. 10, imploring fans to wear Panthers colors or black to show their support. But while there is anticipation, there’s also an underlying current of trepidation heading into the weekend that another emotional letdown could be looming.

The 2008 Panthers were heavy favorites going into the divisional playoffs and, if they had beaten the Cardinals, they would have hosted their first NFC championship game.

“It seemed like it was set up perfectly for us and then, ‘Bam!,'” offensive tackle Travelle Wharton said. “You look back on it and you’re like, man, we let one get away. The thing you have to learn from it is you don’t get those chances very often. I mean look what happened around here after that game.”

It was a disaster.

The Panthers went from Super Bowl contender to irrelevant in a hurry.

Carolina would start the next four seasons 1-3, 1-12, 1-5 and 1-6 and were never in contention when December arrived. The Panthers released Delhomme one year after giving him a $42 million extension, and they allowed John Fox to leave following a 2-14 season in 2011.

This season appeared headed in the same direction after another 1-3 start, but the Panthers got hot and have won 11 of 12 games to return to the postseason for the first time since 2008.

“That year we were expected to be good — and we were good,” Gross said of 2008. “But we lost, and we lost in a really bad way. It wasn’t a close game. And it was really deflating for this franchise.”

The 49ers (13-4) would love to spoil Carolina’s return to the postseason.

“We owe them,” Kaepernick said earlier this week.

Meanwhile, Davis said the Panthers owe it to themselves to leave it all on the field.

“You never forget that feeling,” Davis said of 2008. “You want to make sure we do everything in our power to make sure we don’t feel that way again. But this is a completely different team and we understand that we have to go out and take care of business.”

DENVER (AP) — No quarterback has been to the playoffs more than Peyton Manning or experienced more heartache there, either.

Only once in his previous dozen trips to the postseason party has Manning put his fingerprints on the Lombardi Trophy.

He also lost his first playoff game in Indianapolis as the No. 1 seed after the 2005 season, then bounced back to win it all the next year. Since then, he’s won just two of seven playoff games and lost his last three.

The meticulous quarterback renowned for his unrivaled work ethic and painstaking preparation doesn’t believe that’s because he grinds too much in January.

“I really don’t believe so,” Manning said as he prepared for Sunday’s showdown between his Denver Broncos (13-3) and the San Diego Chargers (10-7). “I know people — it’s easy to summarize, to take a whole bunch of football seasons and lump them together. I personally don’t believe in that theory.

“I think each season takes on its own identity and different things occurred along the way at different points of my career. This is the 2013 season, 2014 postseason, and it’s its own chapter. We’re looking forward to hopefully writing it for a number of more weeks.”

Manning set a slew of records this season, including 55 TD passes and 5,447 yards through the air as the Broncos became the highest-scoring team of the Super Bowl era. Five players scored 10 or more touchdowns. No team in history had ever had more than three players accomplish that feat.

Yet for all his records and all his greatness, Manning’s fault-finders point to his cold-weather record — it’s 4-7 in sub-freezing temperatures at kickoff — and his playoff pratfalls — his 11 losses are tied with Brett Favre for most in NFL history — to suggest he won’t cap it all off with a championship in the first outdoor Super Bowl in a cold-weather city next month.

Here’s the thing about the cold: In many of those games, Manning had the lesser team. That’s why he was on the road. And sometimes, he only played a series or two because his team had already clinched its playoff slot, but the loss went next to his name nonetheless.

And in the playoffs, you could point the finger at his supporting cast as much as you could at him, if not more.

If Rahim Moore doesn’t make one of the biggest blunders in playoff history last year, Manning would be hailed for his fourth-quarter touchdown toss to beat the Ravens and not lambasted for his interception in overtime. And maybe now he’d be trying to defend a Super Bowl title instead of seeking atonement.

That scarring defeat has driven Manning for 365 days.

So doggedly determined to rectify that disappointment, Manning at times this season seemed in a hurry just to get back here. The regular season took on an air of being 20 preseason games with the real opener coming Sunday afternoon.

Yet, all week, he was relaxed, embracing the pressure of this time of year.

“If it’s just miserable this whole time, then why are you really doing it? I mean, there are other things you can do that might make you feel less miserable than if it’s just an absolute grind,” Manning said. “And maybe, as you get older, you think more in those lines, that, ‘Hey, this is a pretty unique opportunity to be in this position, to be one of just a few teams playing.'”

Manning is coming off his best statistical season at age 37, just two years removed from the neck surgeries that weakened his throwing arm but strengthened his resolve.

Yet, no matter how many more years he has left, he knows he won’t get many more chances. And so, he’s embracing this latest trip to the playoffs and enjoying the journey, relishing his chance to chase redemption and another ring.

“It’s going to be a great atmosphere on Sunday, playing a good football team, and there is nothing else I would rather be doing,” Manning said. “And so that is certainly my goal to enjoy the preparation, not just the game, to actually enjoy the preparation part of it, enjoy being around the guys.

“Because certainly, the light is at the end of the tunnel for me, no question. And so, I think you enjoy these things maybe even more.