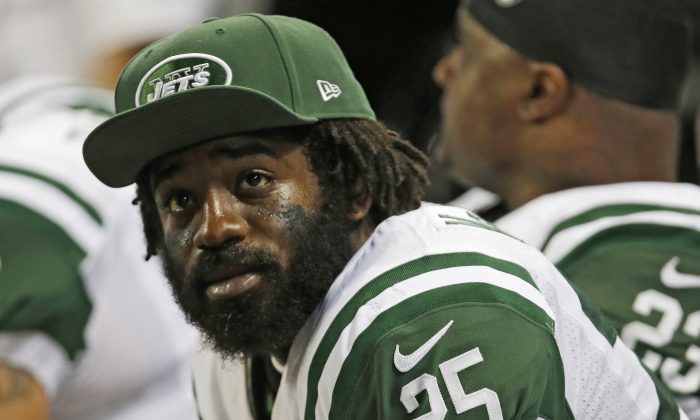 New York Jets running back Joe McKnight watches from the bench during the fourth quarter of an NFL football game against the St. Louis Rams in St. Louis on Nov. 18, 2012. (AP Photo/Tom Gannam)
Sports

NFL ratings fell nearly 10 percent during the 2017 regular season versus the year prior.

The television ratings were down 9.7 percent; a typical game was watched by 1.6 million fewer people this season as compared to last season (14.9 million versus 16.5 million), according to ESPN.

“Last year’s slide was partly attributed to a lost audience due to the presidential election. This year, the NFL was challenged with fans upset at players protesting during the national anthem, an action that led to a league faceoff with President Donald Trump,” wrote Darren Rovell, an ESPN senior writer.

NFL ratings were down 9.7% this season, a steeper decline than last year which was down 8% https://t.co/ToZacwuW4W

After a controversial 2017, NFL ratings decline even more than beforehttps://t.co/xEVOYi22HE

A Rasmussen Reports national survey of 1,000 adults in 2016 found that most viewers were declining to watch football games because of player protests over racial issues.

Many of the viewers who opted to stop watching NFL games are black, according to the survey.

Daniel Rapaport of Sports Illustrated said that the drop was also due to injuries and disappointing seasons.

Over the last 15 years, an internal memo stated, that NFL viewership overall has increased 27 percent, although total prime-time viewership declined by 36 percent.