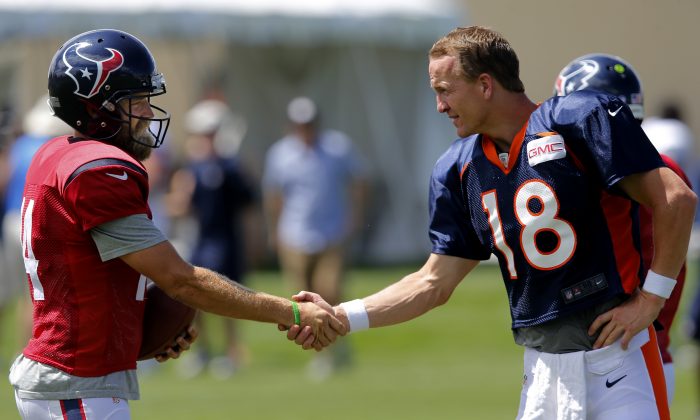 Sunday has two games: the San Francisco 49ers vs San Diego Chargers and the Arizona Cardinals vs the Cincinnati Bengals.

After that during the 7 p.m. time slot, there’s two games. They include the Dallas Cowboys at the Miami Dolphins and the Tennessee Titans at the Atlanta Falcons. At 7:30 p.m., the Washington Redskins play the Baltimore Ravens.

At 9 p.m., the Houston Texans play the Denver Broncos.

Packers, Peppers like direction of top defense
GREEN BAY, Wis. (AP) — The running back darted left with Julius Peppers in pursuit. Through the traffic of blockers and fellow defenders, Peppers met Darren McFadden 1-on-1 to hold the Oakland Raider to three yards.

It might seem like a menial play on the surface in Green Bay’s 31-21 preseason win Friday night. But coupled with a sack and two tackles of losses, it made for a nice home preseason debut for Peppers with the Packers.

“Right now we feel good. That doesn’t mean anything if we won’t take it to the regular season, obviously,” Hawk said.

The Packers had the day off Saturday. They’ll resume practice Sunday and finish up the preseason Thursday against Kansas City.

It wasn’t a perfect night for the starters given the 40-yard touchdown run by Oakland’s Maurice Jones-Drew. A few missed tackles — a problem last season — aided Jones-Drew.

Defensive lineman B.J. Raji’s arm injury is also a concern. He wore a black sleeve on his right arm after coming out of the game in the first half and stayed on the sideline.

But the defense bounced back with four straight three-and-outs. When the Raiders finally got back into Packers territory late in the second quarter, Nick Perry sacked Matt Schaub and forced a fumble recovered by Mike Neal.

That’s another promising development for Green Bay given how coach Mike McCarthy was looking for big plays.

“I think our No. 1 defense … I think we dominated the line of scrimmage. Three-and-outs speak for themselves,” he said.

Peppers joined the Packers in the offseason as a free agent from the NFC North rival Chicago Bears.

Peppers, who has 118 1/2 career sacks, isn’t that impressed with his preseason takedown.

“It was exciting,” said Peppers with a hint of sarcasm, adding he’s getting comfortable with the new scheme.”I’m just trying to knock off a little rust before we get to these real games.”

Perry and Neal are returning outside rushers. Clay Matthews is back, too, seemingly healthy against following a thumb injury last season.

Undrafted rookie free agent Jayrone Elliott followed up his three-sack game last week with a sack and pass deflection against Oakland. With the first cuts approaching, Elliott is trying to make the roster decision at outside linebacker difficult.

There were good signs at safety, another problem area last season. Converted cornerback Micah Hyde bounced back from having missed one of the tackles on Jones-Drew’s touchdown run with a solid game, including a pass deflection and fumble recovery.

Morgan Burnett lunged in the open field to tip away a pass. Sean Richardson forced a fumble.

“You’ve got to be happy with the way the defense bounced back,” Hyde said. “So you know it was tough that first drive, but after that I felt like we got some momentum and we tried to move in the right direction.”

The downside would be if Raji must miss any significant amount of time because of his injury. The veteran had been playing well in training camp after moving from end back to nose tackle in the Packers’ 3-4 scheme. McCarthy said Raji was optimistic on Friday night, although more tests were needed.