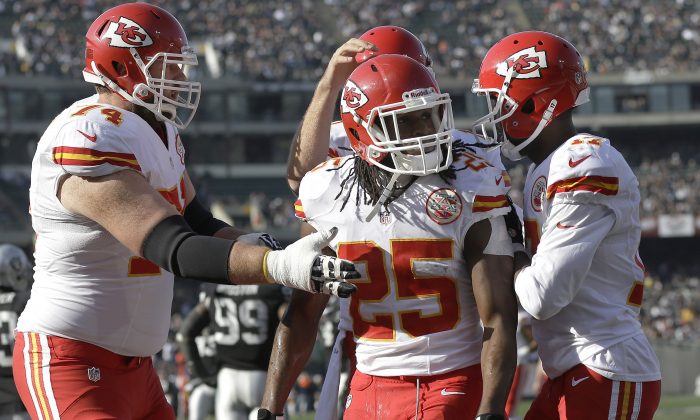 NFL Power Rankings, Standings Ahead of Week 16: All 32 Football Teams

The NFL power rankings and standings have been compiled by AP ahead of Week 16, which starts Sunday.

The Associated Press Pro32 NFL Power Rankings, as voted by a 12-member panel, with first-place votes in parentheses, records through Dec. 17, total points based on 32 points for a first-place vote through one point for a 32nd-place vote, and previous ranking:

Earlier Rankings from The Epoch Times:

1. Seattle Seahawks (12-2) – Seattle is still No. 1 after pummeling Eli Manning and the Giants. The Seahawks looked great playing in MetLife stadium in East Rutherford, NJ, the site where Super Bowl XLVIII will be held.

2. Denver Broncos (11-3) – After a dominant win over Tennessee, there’s a few question marks for the Broncos after losing at home to San Diego. Denver looked sluggish on offense and were shredded on defense by Philip Rivers on Thursday, but that could in part due to poor preparation after playing four days earlier.

3. San Francisco 49ers (10-4) – The Niners have rattled off four wins in a row after trouncing the Buccaneers on Sunday. The run-by-committee attack consisting of Frank Gore and Kendall Hunter performed well, netting a large portion of the day’s 187 yards rushing.

4. New England Patriots (10-4) – The Patriots–again–came within a few plays of winning another close game. One would think that Rob Gronkowski’s presence would have easily boosted New England over the Dolphins.

5. Kansas City Chiefs (11-3) – Jamaal Charles scored four touchdowns in the first half as the Chiefs took an easy lead in Oakland. The normally stout defense, however, surrendered entirely too many points against the rookie quarterback Matt McGloin-led Raiders offense. But Sunday’s game shows the Chiefs can put up a lot of points in a hurry. This game saw 12 touchdowns between both teams.

6. Carolina Panthers (10-4) – Not the prettiest of victories. The Panthers wore out another defense with their brand of grind-it-out, clock controlling offense.

7. New Orleans Saints (10-4) – Ouch. Drew Brees played possibly one of his worst games ever, but his offensive line couldn’t afford him really much protection. He was hit, pressured, and sacked all day, forcing several turnovers.

8. Indianapolis Colts (9-5) – The Colts got out of their own way, scoring early and taking a lead over Houston, limiting the Texans to only 3 points. Indanapolis has clinched a playoff spot, winning the AFC South.

9. Cincinnati Bengals (9-5) – The Bengals didn’t show up until the third quarter and by then it was too late. In the first half, Andy Dalton’s protection was in shambles, and he was pressured often. Cincinnati suffered even more as linebacker James Harrison left the game with an injury amid an already banged-up secondary.

10. Arizona Cardinals (9-5) – The Cardinals defense was a letdown in the fourth quarter, allowing Tennessee to crawl back from a 34-17 deficit. But a win is a win, and Arizona is firmly entrenched in the NFC playoff race.

11. Miami Dolphins (8-6) – The Dolphins got a huge confidence-booster by taking down a tough division rival in the Patriots. Miami is 5-2 after tackle Jonathan Martin left the team amid the Richie Incognito bullying controversy.

12. Baltimore Ravens (7-6) – Baltimore will play the Lions in a pivotal game for both teams.

13. Chicago Bears (8-6) – Jay Cutler’s two interceptions early didn’t faze him, and he threw for three touchdowns and was mostly effective in handling the Browns’ above-average defense, posting a 102 passer rating on the day. Bears’ corner Zack Bowman intercepted a Jason Campbell pass and returned it for a crucial touchdown. A crucial game awaits against the Philadelphia Eagles, who are in a similar situation.

14. San Diego Chargers (7-7) – The Chargers stunned the Broncos–at home, no less–but still need a lot of help to make the playoffs. First, they have to win every game. Second, the Ravens need to essentially tank the rest of the season and third, Miami also has to lose out. But more than anything this season, Philip Rivers has showed he’s still a top quarterback in the league.

15. Green Bay Packers (7-6-1) – The Packers just wouldn’t quit against the Cowboys. Eddie Lacy has proven to be invaluable, rushing for more than 140 yards and a touchdown against the porous Cowboys defense.

16. Philadelphia Eagles (8-6) – The Eagles faced the 3-9-1 Vikings, who were without their starting or backup running backs, and they looked flat all day until the fourth quarter. The secondary played terribly, allowing Vikings’ quarterback Matt Cassel to complete several deep passes that ultimately resulted in scores.

18. Dallas Cowboys (7-7) – Huge collapse. Dallas dominated the Packers in all facets of the game in the early stages of the game, leading 26-3 going into halftime. But once again, the Cowboys defense proved to be a major letdown down the stretch. One also has to question some the Cowboys’ offensive play-calling in deciding to pass more than run when Dallas was gashing Green Bay’s D early on. Tony Romo threw a pick at the end of regulation to give the Packers a win.

19. St Louis Rams (6-8) – Robert Quinn is a monster. The Rams’ defense pressured and sacked Drew Brees all day, forcing the Saints QB to make numerous mistakes, including several interceptions. The Rams are a few players away from being a playoff team.

20. Pittsburgh Steelers (6-8) – The Steelers still theoretically have a shot at making the playoffs but a few other teams have to lose. Against the Bengals, Pittsburgh was dominant from the get-go, nabbing 21 points to start the game. The defense looked vintage, limiting the Bengals to around 90 yards in the first half.

21. Tennessee Titans (5-9) – The Titans showed heart in not giving up in the fourth quarter, but the Cardinals were simply too much. Tennessee’s management is going to take a hard look at its roster and personnel after starting 3-1 before going 2-8 in their last nine games.

22. New York Jets (6-8) – After much ballyhoo about the Panthers’ secondary during the week, Jets quarterback Geno Smith threw a critical interception to Carolina cornerback Captain Munnerlyn, who returned it for a touchdown in the fourth quarter. The Jets likely won’t make the playoffs for another season.

23. Buffalo Bills (5-9) – The Bills looked like they were done early, but gutted out a victory late over the Jaguars. Buffalo plays Miami next week.

24. Oakland Raiders (4-10) – Early in the game, it was 35-10 in favor of the Chiefs, but somehow, the Raiders came back in dramatic fashion before the Chiefs again pulled away. Quarterback Matt McGloin made a more than a few rookie mistakes but played well beyond his years during stretches of the game, passing for more than 300 yards.

25. Cleveland Browns (4-10) – The Browns defense still needs quite a bit of work after giving up 21 points in the fourth quarter against the Bears. Rookie Josh Gordon also seemed to have an off-day after four legendary games.

26. New York Giants (5-9) – Woah. Eli Manning and the Giants’ performance on Sunday may have been the worst turned in by any team this season. While Seattle’s defense is elite, failing to score a single point is brutal. Manning threw a personal record of five interceptions and only passed for 156 yards. This season, Manning has thrown the most interceptions of any quarterbacks in the NFL, besting even rookie Geno Smith.

27. Minnesota Vikings (4-9-1) – Matt Cassel threw for 382 yards–the most a Viking has passed since Brett Favre was a starter–and two touchdowns to put a dent in the Eagles’ playoff hopes. Backup RB Matt Asiata also provided a three-touchdown spark with Toby Gerhart and Adrian Peterson out.

28. Jacksonville Jaguars (4-10) – The Jaguars committed four turnovers in a loss to the Bills.

29. Tampa Bay Buccaneers (4-10) – Tampa had been playing well in recent weeks, but ran into the buzzsaw that is the 49ers defense. The Bucs now close the season playing the St. Louis Rams and the New Orleans Saints in games that likely won’t end on a high note.

30. Atlanta Falcons (4-10) – Both the Falcons and Redskins played very sloppy football, turning the ball over a combined 10 times.

31. Washington Redskins (3-11) – The Redskins coughed the ball up seven times, but Kirk Cousins showed some flashes, passing for 381 yards and three touchdowns. His three interceptions were costly, however.

32. Houston Texans (2-12) – It’s only going to get worse. The Texans will play Peyton Manning and the Broncos next week.