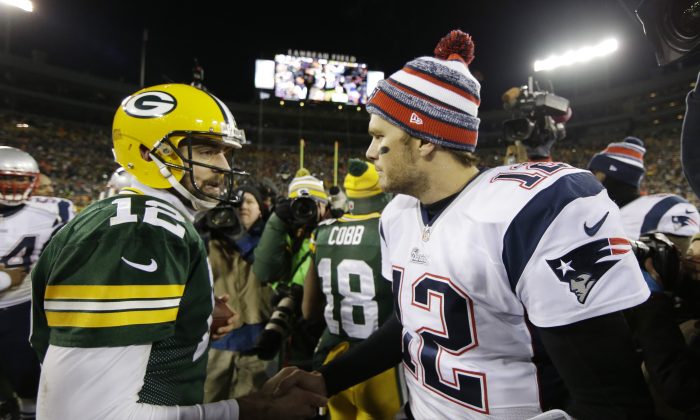 NEW YORK (AP) –Aaron Rodgers and the Green Bay Packers not only ended the New England Patriots’ seven-game winning streak, they also replaced them as the top team in the NFL.

The Packers beat the Patriots 26-21 on Sunday in a matchup of two of the NFL’s best.

“Chapter 1 of the long-awaited Aaron Rodgers-Tom Brady duel goes to Rodgers in a thriller at Lambeau,” Newsday’s Bob Glauber said.

“Can’t help but think there could be a rematch Feb. 1 in Phoenix (at the Super Bowl).”

The Packers (9-3) received 11 of 12 first-place votes Tuesday in the AP Pro32 power rankings, which are decided by a media panel that regularly covers the league.

The Patriots (9-3) got the other first-place vote. New England will look for its 10th win with another tough road game, facing the San Diego Chargers on Sunday night.

The Denver Broncos (9-3) stayed at No. 3 after beating the Kansas City Chiefs 29-16 on Sunday night.

The Seahawks climbed from No. 7 after their 19-3 win over the San Francisco 49ers on Thanksgiving.

The Cardinals have dropped two straight, and their lead in the NFC West has been cut to a game.

“The Cardinals have scored one offensive touchdown during their current two-game losing streak,” said Rick Gosselin of The Dallas Morning News.

The Eagles beat the Cowboys 33-10 on Thanksgiving to grab first place in the NFC East. The teams play again Dec. 14.

“Mark Sanchez’s running, including once for a touchdown, helped open up lanes for LeSean McCoy,” said Jenny Vrentas of The Monday Morning Quarterback. “Stealing a road win against the Cowboys was a big step toward winning the NFC East.”

The Cowboys dropped from fifth to No. 10 after the loss.

“The Cowboys’ defense that played on Thanksgiving looked a lot more like the one we expected to see this season,” Vrentas said. “Their roster is depleted on that side of the ball, and it may be catching up to them.”

“That’s no way to celebrate your first victory of the season,” Kaufman said.