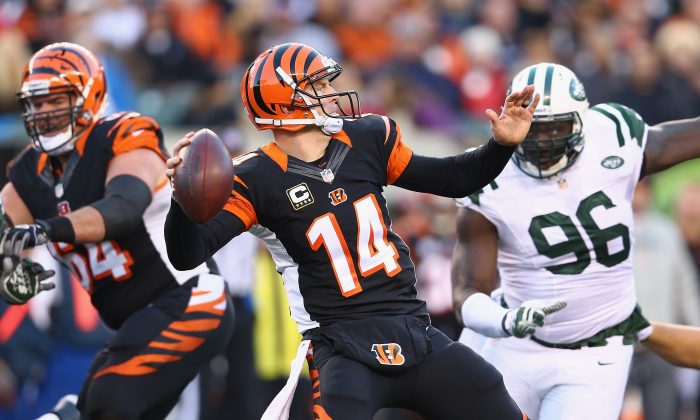 Andy Dalton #14 of the Cincinnati Bengals throws a pass during the NFL game against the New York Jets at Paul Brown Stadium on October 27, 2013 in Cincinnati, Ohio. (Andy Lyons/Getty Images)
NFL

The NFL power rankings for this week have been compiled. Peyton Manning showed that he is still human, Calvin Johnson proved that he isn’t, and the NFC East remains a hot mess.

1. Kansas City Chiefs (8-0) – Kansas City was able to avoid a late-game scare against the Cleveland Browns and remains the lone undefeated team this season. After being released from the 49ers and struggling earlier in his career, Alex Smith seems to have found a good home in KC, passing and handing it off to Jamaal Charles and playing mistake-free. Andy Reid should be the front-runner in the coach of the year taking a 2-14 team last season to 8-0.

2. Denver Broncos (7-1) – Playing the Broncos when they are behind is a scary prospect because when the pressure is on, they seem to play at another level with laser-like focus. The Redskins were up by 14 points early but Denver answered with 38 unanswered ones. Over the past two games, Peyton Manning’s play has appeared to falter; he threw three picks against Washington and couldn’t get it done last week against Indianapolis amid ankle injuries. Next week is a bye, but the Broncos have a murderer’s row for a schedule after that.

3. New Orleans Saints (6-1) – Jimmy Graham didn’t play as much but still grabbed two touchdown passes. The Saints defense stepped up and caused three turnovers. Drew Brees has a new weapon in rookie Kenny Stills who caught 129 yards and two touchdowns. One negative: There weres several personal foul penalites, including a roughing the passer penalty against the Bills’ Thad Lewis late in the game.

5. Indianapolis Colts (5-2) – The Colts had a bye, but last week’s victory over the Broncos and an earlier win over the Seahawks are significant in their overall power rankings. The loss of wide receiver Reggie Wayne for the season hurts, though.

6. San Francisco 49ers (6-2) – Frank Gore and Colin Kaepernick both pounded in two touchdowns and San Francisco rolled over the Jacksonville Jaguars in London. The 49ers have now won five in a row.

7. Cincinnati Bengals (6-2) – The potent mixture of a smothering defense and the big-play ability on offense will take the Bengals far this season. Cincinnati is in firm control over the AFC North–especially when Andy Dalton has passed for more than 300 yards and three touchdowns in each of his last three games.

8. Green Bay Packers (5-2) – Jordy Nelson has emerged as Aaron Rodgers’ top receiving target. He caught six passes for 123 yards and two touchdowns. Jarrey Boykin also stepped up and made some big plays. Eddie Lacy has been a pleasant surprise for the Packers, allowing Green Bay to “close out” games, keeping log drives going, and preserving a lead. Also, Green Bay has a relatively soft schedule for the remainder of the season, starting with the Jay Cutler-less Bears.

9. New England Patriots (6-2) – After going down 14 against the Dolphins, the Patriots answered with 24 points in the second half. However, Patriots fans have to be just a little bit worried with Tom Brady’s overall play this season. The three-time Super Bowl-winner only passed for 116 yards even with Rob Gronkowski available. On the sidelines, Brady appeared to be nursing a swollen hand.

10. Detroit Lions (5-3) – Despite throwing two picks, Matthew Stafford made three amazing plays at the end of the game. He threw two super-accurate passes to get the Lions within the 5 yard line without any timeouts left. But instead of clocking it to stop the clock near the goal line, he snapped the ball jumped over the line before rushing to the side for a touchdown. This doesn’t need to be said, but the Lions need to cut down on their mistakes. Committing four turnovers won’t often generate wins. Stafford threw for more than 488 yards and Calvin Johnson caught 329 (!) yards.

11. San Diego Chargers (4-3) The Chargers had a bye week, but this year’s team is markedly better than last year’s. They play the Redskins at home next week in what should be an offense-heavy game.

12. Arizona Cardinals (4-4) – When the Cardinals mitigate their turnovers, this is a scary team to play. The opportunistic Arizona defense constantly put pressure on Matt Ryan, forcing him to make errant throws, including four interceptions. The one question: Has Arizona’s offense turned the corner or is the Falcons defense that bad?

13. Dallas Cowboys (4-4) – For Dallas, how do you come back from losing a game like this? Jason Garrett has to be kicking himself for booting a field goal at the end of regulation instead of running out the clock more. This was a very, very winnable game for the Cowboys–namely with the numerous Lions mistakes. Dez Bryant made several amazing catches and plays, but was constantly arguing on the sidelines with his quarterback, Tony Romo.

14. Carolina Panthers (4-3) – For the first time in forever, the Panthers are over .500 after smashing the listless Buccaneers. Cam Newton, in a three-touchdown game, appeared to be having fun. Most of the Panthers’ wins have come over struggling opponents, but they’re very much alive in the playoff race.

15. Baltimore Ravens (3-4) The Ravens had a much-needed bye this week after two straight losses.

16. Chicago Bears (4-3) – With a bye week, the Bears got extra time to allow several players to get more healthy, including Jay Cutler. Last week’s loss against the Redskins, who scored 45 points, show the defense has some gaping holes. If Cutler were healthy, this team would be ranked higher.

17. New York Jets (4-4) – During a 49-9 drubbing against the Bengals, The lone bright spot: Nick Folk and his three field goals. Geno Smith’s two pick-sixes forced coach Rex Ryan to pull him in favor of backup Matt Simms in the fourth quarter. Not a pretty, or inspiring, game from the Jets.

18. Tennessee Titans (3-4) The Titans had a bye this week, giving Jake Locker more time to rehab his leg injury.

19. Oakland Raiders (3-4) – Win or lose, the Terrelle Pryor-led Raiders are easily one of the more  exciting teams in the league. Pryor started the game with a 97-yard run for a touchdown–the longest-ever run by a quarterback in the history of the NFL. The revamped Raiders defense also got to Ben Roethlisberger several times, stalling drives and forcing the Steelers to cough the ball up. But there were too many careless mistakes and the offense was too conservative in the second half.

20. Miami Dolphins (3-4) – The Dolphins were up by two scores against the Patriots as Ryan Tannehill turned the ball over three times. Miami has lost four times in a row. Some questionable officiating calls were also called against the Dolphins, including an illegal batting call after a Tom Brady fumble.

21. Cleveland Browns (3-5) – The Browns put up a valiant effort against the undefeated Chiefs, showing that the defense can hang with anyone. Jason Campbell threw for 293 yards and two touchdowns and appears to be an upgrade over Brandon Weeden.

22. Buffalo Bills (3-5) – While the Bills defense appeared to fluster Drew Brees and the Saints at times, quarterback Thad Lewis was sacked four times, and he lost two fumbles and threw an interception.

24. New York Giants (2-6) – The Giants won for the first time on the road all season, doing so with five field goals. A win is a win, but field goals probably won’t cut it against the higher-tier teams. The defense stepped up and crushed the Eagles’ offense, limiting them to only 201 yards and a touchdown. Peyton Hills appears to be a good fit for New York, and Eli Manning played mistake-free. The Giants could possibly make the playoffs this year with how the NFC East is shaping up.

25. Washington Redskins (2-5) – The defense stepped up but couldn’t withstand the Broncos’ second-half onslaught. Against the Broncos, who have best rushing defense this season, the Redskins were able to run the ball well and control the time of possession for the first three quarters until several turnovers. Robert Griffin III appears to be on track for injury after taking several unnecessary hits due to bad protection; during the fourth quarter, he appeared shaken up after throwing his second interception.

26. Philadelphia Eagles (3-5) – The last two games from the Eagles haven’t been pretty. The offense has generated only 479 yards in the past two weeks despite Chip Kelly being at the helm.

27. Pittsburgh Steelers (2-5) – One would think that this season will be offensive coordinator Todd Haley’s last. A still-elusive Ben Roethlisberger was sacked five times amid poor pass protection, and the rushing game wasn’t really there. After being perfect all season, Shaun Suisham missed two easy field goals while the rest of the Steelers special teams, including the punter, played abysmally. Odd fact: Pittsburgh hasn’t won in Oakland since 1995.

28. Houston Texans (2-5) – The Texans had a much-needed bye this week. Both Case Keenum and Matt Schaub were reportedly evaluated by the team during the bye to determine a starter for a divisional game Sunday against the battle-tested Colts. With a win next week, the Texans could still–remarkably–be in the playoff picture.

29. Atlanta Falcons (2-5) – If the Falcons have any shot at making the playoffs, Atlanta’s defense needs to seriously step up. Matt Ryan has thrown nine interceptions against the Falcons in his past two games against Arizona. In this game, he completed 34 out of a whopping 60 passes with four interceptions and appeared flustered amid the Falcons unremitting pressure. The Falcons’ injuries have proven to be too much–even with Stephen Jackson healthy.

30. Minnesota Vikings (1-6) – The Vikings played well in the first half and Adrian Peterson looked sharp. But Minnesota really needs to figure out its quarterback situation–for this season and the next. One play summed up the Vikings’ night defensively: Aaron Rodgers converted a freak 3rd-and-16 play in the third quarter for a touchdown to keep a drive going. The Vikings are at least playing hard but just don’t have enough talent on either side of the ball this year. With Christian Ponder’s 145-yard pass performance on Monday, Josh Freeman will likely start next week.

31. Tampa Bay Buccaneers (0-7) The only reason the Buccaneers aren’t listed as the worst team in the NFL is because they’ve been competitive in some of their losses. Not against the Panthers, however. On Thursday night, one of the few Tampa fans in attendance was spotted wearing a yellow HAZMAT suit in the stands, about summing up the Bucs season so far.

32. Jacksonville Jaguars (0-8) Blaine Gabbert and Chad Henne, who have both started this year, are ranked among the worst in QBR this season among starting quarterbacks who qualify. The Jaguars have lost each game this season by at least 10 points.