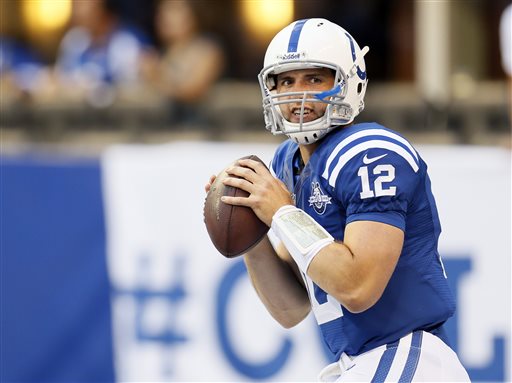 Atop the NFL power rankings this week is a team that likely no one thought would be here by week eight. Another team suffered its first loss, and several other teams started playing more like they were expected to play at the beginning of the season.

1. Kansas City Chiefs (7-0) The Chiefs remain the lone unbeaten team and grinded out a tough victory against the Texans. Houston rookie quarterback Case Keenum was given too much time in the pocket early on and later, Kansas City turned up the pressure, sacking him four times in the fourth quarter. Finally, Keenum took a hit and coughed up the ball, which sealed the game for the Chiefs.

2. Denver Broncos (6-1) Denver suffered its first loss of the season against the Colts mainly due to turnovers and a porous defense that allowed Indianapolis QB Andrew Luck to sustain drives. And even though Manning threw for nearly 400 yards and three touchdowns, he also threw a costly interception in the fourth quarter. Back from a six-game suspension, linebacker Von Miller didn’t impact the game much.

4. New Orleans Saints (5-1) The Saints had a bye week but have a winnable game against Buffalo on Oct. 27.

5. Indianapolis Colts (5-2) After losing against the San Diego Chargers last week, the Colts rebounded with a win over the formerly unbeaten Broncos. Indianapolis capitalized on the Broncos’ mistakes and limited Denver well below its astronomically high season scoring average. The defense sacked Manning four times and forced three turnovers.

6. San Francisco 49ers (5-2) San Francisco has won four games since going 1-2 and will likely go 6-2 when they face the Jacksonville Jaguars next week. According to ESPN stats, in four games, the 49ers defense only allowed 51 points, which is a welcome sign.

7. Cincinnati Bengals (5-2) The Bengals sit comfortably atop the AFC North and have beaten Pittsburgh, Green Bay and New England at home. Andy Dalton lit up the Lions secondary for 372 yards and three touchdowns.

8. Green Bay Packers (4-2) The Packers are now on top of the NFC North by a half-a-game. With all the injuries at the wide receiver position, Aaron Rodgers and Jarret Boykin synced up well, with Boykin catching eight passes for 103 yards and the first touchdown of his career. However, the injury bug still plagues Green Bay, as tight end Jermichael Finley was carted off the field after hurting his neck.

9. New England Patriots (5-2) The Pats were on the cusp of another amazing comeback—this time in overtime, but the Jets were given new life after an odd unsportsmanlike conduct penalty gave Jets kicker Nick Folk another chance to boot the game-winning field goal. QB Tom Brady was also inefficient, passing for 228 yards on 22 of 46 attempts. Rob Gronkowski was targeted 17 times by Brady but could only haul in eight catches. As the season continues on, expect Brady and Gronkowski to connect more often and more efficiently.

10. Dallas Cowboys (4-3) Tony Romo threw for 317 yards and a touchdown, but the Cowboys defense pressured and sacked Eagles QB Nick Foles throughout the day and generally flustered Philadelphia’s offense. The Eagles only scored 3 points and Dallas limited them to only 278 yards total. The Cowboys, however, need to hone in on committing needless penalties.

11. San Diego Chargers (4-3) The Chargers are on the upswing, winning two straight games. The defense limited the Jaguars to only 353 yards total and six points.

12. NY Jets (4-3) The Jets defense intercepted Brady for a pick-six that changed the complexion of the game, leading to an overtime victory and ending a six-game losing streak to New England. Beating the rival AFC East Patriots will be a morale booster for the rest of the season, and the Jets are only a game behind the Patriots.

13. Detroit Lions (4-3) The Lions could have taken Sunday’s game against the Bengals. However, errors on special teams including a blocked field goal forced the Lions to dig themselves out of another hole but came up short.

14. Chicago Bears (4-3) Backup Luke McCown was excellent in replacing injured Jay Cutler, who was out with a groin injury but the Bears defense was anemic after losing cornerback Charles Tillman and linebacker Lance Briggs, allowing Washington to score 45 points.

15. Baltimore Ravens (3-4) The Ravens have struggled with run defense, giving up more than 140 yards in the past two games. Baltimore couldn’t stop Pittsburgh’s final drive in the final two minutes. Ray Rice and the Ravens rushing attack also faltered.

16. Carolina Panthers (3-3) In a game against the Rams marred by personal fouls and fighting, the Panthers mostly kept their cool. Cam Newton posted a highly efficient game, throwing for 204 yards on 15 of 17 passes and a touchdown for the Panthers second win and a row. They face the Buccaneers on Thursday.

17. Miami Dolphins (3-3) Miami had a very winnable game at home against the Bills after coming off a bye week. But Miami played carelessly in the first half for its third loss in a row. Things are looking grim for the Dolphins, who play the Patriots next week and then play the Bengals four days later.

18. Philadelphia Eagles (3-4) When he comes back from injury, Michael Vick will most likely get his job back. Backup Nick Foles turned in one of the worst performances of any quarterback this season, completing 11 for 29 passes for 80 yards. The Eagles offensive line didn’t help much, however.

19. Buffalo Bills (3-4) Buffalo’s defense came up with several big plays, including a pick-six and a strip sack that resulted in a touchdown several plays later. But the offense was generally anemic under backup Thad Lewis and will have to play better next week against the Saints.

20. Pittsburgh Steelers (2-4) After a dreadful first four games, the Steelers appear to have regained some of their defensive pedigree. Two wins in a row will surely build the confidence for this team in order to stay relevant in the AFC North playoff race.

21. Tennessee Titans (3-4) The Titans lost their third game in a row to the San Francisco 49ers but have a bye week to figure out some of their problems before heading to St. Louis. Coming back from injury, Jake Locker played mostly well but made some errant throws.

22. Arizona Cardinals (3-4) The Cardinals were able to pounce on several of Russell Wilson’s fumbles and turned them into points, but Arizona’s offense still struggled mightily. Palmer was sacked seven times against the Seahawks, and he threw two picks in the Cardinals’ second loss in a row.

23. Cleveland Browns (3-4) The Browns offense played abysmally, with Brandon Weeden throwing for only 149 yards on 17 of 42 passes. Next week, Cleveland will have a tough task in the Kansas City Chiefs.

24. Atlanta Falcons (2-4) Receiver Harry Douglas turned in a big performance on Sunday, catching 149 yards in a win that the Falcons needed badly to stay relevant in the playoff picture.

25. St. Louis Rams (3-4) Sam Bradford suffered a knee injury at the end of the game, and there are reports that his injury could be season-ending. With Bradford potentially out for the remainder of the year, it looks like Rams management will have to start looking towards next season.

26. Washington Redskins (2-4) The Redskins defense is still putting up near-historically bad numbers in allowing the Bears and QB Luke McCown to score 42. But Robert Griffin III showed flashes of last season, rushing for 84 yards and passing for 298 yards and two touchdowns.

27. Oakland Raiders (2-4) This season, the Raiders have lost several close games and were on top of the unbeaten Chiefs until the wheels fell off in the second half. The Raiders have a bye this week and will next play at home against Pittsburgh.

28. Houston Texans (2-5) In his first start, Rookie QB Case Keenum played well, throwing for 271 yards and a touchdown and kept the Texans close against the undefeated Chiefs. However, Arian Foster left the game with a hamstring injury and linebacker Brian Cushing suffered a broken leg and a torn LCL that will sideline him for the rest of the season, meaning that the Texans season is looking even more dismal.

29. Minnesota Vikings (1-4) The Vikings will play Monday night, with newly acquired QB Josh Freeman starting against the Giants. Both Vikings QBs, Matt Cassel and Christian Ponder, have both struggled this season.

30. New York Giants (1-6) New York plays “Monday Night Football” against the Vikings in what has been described as the worst “Monday Night” matchup in the show’s history. Both teams are a combined 1-10. TwinCities.com points out that the second-worst game was on Dec. 15, 1975 when the 3-9 Jets played the 1-11 San Diego Chargers.

31. Tampa Bay Buccaneers (0-6) Tampa Bay was in the game against Atlanta but was never able to get over the hump—a familiar trend this season. With a few more loses, coach Greg Schiano’s seat will get even hotter.

32. Jacksonville Jaguars (0-7) The Jaguars have lost every game this season by at least 10 points. NFL.com notes that the Houston Oilers did the same in 1984, losing by double-digits in their first 10 games.