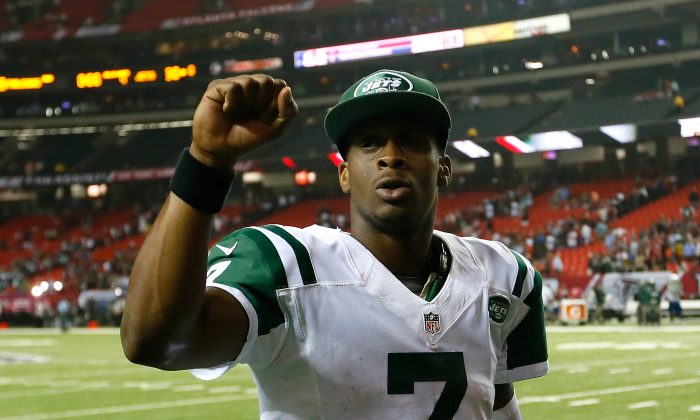 Geno Smith #7 of the New York Jets walks off the field after their 30-28 win over the Atlanta Falcons at Georgia Dome on October 7, 2013 in Atlanta. (Kevin C. Cox/Getty Images)
NFL

Monday Night Football has come to an end and now it’s time for the Week 6 NFL power rankings. Week 5 had some dramatic turns and twists, showing that not every team is invincible.

1. Denver Broncos (5-0) – A scare from the Cowboys, who scored 48 at home against this defense, won’t bump them out of first place. Aside from his first interception this season, Peyton Manning threw four touchdowns and more than 400 yards.

2. New Orleans Saints (5-0) – The revamped defense and high-powered offense look difficult to stop. This team has found its running game again. TE Jimmy Graham is emerging as a superstar in the NFL with six touchdowns.

3. Kansas City Chiefs (5-0) – Arguably the best defense in the game, with the dynamic playmaking ability of Jamaal Charles on offense. The Chiefs lead the league in the turnover differential column. On Sunday, they forced three against the Titans.

4. New England Patriots (4-1) Tom Brady and his receiving corps still aren’t on the same page, scoring only two field goals against the Bengals. Several Patriots receivers dropped balls that should have been caught. The defense is playing markedly improved football, however.

5. Seattle Seahawks (4-1) After a tough loss against the Colts, the Seahawks have the best secondary in the league and a capable defense. Coupled with their offense, which has Marshawn Lynch and Russell Wilson, they’ll bounce back–especially at home.

6. San Francisco 49ers (3-2) Colin Kaepernick hasn’t looked great this season after lighting the world on fire in 2012. But the 49ers still have a more-than-capable defense, an excellent run game, and clock management skills. Like the Seahawks, they’ll bounce back.

7. Green Bay Packers (2-2) The Packers are looking to get back on track after two tough losses already this season, but it isn’t hard when you have Aaron Rodgers–arguably the best passer in the league today. Rookie Eddie Lacy, who was back from injury, ran for 99 yards against the Lions.

8. Indianapolis Colts (4-1) The story for the Colts this season has been their defense, which has kept them in games. Andrew Luck is playing relatively mistake-free and has played with poise.

9. Cincinnati Bengals (3-2) The Bengals boast likely the best defense in the AFC North, limiting Tom Brady and the Patriots to only 6 points and 248 total yards in the rain.

10. Chicago Bears (3-2) The Bears can beat most teams but this crew needs to limit their mistakes and penalties. Jay Cutler threw two touchdowns and 358 yards. There’s also no shame in losing to the red-hot Saints.

11. Baltimore Raves (3-2) This team is still searching for an identity, with its offense and defense playing sub-par for the first quarter of the season. Ray Rice posted a good game against Miami in a win, rushing for 74 yards and two scores.

12. Dallas Cowboys (3-2) In a tough loss, Tony Romo played the best game of his career, putting up Madden-like numbers–506 yards and five touchdowns–but he made a critical mistake towards the end of the game when he threw an interception. The Cowboys have a lot to build on from this loss.

13. Miami Dolphins (3-2) The Dolphins have dropped their last two games, but their defensive front line will get them back on track.

14. New York Jets (3-2) Geno Smith is starting to look like a franchise quarterback, leading the Jets to two comeback victories in his first five games. He made a few poor decisions on Monday night, but was efficient, throwing for 199 yards and two touchdowns on 16 of 20 passes. He also threw no interceptions or fumbled, which has been a lingering problem for the rookie.

15. Detroit Lions (3-2) Without best player Calvin Johnson last week, the team lost a step. Once he returns next week, the Lions will get back on track with Matthew Stafford and the resurgence of Reggie Bush.

16. Tennessee Titans (3-2) Ryan Fitzpatrick started for injured Jake Locker and performed well, throwing for 247 and a touchdown and rushing for 50 yards and a touchdown. However, it wasn’t enough against the efficient Chiefs.

17. Houston Texans (2-3) A quarterback controversy is brewing in Houston after Matt Schaub’s poor play. Schaub threw another pick-six this week against the 49ers and failed to mount any offense for most of the game. Backup T.J. Yates was put in the game in the fourth quarter.

18. Atlanta Falcons (1-4) The Falcons have all the tools to be 3-2 or even 4-1 but poor play from the defense as of late is killing this team. With Monday night’s loss, Atlanta might have to start thinking about next season.

19. Cleveland Browns (3-2) Browns fans were anticipating the play of Bryan Hoyer but got Brandon Weeden instead when Hoyer went down with a season-ending injury. If Buffalo’s E.J. Manuel played the whole game, the Browns may not have been able to eke out a win due to how poorly his backup, Jeff Tuel, played. But it’s a win.

20. San Diego Chargers (2-3) Philip Rivers threw for 411 yards and two touchdowns, but his three interceptions were a key factor in the Charger’s loss against the Raiders. Expect this team to bounce back.

21. Philadelphia Eagles (2-3) The Eagles shredded the Giants but lost Michael Vick to another injury. Nick Foles stepped in and threw for 197 yards under Chip Kelly’s offense. The defense, however, is looking like one of the worst in the league. On the bright side, the Eagles are still only one game behind the Cowboys in the NFC East.

22. Oakland Raiders (2-3) Over the past few years, Terrelle Pryor is showing that he’s made great strides as a passer and a team leader, becoming one of the more electrifying playmakers in the league. The Raiders took down the Chargers’ powerful offense with stingy defense in the second half.

23. Arizona Cardinals (3-2) In an ugly win, the Cardinals crippled the Panthers’ offense and has a defense that shows flashes of greatness. The offense is still anemic but better than last season. [CORRECTION: The Cardinals record is 3-2, not 2-3; The Epoch Times regrets this error.]

24. Buffalo Bills (2-3) Jeff Tuel was inserted in the game for E.J. Manuel, who is out for several weeks, but he played so poorly, the Bills are now starting Thaddeus Lewis–a quarterback who was on the Bills practice squad a week ago. The Bills still have C.J. Spiller and Fred Jackson, and an improved defense.

25. St. Louis Rams (2-3) The Rams won on Sunday but it was against the doormat Jaguars. Sam Bradford played well, throwing for 222 yards and three touchdowns.

26. Minnesota Vikings (1-3) The Vikings just signed Josh Freeman, who could be an excellent addition to help free up Adrian Peterson while AD is still in his prime.

27. Carolina Panthers (1-3) The Panthers only scored 6 points against the Cardinals while Cam Newton threw three interceptions. This team still has a lot of talented young players, meaning it doesn’t need to be completely rebuilt next season.

28. Washington Redskins (1-3) RGIII is looking better but their defense is a liability. But last week, Washington’s defense stepped up big in stopping the Raiders in their first win.

30. New York Giants (0-5) Eli Manning is playing the worst football of his career, throwing 12 interceptions, while injuries have decimated both the offense and the defense.

31. Tampa Bay Buccaneers (0-4) Now that Josh Freeman is out, there have been reports that coach Greg Schiano could be the next to leave, with some saying that Schiano has essentially lost control over the locker room. If the Bucs don’t win soon, Schiano could be the first coach to get the axes this season.

32. Jacksonville Jaguars (0-5) The good news: The Jaguars managed to score 20 points this week in a loss to the Rams. The bad news: everything else (except for MJD).