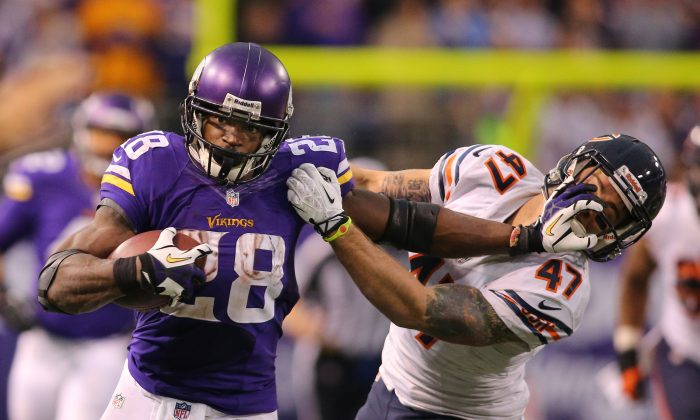 Adrian Peterson #28 of the Minnesota Vikings carries the ball for ten thousand career rushing yards against Chris Conte #47 of the Chicago Bears on December 1, 2013 at Mall of America Field at the Hubert Humphrey Metrodome in Minneapolis, Minnesota. (Photo by Adam Bettcher/Getty Images)
NFL

The week 13 NFL power rankings have been mostly compiled, with several teams essentially falling out of playoff contention.

Correction: The Bengals are in the AFC North, not the AFC East. The Epoch Times regrets this error.

1. Seattle Seahawks (11-1) – After crushing the Saints, it’s safe to say the Seahawks are the most complete football team right now.

2. Denver Broncos (10-2) Peyton Manning overcame two interceptions early on to throw five touchdown passes. Knowshon Moreno had a relatively pedestrian game but Montee Ball filled in adequately, including a 45-yard rush. The Broncos defense made two huge red zone plays, including an Alex Smith interception in the first half and a goal-line stand toward the end of the fourth quarter.

3. Carolina Panthers (9-3) – An eight-game win streak powered by defensive excellence has given this Panthers team serious momentum. But Carolina faces its toughest test yet as they’ll have to play the Saints twice in a three-week span that will likely decide the NFC South.

4. New England Patriots (9-3) – The Patriots average around 11 points more per game with Rob Gronkowski healthy. They survived an early scare against the Texans but Stephen Gostkowski made two long field goals in the fourth quarter to seal it.

5. 3. New Orleans Saints (9-2) – Did the Saints simply have an off night or were the Seahawks that good?

6. San Francisco 49ers (8-4) – Michael Crabtree brings another dimension to the 49ers’ offense. His presence was felt on Sunday–in his first game back from an Achilles injury–when he made the second-longest play for the 49ers against the Rams.

7. Cincinnati Bengals (8-4) – The Bengals held the Chargers to only a touchdown in a pivotal victory to seal Cincinnati’s first-place spot in the AFC North.

8. Kansas City Chiefs (9-3) – Three losses in a row to good teams have the Chiefs reeling. Kansas City will have a chance to recoup some of its losses with upcoming Redskins and Raiders games. In back to back games against the Broncos, the Chiefs weren’t able to sack Peyton Manning. Kansas City has proven that it can put up points on offense, but it needs to find a way to close out close games.

9. Indianapolis Colts (8-4) – Adam Vinatieri, the oldest player in the NFL at 40, provided the bulk of the Colts’ scoring with five field goals. The Colts also didn’t dig themselves into a hole in the first half, which has been a trend this year.

10. Philadelphia Eagles (7-5) – Nick Foles continues to impress, namely in his efficiency. The second-year QB hasn’t thrown a pick all season. He is one touchdown away from tying Peyton Manning’s record of 20 touchdown passes without a pick to start a season.

11. Detroit Lions (7-5) – Detroit is poised to win the NFC North but turnovers continue to be a problem.

12. Dallas Cowboys (7-5) – If the Cowboys are to reach the postseason, they should continue to rely on heavy doses of DeMarco Murray and Lance Dunbar.

13. Arizona Cardinals (7-5) – The Bad Carson Palmer showed up on Sunday against the Eagles in a close loss. He threw two picks and lost a fumble. The Cardinals’ normally stingy defense didn’t play up to par, either.

14. Miami Dolphins (6-6) – The Dolphins appear to be moving past the Richie Incognito-Jonathan Martin bullying scandal with a crushing win over an NFC East rival, the New York Jets. To get into the playoffs, Miami likely has to win out and hope for the Batimore Ravens, who have a similar record, to lose.

15. Baltimore Ravens (6-6) – Joe Flacco’s deep pass to Torrey Smith in the first quarter looked like it was lifted from last season’s Super Bowl run. With a win on Thursday, Ravens are in the thick of the playoff hunt.

16. San Diego Chargers (5-7) – The Chargers are a good team this year, but they might simply be victims of a tough schedule. It was no exception in Sunday’s loss against the Bengals, which means San Diego’s playoff chances are slim.

19. St. Louis Rams (5-7) – The Rams, who have beaten some good teams this year, were riding a win streak but ran into the buzzsaw that is the San Francisco 49ers defense.

20. Green Bay Packers (5-6-1) – Despite losing by 30, the game against the Lions felt a lot more lopsided. The offensive line wasn’t there, allowing backup QB Matt Flynn no time to work in the pocket.

21. Pittsburgh Steelers (5-7) – It’s safe to say that the Steelers’ chances at getting into the playoffs is extremely slim. Not only will they have to win their next four games, but they’ll need a lot of help from other AFC contenders, including the Ravens, to make it.

22. Tennessee Titans (5-7) – Tennessee squandered a chance to get deeper into playoff contention. Ryan Fitzpatrick had mostly played well until this Sunday when he tossed three interceptions and lost a fumble.

23. Oakland Raiders (4-8) – Matt McGloin might be the best rookie quarterback of the 2013-2014 season. He had somewhat of a slump in the second half, but McGloin made quick, accurate throws under press.

24. Buffalo Bills (5-7) – CJ Spiller smashed the Falcons’ porous run defense, but the Bills couldn’t pull out a win in Toronto.

25. Cleveland Browns (4-8) – The Browns desperately need a competent quarterback to throw it to Josh Gordon. He was the first player in NFL history to get consecutive 200-yard games.

26. New York Jets (5-7) – Another season, another quarterback controversy. Coach Rex Ryan benched Geno Smith in favor of Matt Simms, who was equally as ineffective. And while New York’s rush defense is historically great this season, the rest of the team–including the secondary–is completely out-of-sorts.

27. Minnesota Vikings (3-8-1) – Chicago Bears kicker Robbie Gould and Vikings kicker Blair Walsh missed two field goals in overtime before Walsh kicked a game-winning field goal, nearly avoiding putting two ties on its record. Oh, and Adrian Peterson is still the best running back in the NFL after he gashed the Bears defense for 211 yards on the ground.

28. Atlanta Falcons (3-9) The Falcons essentially played–and won–for pride as they became the first team to be mathematically eliminated from the playoffs this year.

29. Washington Redskins (3-9) – Will Mike and Kyle Shanahan keep their jobs after this season?

30. Jacksonville Jaguars (3-9) – The Jaguars’ victory over the Browns marked the first winning streak for the team since 2010. It also means that Jacksonville moves up on the power rankings list.

31. Houston Texans (2-10) – The Texans have lost 10 straight games but played hard against the top-ranked Patriots.

32. Tampa Bay Buccaneers (3-9) – Mike Glennon has shown flashes of promise this season, but his odd fumble-pass is something that he likely wishes he could take back.