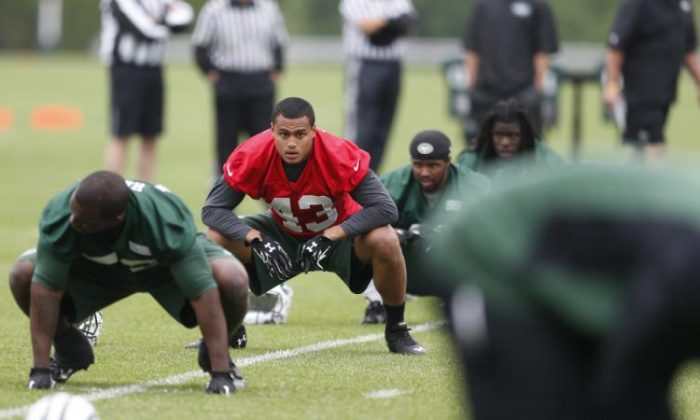 The Jets were down two cornerbacks before Sunday’s practice wrapped, and as the team announced later in the day, they’ll be without at least one of them for the season.

Rookie Dexter McDougle tore his ACL in one-on-one drills that pitted wide receivers against cornerbacks who both were trying to snatch passes out of the air in the end zone. He will likely be out for the entirety of the 2014-15 season.

Wide receiver Stephen Hill reached over McDougle, whose cleat got snagged in the turf as he fell down in the end zone. He was able to walk off the field without assistance.

The same could not be said for fellow cornerback Dee Milliner. The former No. 1 pick in last year’s draft had to be helped off the field after hurting his leg in a defensive drill later in the same practice.

Coach Ryan didn’t want to speculate as to whether Milliner’s ankle was sprained or broken, but thought the fact he was told he rolled it would indicate it could be a sprain.

Milliner struggled as a rookie last year before rebounding with a solid final month. After parting ways with Antonio Cromartie in the offseason, the Jets envisioned Milliner being their top cover guy — and he said during camp he had the confidence to believe he’s the best cornerback in the league.

McDougle was expected to make an immediate impact, either as a backup or potentially as a starter over Patterson. The third-round pick out of Maryland was hurt during a 1-on-1 drill with wide receiver Stephen Hill, who jumped over the cornerback to catch a pass. McDougle went down, tore off his helmet and stayed on his back as fellow cornerback Darrin Walls and wide receiver David Nelson came over to check on him.

“I guess he came down, a cleat got caught,” Ryan said. “I just listened and was there for him, but he felt a sharp pain, and that was it.”

He walked off the field, but was eventually carted to the locker room to be further examined.

“Thank you everyone who has sent me your support and prayers,” McDougle wrote on his Twitter page. “This is a tough blow but I promise, I will be back better than ever. (hashtag)GodSpeed.”

McDougle missed nearly all of last season at Maryland with a shoulder injury, and said he teared up while standing on the field at MetLife Stadium last Thursday night before making his NFL debut.

Ryan said both Milliner and McDougle would have MRI exams to check on the severity of their injuries; the team was still awaiting results on Milliner. With them sidelined along with Patterson, Walls and Ellis Lankster worked with the starters.

Kyle Wilson, Johnny Patrick, Ras-I Dowling and Brandon Dixon are the only remaining cornerbacks. Backup Jeremy Reeves has been hobbled with a knee injury.

“It’ll be adversity for some and opportunity for others,” Ryan said. “We’ll put the best 11 out there and we’ll be able to play defense.”