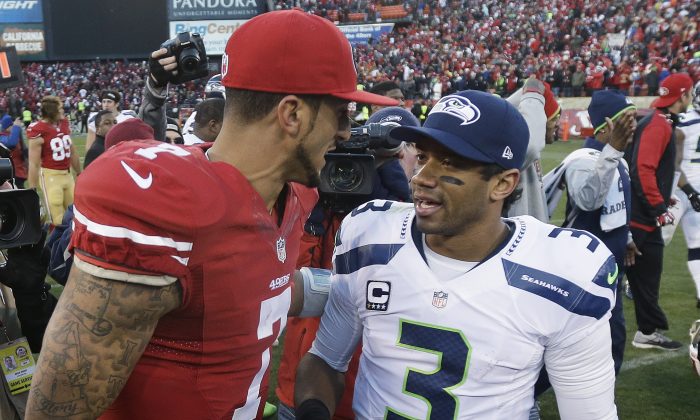 NFL Playoff Schedule 2014: What Time Are the Games?

There’s no NFL playoffs on Saturday, but Sunday has the AFC and NFC championship games.

Seattle, SF in NFC Title Game Meant to Be

SEATTLE (AP) — From the first kickoff back in September, the 49ers and Seahawks seemed destined to meet for the NFC title.

Time to get it on.

With the conference’s most physical, relentless defenses, adept at forcing turnovers and making opponents think twice about, well, just about anything, Seattle (now 14-3) won the NFC West by one game over San Francisco (now 14-4). The offenses, while not nearly as imposing, have the right elements for a champion: strong running games, efficient and sometimes dynamic quarterbacks, and staunch lines.

Their coaches have the proper pedigree, as well. Jim Harbaugh has led the 49ers to the NFC championship game in all three seasons in charge, making the Super Bowl last year. Pete Carroll had a 28-23 record in three seasons as Patriots coach, then went to the college ranks and built a powerhouse at Southern California, with two national titles.

That there’s no love lost between Harbaugh and Carroll dating back to when they both were working in college — Harbaugh at Stanford, where he ran up the score on Carroll’s Trojans — adds plenty of spice.

The sum total on both sides should be a worthy conference champion to meet either Denver or New England in two weeks in the New Jersey Meadowlands for the NFL crown.

Even if both teams are playing down the drama they figure to provide before an ear-shattering wall of noise at CenturyLink Field on Sunday.

“I think it’s pretty much, the game’s a bigger stage and gets you to the Super Bowl obviously,” said 49ers defensive lineman Justin Smith. “But I think for the most part how we’ve gone into every game in the year’s past is we try to be as regimented as possible in how we do things. We’re not going to get all caught up in ‘This game gets us to the Super Bowl or this and that.’ We all know. There’s nothing that needs to be said or a special meeting or anything.”

“It’s like every game,” Seahawks quarterback Russell Wilson confirmed. “Every game is no different even though it’s a championship game and all of that. We talk about playing 1-0 every week, and the game doesn’t change.

“It comes down to not turning over the football, being in the plus in that situation, having a limited amount of penalties; you’re going to get some penalties, especially in a game like this, but not having too many of them.

“The biggest thing is just staying on schedule.”

The schedule brought these teams together in September and December. Seattle won 29-3 at home in Week 2, then lost 19-17 at San Francisco on Dec. 8.

CenturyLink Field might be the toughest venue in the NFL for visitors, with architecture that not only keeps the noise inside the stadium, but funnels it toward the field itself. Wilson became a starter as a rookie in 2012 and went undefeated. He won his first six home starts this season before a stumble against Arizona, but then Seattle defeated St. Louis to finish off the regular season, and New Orleans in a divisional-round playoff last weekend.

“That’s pretty spectacular and it just shows how amazing our fans are, how much energy the city has for our football team,” Wilson said of the supersonic sound levels the 49ers can expect to deal with when they have the ball. “That’s what we’re looking forward to, and we want to bring something special to this city, and to do it we have to play one play at a time and see what happens at the end of the game.”

Not that the 49ers are likely to be intimidated by the surroundings. They went 6-2 away from home in the regular season, and their two road wins have come at venerable Lambeau Field in frigid conditions, and at Carolina, which had won its last seven home games.

“The last time we went up there we kind of lost it in the fourth quarter,” Smith said, “but we’re not too worried about that. We know what we have to do. We split with them. We happen to be up there and we’re ready to play.”