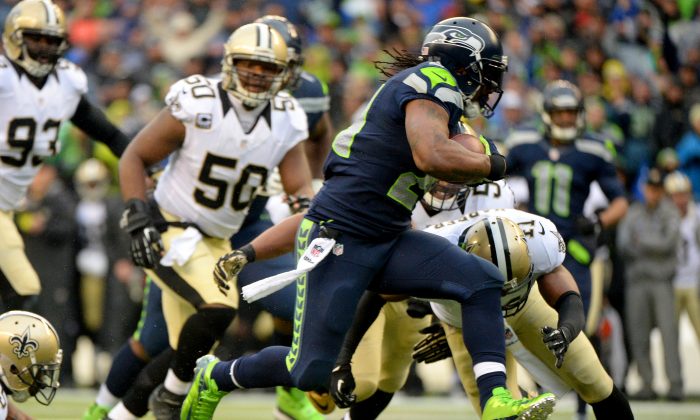 Running back Marshawn Lynch #24 of the Seattle Seahawks scores a touchdown on a 15-yard run in the second quarter against cornerback Corey White #24 of the New Orleans Saints during the NFC Divisional Playoff Game at CenturyLink Field on January 11, 2014 in Seattle, Washington. (Harry How/Getty Images)
NFL

SEATTLE (AP) — When he got around the edge, there was no one for Marshawn Lynch to hit. Directly ahead was open field, the end zone and the Seattle Seahawks’ place in the NFC championship game.

Once again, Lynch overpowered the New Orleans Saints in the postseason.

“That was maybe ‘Beast Mode II.’ I don’t know but it was a very cool way to end that game and give us the score that we needed,” Seattle coach Pete Carroll said.

“You just don’t know how many more opportunities you’re going to have,” Brees said. “That’s what makes it so tough standing up here and talking about it.”

Steven Hauschka added three field goals in blustery conditions and the top-seeded Seahawksadvanced to the NFC title game for the second time. They will host San Francisco or Carolina next Sunday after last reaching the conference title game in the 2005 playoffs.

Seattle shut out the Saints in the first half, got Lynch’s first 100-yard game since Week 10 of the regular season and received a spark from the brief return of Percy Harvin before he left with a concussion. Lynch scored on a 15-yard run in the first half and capped the victory with a 31-yard scoring run with 2:40 left that Carroll celebrated by jumping into offensive line coach Tom Cable’s arms.

“I don’t run to get tackled,” Lynch said.

While the clinching score lacked the stunning explosiveness of Lynch’s “Beast Quake” touchdown run against the Saints in the 2010 playoffs, this one was more important. It ensured Seattle would not be the latest No. 1 seed to get upset by a No. 6 seed in the divisional round.

Lynch’s clinching TD was a similar to that 2010 play. Lynch read the blocking perfectly and cut to the outside using two blocks from tight end Zach Miller and Jermaine Kearse. Lynch’s only contact was a stiff-arm of Keenan Lewis that allowed him free passage to the end zone and left CenturyLink Field swaying.

“It’s all want with him,” Seattle wide receiver Golden Tate said. “He’s blessed with tremendous athleticism and body control and power. But right there he wanted that. He just wanted it and he went and got it.”

Lynch set a franchise playoff record for yards rushing. His running made up for another shaky day passing by Russell Wilson. Seattle’s offense was a concern heading into the postseason and, outside of Lynch, did little to quell those worries.

Wilson missed on five of his first six pass attempts to start the second half but came through with a 31-yard completion to Doug Baldwin with 2:57 remaining. The Saints blitzed and Wilson and Baldwin connected. Lynch scored on the next play.

“At the end of the game I knew they were going to bring everybody,” Wilson said.

Wilson finished 9 of 18 for a career-low 103 yards. His leading receiver was Harvin, making his second appearance of the season after nearly getting put on injured reserve less than two weeks ago. Harvin had three receptions for 21 yards in the first half and one rush for 9 yards, but left the game late in the first half with a concussion.

Carroll said they won’t know Harvin’s status for the NFC championship game until later in the week as he goes through the league’s concussion protocol.

“He was electric. He made some awesome plays today,” Wilson said about Harvin. “… They were trying to find ways to stop him and they were struggling with that.”

Hauschka hit field goals of 38 and 49 yards with the windy, rainy conditions at his back and hit a 26-yarder into the wind late in the third quarter.

Brees finished 24 of 43 for 309 yards and scared Seattle in the closing seconds. Brees took the Saints 80 yards in nine plays, capped with a 9-yard TD pass to Marques Colston with 26 seconds left that made it 23-15.

Colston then recovered the onside kick when it caromed off Tate’s and directly to the Saints’ receiver.

Brees took over at his 41 with 24 seconds left and Jimmy Graham caught his first pass of the game on an 8-yard completion. Brees spiked the ball to stop the clock, then found Colston near the sideline. Instead of stepping out of bounds, Colston tried to throw across the field to Darren Sproles. It was an illegal forward pass and the penalty ran off the final 10 seconds of the clock giving Seattle the victory.

Seattle’s defense also made Graham invisible for the second time this season. He had just three receptions in the first meeting in December and was even less of an option on Saturday.

“We’re not scared of him,” Seattle cornerback Richard Sherman said. “We have to deal with him but he has to deal with us.”

Graham’s lack of production was just part of the Saints struggles, especially in the first half. New Orleans was shut out in the first half for the third time in Sean Payton’s tenure as head coach and first since 2011. Brees was held to 34 yards passing in the half.

There was also Mark Ingram’s costly fumble on the first play of the second quarter that was forced and recovered by Michael Bennett. Two plays later, Lynch danced in for his first touchdown and theSeahawks had a 13-0 lead.

“It’s my responsibility to take care of the football,” Ingram said. “I lost it in a critical moment and they scored a touchdown off of it. That was huge.”

Notes: Colston finished with 11 receptions for 144 yards for the Saints. … Wilson’s previous low for yards passing was 108 against Arizona in Week 16. … Saints K Shayne Graham missed field goal attempts of 45 and 48 yards both wide left into the wind. … This will be Seattle’s third championship game appearance overall, also playing in one AFC title game.

So the 250-pound back who makes long runs routine took off on a 73-yarder and carried the New England Patriots to their third straight AFC championship game with a 43-22 victory over the Indianapolis Colts on Saturday night.

Suddenly, the ground game has replaced Tom Brady as the heart of the Patriots’ offense.

“Once I get into the open field, they’re going to have to chase me,” Blount said. “And if they catch me, they do. And if they don’t, they don’t. They usually don’t.”

They didn’t two weeks earlier when he scored on runs of 36 and 35 yards in the regular-season finale against Buffalo. He also returned kickoffs 83 and 62 yards in that 34-20 victory that gave New England a first-round bye. And they didn’t on his long touchdown that gave the Patriots (13-4) a 36-22 lead early in the fourth quarter against the Colts (12-6).

The Patriots will face the winner of the game Sunday between the Broncos and Chargers. It will be in Denver if the Broncos win, and New England will host it if the Chargers win.

“It’s just a great achievement,” Brady said. “People have counted us out at times this year, but I think we’ve got a locker room full of believers.”