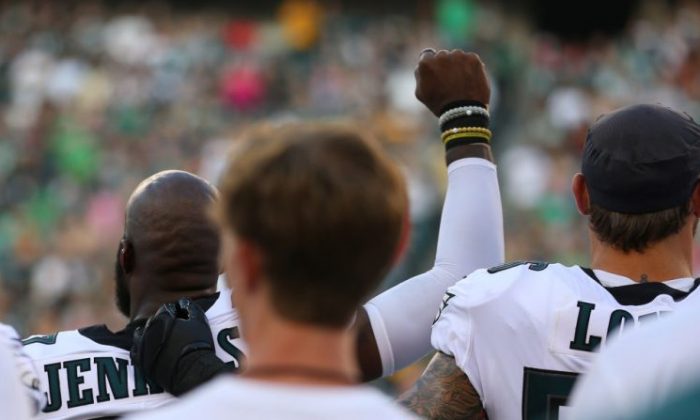 Malcolm Jenkins #27 of the Philadelphia Eagles raises his fist during the national anthem as Chris Long #56 puts his arm around him prior to the preseason game against the Pittsburgh Steelers at Lincoln Financial Field on Aug. 9, 2018 in Philadelphia, Pennsylvania. (Photo by Mitchell Leff/Getty Images)
NFL

The kneeling was supposed to come to an end due to a policy announced by the league in May that would have disciplined any player that didn’t stand during the anthem, but would have allowed players who didn’t want to be present for the anthem to stay in the locker room while it was played.

Instead, the NFL Player Association spoke to top NFL executives and the two groups in a joint statement announced a freeze on the new policy while they negotiated.

The freeze is still in place and negotiations are still ongoing.

Two Miami Dolphins players, wide receivers Kenny Stills and Albert Wilson, knelt before the Dolphins’ Aug. 9 game against the Tampa Bay Buccaneers, who all stood for the anthem. On the Dolphins sideline, defensive end Robert Quinn raised his fist during the anthem.

The Eagles played the Pittsburgh Steelers, none of whom appeared to kneel or raise fists during the anthem, reported NFL.com.

Eagles’ defensive end Michael Bennett was not present during the beginning of the anthem and walked out of the tunnel as it played.

Prior to the anthem being played, three Seattle Seahawks players sprinted into the tunnel leading to the team’s locker room and didn’t re-emerge until after it played.

Before the Baltimore Ravens and New England Patriots played in New England, all players stood but Ravens linebacker Tim Williams stood with his back toward the field. The Patriots observed a moment of silence before the anthem for Massachusetts police officer Michael Chesna, who was killed in July in the line of duty.

An NFL spokesperson told the Chicago Tribune that negotiations about the anthem policy are still taking place.

“The NFL has been engaged in constructive discussions with the NFL Players Association regarding the anthem and issues of equality and social justice that are of concern to many Americans,” the league said in a written statement issued through the spokesman.

“While those discussions continue, the NFL has agreed to delay implementing or enforcing any club work rules that could result in players being disciplined for their conduct during the performance of the anthem.”

However, despite the freeze on punishment for players not standing, the league said it expects players to stand during the anthem.

“Meanwhile, there has been no change in the NFL’s policy regarding the national anthem,” the league’s statement said. “The anthem will continue to be played before every game, and all player and non-player personnel on the field at that time are expected to stand during the presentation of the flag and performance of the anthem. Personnel who do not wish to do so can choose to remain in the locker room.”

The NFL television ratings dropped nearly 10 percent in the 2017-18 season, attributed in part to people upset that players were choosing to kneel during the anthem.

Many of the viewers who opted to stop watching NFL games are black, according to the survey.

A Yahoo Finance poll of just over 9,000 people found that nearly 62 percent of respondents said they would watch less NFL action in the future.

The NFL players are at it again – taking a knee when they should be standing proudly for the National Anthem. Numerous players, from different teams, wanted to show their “outrage” at something that most of them are unable to define. They make a fortune doing what they love……

President Donald Trump has weighed in on the issue multiple times since the protests started.

He issued a new statement on Twitter on the morning of Aug 10.

“The NFL players are at it again,” he wrote,”taking a knee when they should be standing proudly for the National Anthem.”

Trump added, “Numerous players, from different teams, wanted to show their ‘outrage’ at something that most of them are unable to define. They make a fortune doing what they love. Be happy, be cool! A football game, that fans are paying soooo much money to watch and enjoy, is no place to protest. Most of that money goes to the players anyway. Find another way to protest. Stand proudly for your National Anthem or be Suspended Without Pay!”