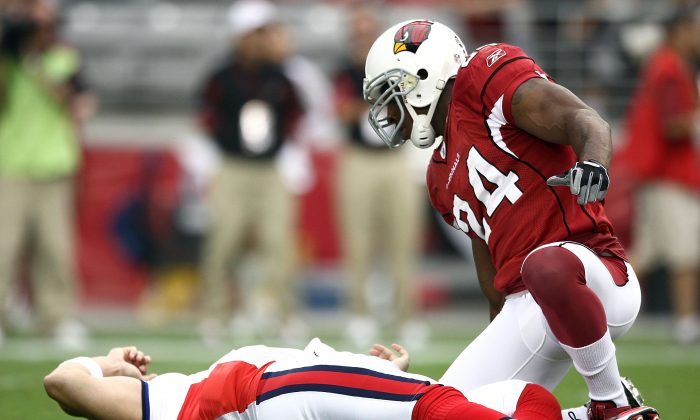 Starting Quarterback Trent Edwards #5 of the Buffalo Bills suffers a concussion after getting hit by Strong Safety Adrian Wilson #24 of the Arizona Cardinals on October 5, 2008 at Stadium in Glendale, Arizona. (Photo by Donald Miralle/Getty Images)
NFL

A top official of the National Football League has finally admitted that the sport is linked to brain damage.

The NFL’s executive vice president for health and safety, Jeff Miller, acknowledged the connection while testifying at a hearing on Capitol Hill before the House Committee on Energy & Commerce on March 14.

He made the statement when he was asked about research done by Boston University neuropathologist Dr. Anne McKee after she asked for immediate steps to limit the risk to young athletes.

“The answer to that question is certainly yes,” said Miller in video recorded testimony.

“Well certainly Dr. McKee’s research shows that a number of retired NFL players were diagnosed with CTE, so the answer to that question is certainly yes,” added Miller, “but there’s also a number of questions that come with that.”

Miller’s admittance is the first public acknowledgement from any senior league official about football’s connection to CTE.

According to Boston University’s research team, CTE is a progressive degenerative disease of the brain found in athletes or people with a history of repetitive brain trauma. The illness is linked to memory loss, confusion, impaired judgment, aggression, depression, and eventually, progressive dementia. The disease can only be diagnosed after the person has died.

We know the answers will come as this field of study continues to advance.
— Brian McCarthy, NFL Spokesman

“He was discussing Dr. Mckee’s findings and made the additional point that a lot more questions need to be answered,” said McCarthy about Miller in a statement via email to the Washington Post.

“We want the facts, so we can develop better solutions,” he said. “And that’s why we’re deeply committed to advancing medical research on head trauma, including CTE, to let the science go where the science goes. We know the answers will come as this field of study continues to advance.”

Miller’s comments and the league’s backtrack comes after Mitch Berger, a member of the NFL’s Head, Neck and Spine Committee denied the link in a press conference before the Super Bowl.