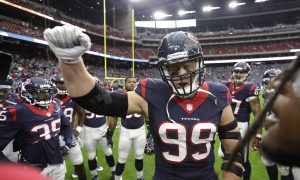 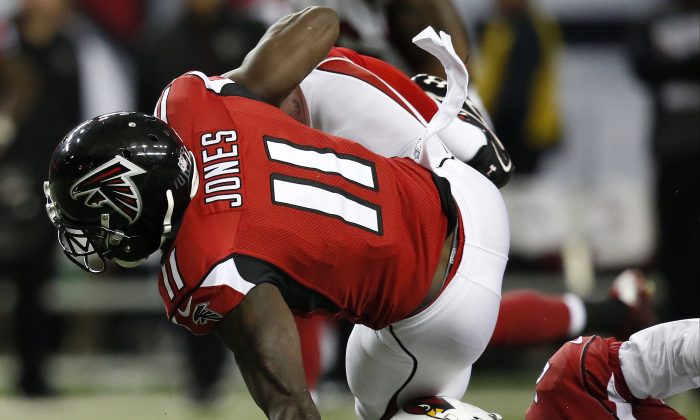 The Falcons gave up five draft picks to obtain Jones at #6 in the 2011 NFL Draft, including their 27th overall pick in 2011 and a first round pick in 2012. You can’t say that their gamble hasn’t payed off. The physical specimen is annually one of the NFL’s top receivers, and often requires a double team to adequately cover. In 2014, Jones had 1,593 yards receiving—good for third in the NFL, and 6 touchdowns.

Through being the top-ranked offensive lineman in his high school class and blocking for collegiate power Alabama, Smith carried considerable hype at the top of the 2009 draft, though he slid a bit in the draft due to a poor combine. Due to injuries and uninspiring play, Smith was considered a bust during his first two seasons in the NFL. But he turned things around in 2011, and then especially in 2012 and 2013, where Smith was widely considered one of the best offensive lineman in the league. The injury bug did come back to bite him in 2014,limiting him to 9 games.

You can say that Russell Okung was the Andre Smith of the 2010 NFL draft, with some considering him #1 overall pick talent. However, aside from a brilliant 2012 season where Okung was the #8 ranked tackle by Pro Football Focus, Okung has been consistently average. He will need to turn in a couple more dominant seasons to catch Smith.

Vernon Davis has really had a patchwork career, with some seasons being noticeably good and others being noticeably bad. Coming out of college, Davis carried a massive amount of hype, due in part to the staggering numbers he posted at the 2006 NFL combine. With an athleticism almost never seen before at the tight end position, some even expected Davis to revolutionize the tight end position in the NFL. Unfortunately, Davis’ first few seasons in the league were very pedestrian, a disappointment which culminated in a benching by coach Mike Singletary in 2008. However, Davis turned things around in his 2009 season, compiling 965 yards and 13 touchdowns—more touchdowns than his first three years combined. Among his good seasons, Davis also had a stellar 2013 season, where he totaled 850 yards and 13 touchdowns. But if we take into account the bad seasons, Davis’ 2014 season was pretty atrocious, where he had only 245 yards and 2 touchdowns to show for his 14 games. Davis’ 2012 season was a bit of a downer as well. Generally speaking, Davis has a good body of work in the NFL, but consistency has been an issue.

Having played in the league for just two seasons, we can’t say anything conclusive about Mingo. But after struggling his rookie season, Mingo showed great promise in his sophomore season, and has the makings of a stellar NFL linebacker for years to come.

The potential of Mingo trumps the erratic play of Landry. Though Landry did not have some strong seasons—particularly in 2008 and 2010, he has mostly been a liability at safety during his stints with the Redskins, Jets, and Colts. Landry is currently a free agent and is suspended for the first 10 games of the 2015 season for the use of performance enhancing drugs.

The man formerly known as “Pacman” was the highest defensive player selected in the 2005 draft and a kick and punt returning ace. He was flagged however, for his off-the-field problems, and it was indeed off-the-field problems that nearly ruined his career. But after implosions on the Titans and Cowboys, Jones was given another opportunity by the Cincinnati Bengals in 2010, and his slate has been clean ever since. Today Jones is not only an elite returner, but also considered one of the best nickel corners in the NFL. If Jones can keep his play up for a couple more seasons, it may be a pretty good career when it’s all said and done.

Like Jones, Claiborne was also obtained through a team trading up to #6 to get him—here, the Dallas Cowboys. Unfortunately, Claiborne has not only been plagued by injuries during his three seasons in the NFL, but demoted from the starting lineup due to poor performance. Currently a marginal backup player, Claiborne hopes to have a big year in 2015.

Matthews’ struggles have been well documented during his one season in the NFL. He was Pro Football Focus’ worst performing tackle in 2014.

Known as one of two players to record a sack against Michigan All-American Jake Long in college, Gholston barely made it onto the field in the NFL and was ran out of the league in just three seasons.