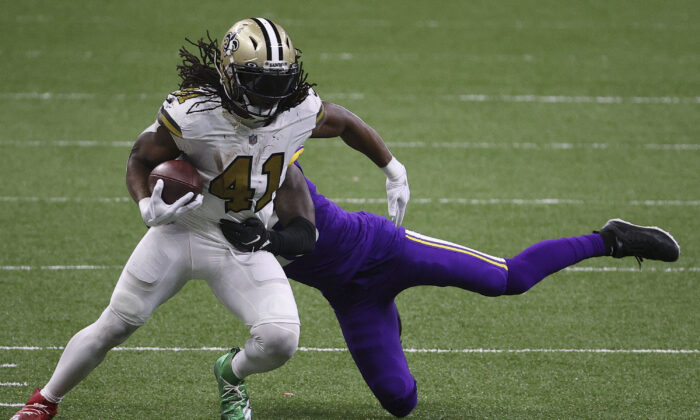 Alvin Kamara #41 of the New Orleans Saints makes a reception past Jeff Gladney #20 of the Minnesota Vikings during the fourth quarter at Mercedes-Benz Superdome in New Orleans, La., on Dec. 25, 2020. (Chris Graythen/Getty Images)
US News

Jeff Gladney, an NFL cornerback with the Arizona Cardinals, has died following a fatal car crash on May 30, his agent Brian Overstreet confirmed to ESPN on Monday.

Reagor wrote of his last exchange with Gladney.

My last words with you bro pic.twitter.com/PGn3gyauCg

Gladney was 25 years of age when he passed away. He entered into a two-year contract with the Arizona Cardinals in March 2022.

Previous to his contract with the Cardinals, Gladney was drafted by the Minnesota Vikings in the first round in 2020. He was released in August 2021 following an indictment for domestic violence. He was not convicted.

Jeff Gladney was indicted by a Texas grand jury and charged with domestic violence by impeding breathing, for “intentionally, knowingly, and recklessly“ causing bodily injury and applying pressure to a woman’s neck and throat. If convicted, he could serve up to 10 years in prison https://t.co/GOcr7bgNGw

The late Gladney had a 1-year-old son from a prior relationship before his death. He celebrated his son’s birthday earlier this year.

“Happy 1st birthday to the lil guy who came in and changed my life. From the first time i laid eyes on you I’ve been in love. You wouldn’t understand how the thought of you has gotten me through many of my darkest days. Although we have many many more birthdays and memories to come this one is special. Daddy got you 4L my lil spoiled man,” Gladney wrote on Instagram.

“We are saddened by the tragic death of former Viking Jeff Gladney. Our hearts go out to his family and friends, as well as the Arizona Cardinals organization and Jeff’s current and former teammates and coaches who are mourning his life lost much too soon,” the Minnesota Vikings said in a statement on its official Twitter account on May 30.