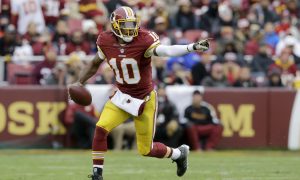 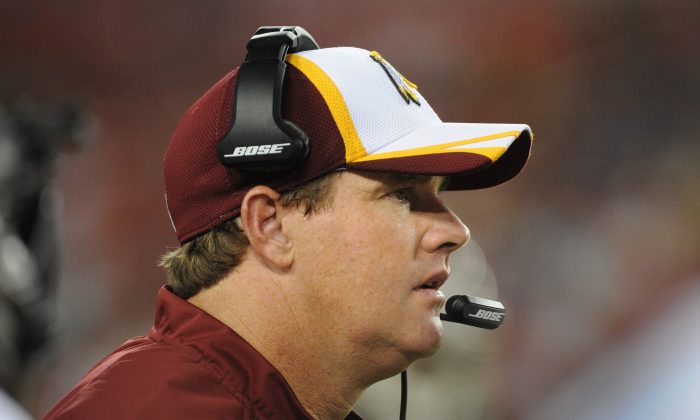 In each of the past three NFL seasons, at least one first-year head coach has been canned. Could the Redskins’ Jay Gruden make it four straight years?

Gruden isn’t making many friends inside the clubhouse and out. The Redskins are 3-7 and struggling on both sides of the ball, while fans and football analysts question Gruden’s decision to play  Robert Griffin III at QB instead of Colt McCoy, who is 2-0 this year in games he’s started.

And it certainly doesn’t help that Gruden made a rookie coaching gaffe after the Redskins’ loss against the lowly Buccaneers Sunday. After RGIII called out everybody on the team, Gruden said on Monday that Griffin “needs to worry about himself and not everybody else,” publicly chastising the former first-round pick.

Gruden later recanted, saying it was a “mistake” and that it “wasn’t the right thing to do.” But it begs the question: Is Gruden’s job on the line?

It’s a strong possibility. Redskins owner Daniel Sndyer isn’t one to be patient. He’s fired a first-year coach before, jettisoning Marty Schotenheimer after the 2001 season even after a respectable 8-8 campaign.

Rex Ryan’s Jets are 2-8. It’s been four years since the Jets last had a winning record or made the playoffs.

If he were any other coach, he’s be on the hot seat already. But Jets players have Rex Ryan’s back, and if he were to be fired, there might be a mutiny.

Owner Woody Johnson isn’t dumb, and he sees that. That means bad news to fans who want to see Rex Ryan gone.

Defensive linemen Sheldon Richardson and D’Brickashaw Ferguson, speaking with Newsday’s Bob Glauber, had plenty of praise for him after week 11. Ryan is a “great coach,” Ferguson said, according to Glauber. Richardson says Jets management should “let [Ryan] build the team” because he “still has this locker room.”

Jets linebacker said that there have been no clubhouse conflicts because of Ryan. “The reason we stayed together talks about [Ryan’s] leadership, and it says a lot about him,” he told Newsday.

It’s no surprise Ryan was lauded by his players on defense. He’s widely known for his defensive mind. The Jets aren’t 2-8 because of their defense; they’re 2-8 because they rank dead last in the league in passing yards per game with 178.5. Rex Ryan has played the cards he has been dealt. Instead of him, GM John Idzik could be Woody Johnson’s scapegoat should the Jets end up with a top-5 pick in next year’s draft.

Trestman Likely Out After the Season

First, Bears coach Marc Trestman lost the fans with blowout losses against the Patriots and the Packers (twice).

Then he lost the media. Reporters covering the Bears have increasingly noticed that Trestman has become “salty” answering questions and dealing with public criticism.

Now it seems like he’s lost the locker room, too. His relationship with quarterback Jay Cutler can be best described as tense, as Cutler has been hinting that Trestman and the coaching staff have been holding the team back.

The Bears defense also held a players-only meeting last week before their win against the Vikings. Trestman brushed it off as a positive for everyone, but it can also be interpreted as a vote of no confidence for the second-year coach.

The Bears are 12-14 under Trestman, and the Bears haven’t made the playoffs in four seasons. No one will be surprised if Trestman isn’t afforded the the benefit of the doubt or given another year to turn the Bears around.