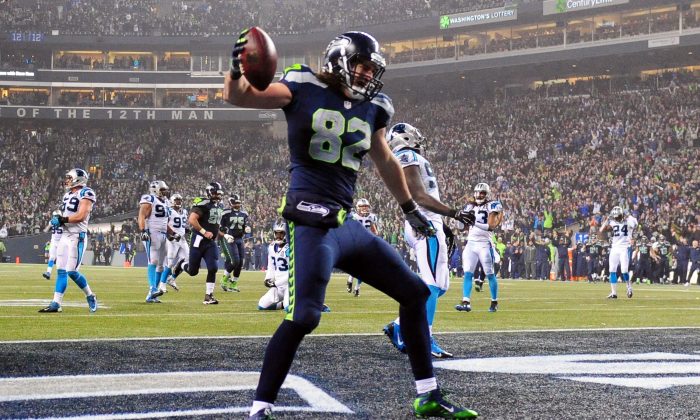 Luke Willson #82 of the Seattle Seahawks celebrates after scoring a 25 yard touchdown in the fourth quarter against the Carolina Panthers during the 2015 NFC Divisional Playoff game at CenturyLink Field on January 10, 2015 in Seattle, Washington. (Photo by Steve Dykes/Getty Images)
News

The NFC championship game is coming up soon, and will definitely include the Seattle Seahawks.

The Seahawks defeated the Carolina Panthers on Saturday. They’re the top seed in the NFC.

The Seahawks will play on Sunday, January 18 the Green Bay Packers, which beat the Dallas Cowboys.

The game, which will kick off at 3:05 p.m. EST, will be at Seattle’s home stadium, CenturyLink Field.

The game will be broadcast on FOX.

A live stream will also be available through FOX.

Tickets will go on sale on Tuesday, January 13, at the stadium’s box office.

The Seahawks say that only 1,200 tickets will be available to the public, and fans can purchase two tickets per person.

The other tickets are either reserved by season ticket holders, or will go in a lottery to Blue Pride season ticket waitlist members.

The winner of the NFC championship game will advance to Super Bowl XLIX, which will be at the University of Phoenix Stadium in Glendale, Arizona.

The Super Bowl is slated for Sunday, February 1.