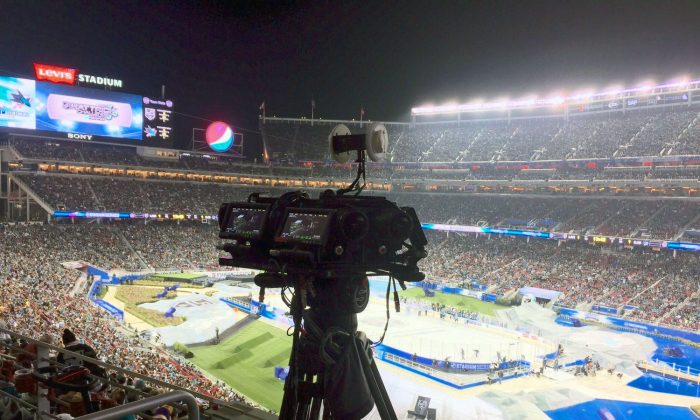 Forget those long lines at the AT&T Park ball game—virtual reality (VR) may allow you to enjoy live football, baseball, or basketball games, without even leaving your couch.

Brad Allen, executive chairman of NextVR, showcased the California company’s live-streaming 3-D VR technology at a San Francisco event on May 6, according to Re/code. Instead of gaming or military training, the company is using VR to target live sporting events, such as basketball, hockey, or car racing.

Users can put on the VR gadget and experience a 360-degree live sports game. At the event, NextVR loaded some short clips from NASCAR, ice hockey, and others. The clips were recorded in 180 degrees or 360 degrees, so when the user put on the VR gadget, instead of seeing a TV screen in 2-D, they could turn and see various angles of the event, as though they were actually there.

The company outputs their clips into Samsung’s Gear VR headset, which is now available to the public. One just needs to load the clips, or the program provided by NextVR, into a Samsung Galaxy Note 4, used with the headset, to experience the 3-D VR sports event.

Early in March, Fox Sports had already tested NextVR on its Nascar broadcast of Auto Club speedway in Fontana, California. “The footage was streamed to FOX Sports executives and producers in the FOX Sports at-track television compound,” the press release stated.

While Oculus and Sony focus on the VR headset hardware, NextVR is specializing in capturing content and broadcasting it to viewers for the VR experience. According to its website, NextVR has a custom system of capturing and delivering live and on-demand virtual reality experiences in true broadcast quality.

When asked about the potential impact to stadium attendance, the company’s executive chairman said, “It doesn’t replace being there, the energy you get from being around everyone else. There’s nothing like being at a game.”

Not limiting itself to sports games, the company also filmed 3-D experiences of live concert performances, including the rock band Coldplay.