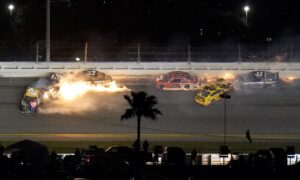 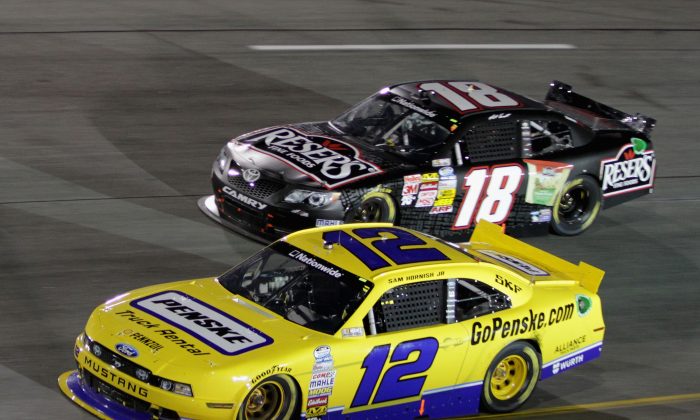 Next Up in NASCAR: Female Crew Chiefs?

It was difficult to turn on a sportscast Tuesday or Wednesday without hearing about the NBA’s San Antonio Spurs hiring Becky Hammon as an assistant coach.

In NASCAR, the equivalent to a head coach would be a crew chief. No woman has ever been a crew chief for a regular competitive national series NASCAR team.

While there have been woman drivers, like current star Danica Patrick, there also are several women working in the garage. NASCAR has female officials and it is not rare to see women handling tire preparation or even going over the wall on pit road, especially on smaller teams in the development series.

But no woman has ever risen to the position of crew chief.

There may be some in the making, though. There are at least two women who play significant roles on road crews of national series teams who could be considered crew chiefs in the future.

Andrea Mueller is the head engineer for Team Penske’s No. 22 Nationwide Series team, which has three wins with Brad Keselowski this season and won the owners championship last year with 12 victories with four different drivers.

Ashley Parlett, a suspension mechanic on the truck series team at Turner Scott Motorsports, is a former car chief at RAB Racing in the Nationwide Series and a car chief on a K&N Pro Series East car last year. A car chief is responsible for getting the car set up to the crew chief’s specifications.

Both women have racing in their blood. They both raced as youngsters. Their paths, though, have been quite different.

Mueller, 34, has an engineering degree from Cal Poly and spent time working for Boeing and Pratt & Whitney doing projects for the space shuttle program at NASA. She hounded her racing friends at Penske for a job until they relented and hired her in 2007. She has been in her current position for three years.

Being a crew chief isn’t necessarily her goal. A crew chief is as much an administrative job as a hands-on position these days, and she likes the more hands-on aspect.

“More so I want to stay on the race engineering side, obviously making it up to the Cup level,” Mueller said in a phone interview. “Down the road, as I get more experience, my mind may change but right now it is more so directed on a race engineer career.

Parlett began her career in NASCAR about 10 years ago when she was doing the decaling for Kelly Sutton’s truck and hung out in the shop, learning more about the mechanics. She bounced around to a few teams like most mechanics and ended up at RAB Racing.

“I definitely have my goals set on being a crew chief one day,” said the 31-year-old Parlett. “How realistic that is without some sort of engineering degree by the time I’m ready for it, I don’t know if it is possible because so many crew chiefs nowadays have engineering degrees.

When Parlett’s team at RAB started to start-and-park, she left the mechanic side of the sport for two years, working one year for a brake company and another doing social media for Speed TV.

“When we were just working our (butts) off to go to the racetrack and start-and-park, it crushed my dream — it destroyed my love for the sport,” she said. “It took two years of physically being away from being a mechanic to realize that I actually really love being a mechanic.”

The road to becoming a crew chief is a long one for men, so it’s no surprise that Mueller and Parlett have had winding paths.

Mueller went to engineering school to become a race engineer but it took several years before she got a job in racing. She joined Penske in 2007 and it took five years for her to become the top engineer for one of the teams. She had done some race engineering for one of the part-time Penske teams and also was in a data acquisition role during her climb. Even with her education and NASA background, it still wasn’t a matter of just stepping in and becoming a head engineer.

“It’s a very steep learning curve, but if you’re doing something you like, it makes it worth it,” Mueller said. “It definitely was a challenge to start.”

If there’s one thing in common with these two women, it is their desire, which is common no matter the position in racing. Being a woman has not been a hurdle for them.

“I’m very fortunate, growing up I raced a little bit and it was never uncomfortable or awkward and never has been an issue,” Mueller said. “Before people started asking me (about being a woman in the garage), I didn’t even notice it.”

Parlett said she believes it’s been easier to stand out.

“I don’t think it was any harder for me to get those jobs than it was for any other guy trying to make a name for himself,” she said. “If anything, I stood out a little bit more because people actually pay attention when I work.”

They both have received letters from aspiring women who want to get into racing.

“With the success we’ve had on the 22 team, more and more people have seen me on TV and there’s been a lot more emails and letters sent, which is really exciting to see,” Mueller said. “People wonder what it is like. It is like anything else, you have to want to do it.

“There’s no reason that women can’t be race engineers or be crew chiefs.”

Parlett admits her path has been rough and says she doesn’t know many women who would want to follow in her footsteps. But her advice to other aspiring female racers is to volunteer working on a car at a local short track. She doesn’t hear back all that often.

“The girls that are like me that do want to be a mechanic, they’re not writing those letters — they’re already at a short track somewhere learning on their dad’s racecar,” she said.

Richard Petty, the seven-time Cup champion and team co-owner, said he has had female engineers for more than 10 years. He expects to see female crew chiefs one day, in part because he sees the evolving technology attracting more women than the traditional mechanical side.

“They could very well (be crew chiefs), especially with how technical it is now because crew chiefs really don’t have to get their hands dirty,” Petty said. “They make decisions and they’ve got car chiefs and all that. … We had one (female) at Petty Enterprises 10 or 12 years ago, way before anybody thought about ladies coming into that deal.

“We looked at it as technology is what is going to drive it all. When you punch them buttons, they don’t know whether it’s a male or female.”

Male or female, acceptance on the crew doesn’t depend on gender.

“From the time you walk in, if you in some way take some of their load off of them for what they have to do for the day and you don’t leave anything loose, trust is automatically given,” Parlett said.

“It’s the same for guys. You come in, work hard, get everything tight, everyone has respect.”