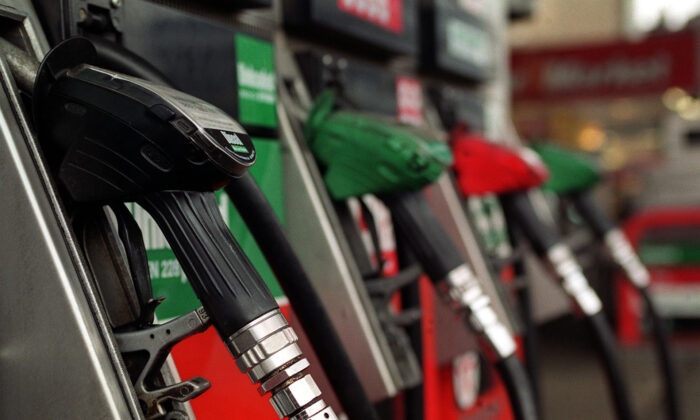 Petrol pumps at a Texaco petrol station in the UK, in an undated file photo. (Michael Crabtree/PA Media)
Investment

The inboxes of the UK’s two Conservative Party leadership candidates have been flooded with e-petitions urging them to slash the fuel duty immediately by 25 pence per litre, according to FairFuelUK.

The advocacy group for drivers stated that since it started the campaign on Aug. 21, more than 20,000 emails have been sent to Liz Truss and Rishi Sunak, who are vying to become the country’s next prime minister on Sept. 6, as well as two Conservative Party chairmen, urging the candidates to “pledge they will CUT Fuel Duty BIG like the rest of the EU has done so,” and promise to “introduce a pump pricing regulatory body called PumpWatch to stop the greedy profiteering in the fuel supply chain.”

The email campaign comes as the soaring global energy prices and food prices drove the UK’s inflation rate to double-digits in July for the first time in 40 years. And inflation is forecast to hit more than 18 percent next year by U.S. investment bank Citi.

Manufacturing has been hit by waning customer demand and shortages of labour and input, and the Bank of England’s forecast states that the UK is set to go into recession in the third quarter and won’t see economic growth for another year.

Speaking to The Epoch Times on Aug. 24, Howard Cox, cofounder of FairFuelUK, said lower fuel prices will reduce inflation and boost consumer spending and that “therefore the economy would benefit.”

More importantly, he said, cutting fuel duty would reduce the “huge fuel costs” for small businesses, the haulage industry, and the internet economy, which he said is a “distribution economy.”

Cox also said members of the Road Haulage Association, the main backer of his campaign, are “suffering considerably” over rocketing fuel prices because “suddenly half their costs are fuel costs, and then half of those costs are going to the government in tax.”

Petrol and diesel prices in the UK are among the highest in the world. On top of wholesale price, distribution cost, and retailer margin, there is a 52.95 pence fuel duty on each litre of petrol and diesel, and a value-added tax that equals 20 percent of all costs, including the fuel duty.

According to official figures, the government is expected to raise £26.2 billion ($31 billion) in fuel duty in the 2022–23 financial year, representing 2.7 percent of all revenue. Fuel duty isn’t ring-fenced to be used for a specific purpose.

In March, the UK government cut fuel duty by 5 pence per litre (from 57.95 pence), but an analysis by automotive services company RAC earlier this month shows that among the 13 European Union countries that cut taxes on fuel or introduced fuel discounts, only one country made a smaller cut in petrol price than the UK did, and one country made a smaller cut in diesel price.

RAC stated that it means drivers have to spend about £12 more to fill a 55-litre family car with petrol or £17 more with diesel in the UK than in France.

FairFuelUK has also been calling on the government to set up a pump pricing regulatory body because the “oil supply chain is a very secretive set of businesses,” according to Cox.

“No one understands when oil prices change,” he said.

When told that the Competition and Markets Authority (CMA) has already launched a probe into the fuel supply chain to see how the prices can be brought down, he said he had called for an inquiry into the “fuel supply chain racketeering and profiteering” back in 2013, but the CMA “didn’t ask the right questions to the right people.”

Cox said the UK does have regulatory bodies for energy and communications markets and that drivers also need a price regulatory body. It could regulate prices at the pump and publish daily figures on how much fuel prices should be by calculating wholesale prices, refinery costs, distribution costs, taxation costs, and currency exchange rates.

In an email to The Epoch Times, a government spokesperson said: “Through our £37 billion support package we have introduced our biggest ever cut to fuel duty, saving the average UK car driver around £100, van driver around £200, and HGV over £1,500. This is in addition to saving the typical employee over £330 a year through our National Insurance cut and allowing people on Universal Credit to keep £1,000 more of what they earn.

“The Competition and Markets Authority has launched a Market Study into the supply of road fuel in the UK to consider what more can be done to ensure prices at the pumps are fair.”

Truss and Sunak didn’t respond to requests for comment by press time.