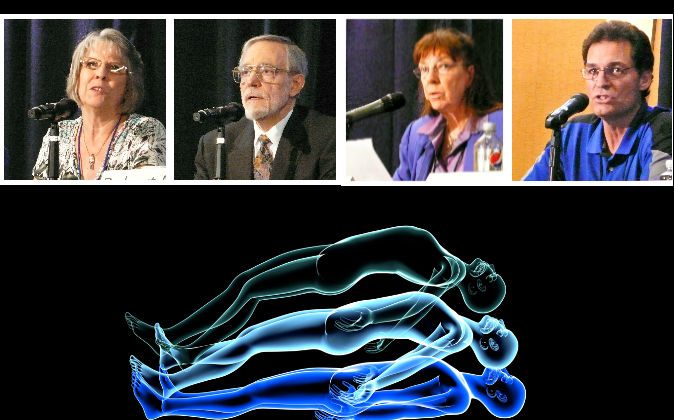 NEWPORT BEACH, Calif.—Since psychologist and medical doctor Raymond Moody popularized scientific study of near-death experiences (NDEs) in the 1970s, many researchers (with little funding) have taken up the torch.

Leading NDE researchers discussed the next steps for investigating this phenomenon as part of a panel at the International Association for Near-Death Studies (IANDS) 2014 Conference on Aug. 29. The panelists were Jan Holden, a counselling professor at the University of North Texas, editor of the IANDS Journal of Near-Death Studies, and former IANDS president; Robert and Suzanne Mays, who have studied NDEs for more than 30 years; and Mitch Liester, a psychiatrist and medical doctor in Colorado.

Each speaker chose a few points of focus for future research:

Jan Holden, Professor at the University of North Texas

1. Legitimize study: It is important for NDE research to reach mainstream society, said Holden, because the messages therein are so important. One of the lessons learned by many NDEers is that “human life has purpose,” Holden said. The importance of compassion also becomes clear. Legitimizing NDE research is key in making the breakthrough to society as a whole, she said.

The first article Holden published on NDEs was a hospital study on veridical perception. Veridical perception refers to cases in which NDEers recall information perceived during their experiences that they apparently could not have otherwise known; the information in these cases can be independently verified. Holden and her colleagues have compiled all NDE articles published in refereed journals and made them available to members on the IANDS website. Researchers she has worked with have also made great advancements in showing the electromagnetic after-effects in the bodies of NDEers, another measurable component of the phenomenon. She hopes to see all these efforts continued, as they further legitimize NDE studies.

3. Treating NDEers better: A recent study of Holden’s, which has just been accepted for publication in an American Psychological Association journal, looks at how NDEs are received by healthcare professionals. She examined 188 cases in which NDEers disclosed their experiences to healthcare providers. The majority, 4 out of 5, received positive or neutral responses. The remaining 1 out of 5, however, show a greater need for education among healthcare professionals. These negative responses inflicted mental harm, defying the Hippocratic Oath taken by all doctors to do no harm, said Holden.

1. Bigger picture of death-related phenomena: Mays is interested in studying the whole to understand the part. A comprehensive study of death-related phenomena could help NDE researchers see the bigger picture, he said. In addition to NDEs, Mays is interested in shared-death experiences (when a healthy person is seemingly drawn into someone else’s NDE as a witness), deathbed visions, reports of clock-stopping at the time of death, et cetera.

2. Veridical perceptions: Some NDEers have recalled information seen during their experiences that they apparently could not have otherwise known, and the information was later verified. A book in Dutch that has yet to be translated into English titled “What a Dying Brain Can’t Do,” outlines 78 such cases, Mays said. He hopes to find funding for the translation and to better highlight such cases.

3. Consciousness studies: Understanding NDEs relates to the study of human consciousness in general. Mays has been studying the interaction between the mind and the brain. He hopes to continue making progress in understanding how thoughts physically enter the brain from outside of it, as he believes consciousness does not originate within the brain.

1. Interview methods: NDEers recall vividly and passionately their experiences, but Mays wonders whether some details are left out that could provide greater insights. She would like to see inquiry methods further developed to help NDEers recall pertinent information.

She asked: “Are there important details left out that, when brought to light, would further uncover the nature of the transcendental realms? Is there an inquiry method that can help NDEers draw up into consciousness significant elements of their out-of-body event that they had to leave behind when they, so-to-speak, drank the draught of forgetfulness during their return to ordinary, sense-bound consciousness?”

2. Neuroscience: NDE researchers should stay abreast of rapid developments in neuroscience, such as advances in brain-imaging technology, Mays said. Scientists are discovering never-before-seen neural structures. Conventional science often views these findings as evidence that consciousness is produced by the brain, said Mays, but at the same time this technology reveals more and more anomalies within these complex structures, defying the materialist interpretation.

3. Reveal laws of the transcendent realm: If NDEers do indeed enter a different plane of existence, they could be the key to understanding laws of that realm. Mays said these laws may be different from, but congruous to, the physical laws we know.

1. Greater collaboration between scientists: Liester hopes to interest his colleagues, many of whom do not acknowledge NDEs, in this phenomenon. Liester said that a multidisciplinary study is needed to advance an understanding of NDEs, bringing together, for example, physicists, neuroscientists, psychologists, and cultural anthropologists.

2. Cross-cultural studies: Knowledge of the phenomenon could be greatly furthered, Liester said, by further understanding the differences and similarities between NDEs in various regions of the world.

3. After-effects: Liester would like to see more study of the after-effects and impacts of NDEs:
“There’s a lot of debate on what causes NDEs … [but] it doesn’t change the fact that people are affected by near-death experiences. You can debate all day about causes … but there’s less debate about what are the effects and how do they profoundly affect people’s lives.”

*Conceptual image of a near-death experience via Shutterstock