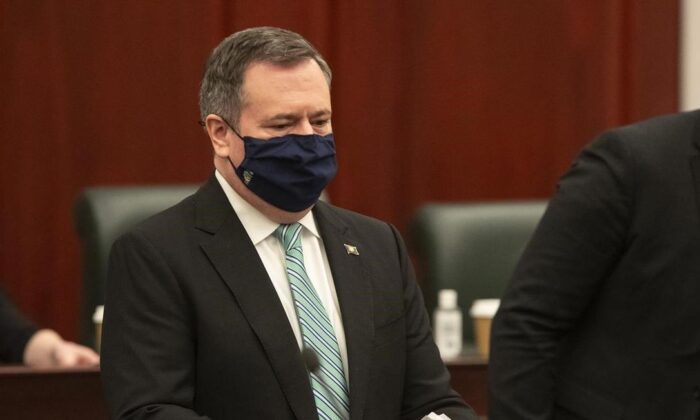 Alberta Premier Jason Kenney arrives at the 2021 budget in Edmonton on Feb. 25, 2021. Kenney says his government will make a decision later this spring on whether to pursue pulling Alberta out of the Canada Pension Plan. (Jason Franson / The Canadian Press)
Canada

Next Step on Alberta Pension Plan in Spring, but No Change Without Referendum: Kenney

EDMONTON—Premier Jason Kenney says his government will make a decision this spring on whether to pursue pulling Alberta out of the Canada Pension Plan.

But Kenney says even if the United Conservative government proceeds, Albertans will have the final say through a referendum on whether to create an Alberta Pension Plan.

Treasury Department officials are currently studying the feasibility of Alberta going it alone on a provincial plan.

The panel reported that given Alberta’s young population a separate pension plan could be a multibillion-dollar net benefit.

However, the panel noted that it heard a lot of reaction both for and against a separate plan and that Albertans want assurance that the money will be there when they retire.

Kenney made the comment Wednesday when asked by Opposition NDP Leader Rachel Notley about the pension plan project during committee discussions on the 2021 Alberta budget.

“We are awaiting results of a technical study being led by Treasury Board and Finance in co-operation with external experts to look at the costs, the benefits, and the potential structure of an Alberta Pension Plan, similar to the Quebec Pension Plan,” said Kenney.

“If the conclusion is that it would be a net benefit to Alberta and our economy while strengthening our province, then we may proceed with that referendum.”

“Final decisions on that will be made later this spring.'”

Alberta is already proceeding with a referendum in October on whether it should try to seek a more beneficial deal on equalization payments.