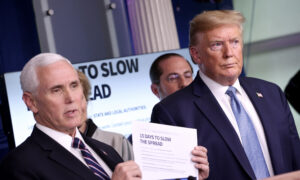 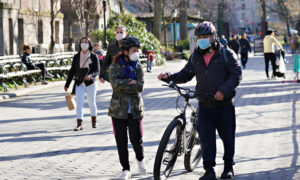 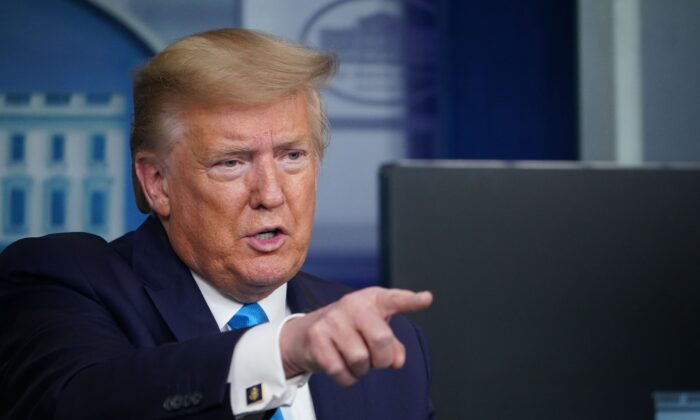 President Donald Trump speaks during the daily briefing on the CCP virus in the Brady Briefing Room at the White House on April 7, 2020. (Mandel Ngan/AFP via Getty Images)
Viewpoints

Next on Trump’s Agenda: Economic Rebirth

At the outset, President Donald Trump had no reason to doubt China’s minimization of the problem. As soon as he had reason to believe that the coronavirus was spreading rapidly in China and was being transmitted by people—contrary to the claims of the Chinese government and supported by their lackeys in the World Health Organization—the president stopped direct flights from China.

For that, he was lampooned as racist and a “hysterical xenophobe” (a Bidenism) by media and official Democrats. As his enemies shifted gears and accused him of being “anti-science,” and virtually a member of the flat earth society, he set up the Pence task force and packed it with unchallengeable authorities on epidemiology and public health administration.

He seized the headship of the strong-response school and presided creditably over a comprehensive recruitment of the private sector, which swiftly developed and distributed easy test kits, and the president worked well even with governors with whom his relations had been acidulous, (e.g. New York’s Cuomo, California’s Newsom, and Washington State’s Inslee).

At the same time, as the left generally demanded lengthy shutdowns and the enforced self-impoverishment of the country, presumably for motives that strayed beyond counter-epidemiology into mere politics, Trump covered that flank with a formidable assistance and liquidity package that totaled out at a somewhat awesome 6 trillion dollars.

After failing to lard it with boondoggles and preferments to organized labor and other chronic Democratic constituencies, the Democrats signed on.

In their desperation to find a replacement for the Russian collusion and impeachment frauds, the Democrats have unsuccessfully launched the trial balloon of a partisan investigation of the response to the CCP virus, while the whole country is still shut down in reaction to the outbreak.

That won’t get any believable traction, and the Democrats are going to have to face this president without being able to shackle him with fraudulent pseudo-legal encumbrances, and under the ill-assured leadership of Joe Biden. The last turn before the election straightaway is going to be the reopening of the U.S. economy and the steroid-hyped vertical revival of the proverbial “V” recovery.

The Trump plan is to jam through some more economic assistance, some of it as infrastructure rebuilding (fulfilling the last of his major 2016 campaign promises), like FDR passing social legislation during the war and always calling it benefits to veterans.

All the modeling at the outset of this public health crisis, which terrified the world with the specter of millions of American deaths, 500,000 fatalities in Great Britain, and tens of millions in the world, has been proved wildly exaggerated. And increasing alarm about the implications of a lengthy shutdown of most of U.S. commerce is causing public fear to shift steadily from the virus to the instant recession and sudden emergence of a leviathan welfare state, based on trillions of dollars borrowed at zero interest rates.

The president has shown considerable agility keeping his status as the benign closer-down of the country in lockstep with the medical experts, while bringing up the crescendo for economic rebirth. He’s preparing to shift to the economic priority from the medical, and will make the transition more easily than his opponents, who are lumbered with their frenzied attacks against everything Trump does, and by his good relations with the leading Democratic governors, who attest to his cooperation.

California’s Newsom even had to defend himself this week against the heinous charge of civility toward the president from the egregious blowhard Joy Behar, hostess of “The View,” possibly network television’s most nauseating program.

As of April 7, while American fatalities were over 1,000 per day and still rising, New York, for the sixth consecutive day, released more recovered coronavirus cases than it hospitalized. The now-famous pandemic model-curves are trending downward in New York, as they are in Italy and Spain. The figures are necessarily clouded by the indiscernible numbers of people deemed to have died of the virus because they had it, but where the death may have been principally caused by another ailment; and by the undoubtedly large number of cases where the symptoms were not perceived, or not identified.

Presumably, in Britain, Prime Minister Boris Johnson and Charles, Prince of Wales, each received similar exposure, but the prince is navigating the illness under doctors’ care at home while the prime minister is in intensive care. The balance of this month should provide much more information, millions of tests, more solid evidence of the efficacy or otherwise of hydroxychloroquine, which the anti-Trump media have tried to ignore because its success, such as the quick development and distribution of the Abbott Laboratories testing device, reflects positively on the president.

It may also be possible to begin inoculations of antibodies from some of the 97 percent majority of reported coronavirus cases, in which the individuals have fought off the illness successfully.

There is increasing recognition of the fact that the CCP virus can’t be exterminated in America, so until a vaccine is discovered and administered to the whole population, there will be a virus problem. But the United States has approximately 1,300 newly unemployed people for every coronavirus fatality, whose average age continues to be in the upper 70s. So far, only one-tenth of 1 percent of the U.S. population are reported as having been infected, and 97 percent of those have survived.

Despite the anti-Trump media’s effort to insist that any economic hardship must be endured until the medical threat has been completely removed, the country is coming to the realization that this is nonsense. Many leading Democrats are still calling for a long enough shutdown to give them a chance of victory in the election by accusing Trump of following their urgent advice and provoking an economic depression so profound that it could unseat him. Only the distinguished scientist and bioethicist at the University of Pennsylvania Ezekiel Emmanuel is audibly calling for an 18-month lockdown to finish off the coronavirus in a self-impoverished America.

The length of the lockdown will be the president’s decision, and I suspect that starting at the latest in mid-May (barring an upturn in the illness), he will urge everyone back to work and places of education, but observing some self-distancing, mask-wearing, and a slow return to large assemblies.

The economic stimulus in place will continue to some extent, serving the president’s political convenience. He will receive credit from most Americans for shutting down the crisis more successfully than any other large country that has had a significant exposure to it, except Germany and South Korea (Australia, Canada, and Japan don’t have medically dangerous neighboring countries and acted early enough to reduce contact with China and Europe).

The president, despite his denial that this would happen, may also subject different regions or states to different reopening schedules, but most businesses—except the entertainment and hospitality sectors and most educational facilities—can be restored to almost normal levels of activity next month.

Assuming that move is effected in a timely and correctly planned manner by his now-experienced crisis management apparatus, Trump will have mastered a unique crisis in American history, and will have built and then restored the greatest economic boom in the country’s history. Meanwhile, his opponents will have done nothing other than carp and whine and give amateur skyped Gong Show simulations from the putative Democratic presidential nominee’s basement in Delaware.

Trump should be less repetitive and self-serving in his press briefings, and give more of it back to Pence as the crisis starts to subside, but tactically, he has been one full step ahead of his enemies all the way.

There is no reason to think he will falter now. As the British say, it’s all to play for.

Conrad Black has been one of Canada’s most prominent financiers for 40 years, and was one of the leading newspaper publishers in the world. He is the author of authoritative biographies of Franklin D. Roosevelt and Richard Nixon, and most recently “Donald J. Trump: A President Like No Other.”