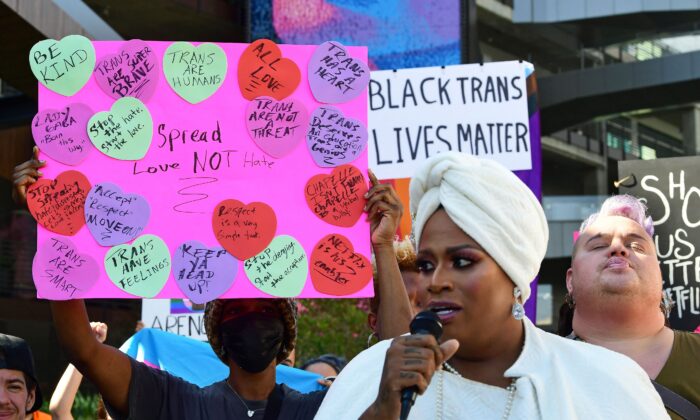 Next Goals of the Transgender Activist Movement

After scoring numerous political victories, the transgender movement seeks to advance further. What are its next goals?

Laura Perry Smalts on her website TransgenderToTransformed.com describes herself as “a former transgender who never dreamed she would return to female or to God.”

She writes, “I underwent years of cross-sex hormone therapy, two major ‘gender-affirming’ surgeries, and all of the legal changes” before reaffirming being a female.

“This is only a speculation,” she told The Epoch Times of what she expects the movement’s next goals will be, “but I think getting more trans curriculum in the schools, including having trans activists come in and talk to the kids. They are already doing this some, but I think they want it to be much more widespread.”

Dr. André Van Mol, a board-certified family physician, believes the transgender movement will continue attempting to remove “anything they view as being in their way, even if that simply means peacefully existing in disagreement with them but out of their way.”

“Goals will continue to include unopposed curriculum determination at all levels of education, including professional training; securing policy support and direct financing from corporate America and directing their DEI [diversity, equity, and inclusion] departments … [even though] equity and inclusion of viewpoint diversity is not their goal; passing favorable legislation affecting every area of life; obtaining government and insurance-level financing of medicinal and surgical transition interventions, preferably on demand; banning psychological evaluation and intervention for the gender dysphoric—essentially ‘talk’ counseling/therapy—under the vague, pejorative, and misrepresented ‘conversion therapy’ title; and revising theology … through legislation, what houses of worship can teach,” he told The Epoch Times.

Van Mol is co-chair of the Committee on Adolescent Sexuality at the American College of Pediatricians and co-chair of the Sexual and Gender Identity Task Force at the Christian Medical and Dental Association.

He said decades of research show transgender individuals have a substantial probability of underlying mental health issues from adverse childhood experiences or neurodevelopmental issues such as autism.

“These issues usually predate the gender dysphoria diagnosis, but it is ideologically popular to blame-shift problems onto stigma, marginalization, and minority stress,” he said. “Activism serves as a dodge to avoid facing the personal issues underlying it all, because now externals—society at large and specific components therein—become the problem, not one’s mental health, difficult past, or autism spectrum.”

Because of these reasons, “there is no satisfying sex and gender ideology,” he said.

Van Mol made a distinction between transgender activists and the “rank and file” person who claims to be transgender. It’s the activists who are advancing the movement’s goals, he said.

Dr. Michelle Cretella, a pediatrician on the advisory board of Advocates Protecting Children and past executive director of the American College of Pediatricians, told The Epoch Times she believes the transgender movement is much more far-reaching.

“The transgender revolution is about nothing less than the ‘abolition of man,'” she said.

Cretella was partially referring to “The Abolition of Man,” a 1943 book by C.S. Lewis that focuses on the importance of universal values in human society and warns of the destructive nature of subjectivity. But she also meant to employ the literal meaning of the phrase.

“Full acceptance of transgenderism is the first phase of accepting transhumanism,” Cretella said.

She recommends reading “From Transgender to Transhuman: A Manifesto on the Freedom of Form,” a 2011 book by Martine Rothblatt, who is transgender as well as the co-creator of SiriusXM and founder of the biotechnology company United Therapeutics.

“The world really is ready to deal with gender freedom. I believe the world is just as ready to deal with transhumanism and the freedom of form,” Rothblatt writes. “Over the next few decades, we will witness the uploading of human minds into software and computer systems, and the birth of brand new human minds as information technology.”

One Amazon.com reviewer wrote: “Martine Rothblatt’s ‘Apartheid of Sex,’ published in 1995, is the foundational text of the emerging Gender Rights movement. This book is an updated, second edition of the original. If you are not yet a Transhumanist, you may find the new material, which extends Martine’s presentation beyond Transgender issues, to enter unfamiliar territory.”

At the national level, President Joe Biden has been pushing transgender policies hard, influencing policies at all levels of government. Just after he was elected, he appointed as assistant secretary of health a transgender person, Rachel Levine, formerly Richard Levine, with the rank of admiral.

“President Biden’s Executive Order builds on the historic progress he has made for LGBTQI+ people by:

Biden has more than two years and two months left in his first term of office. Using the immense powers of the federal government, in at least some cases, he’ll be able to advance this agenda.