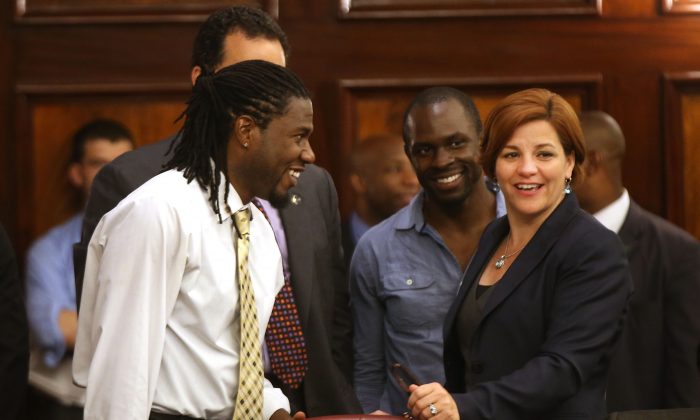 City Councilman Jumaane Williams on Aug. 23, 2013. He is in support of the proposed Council reforms. “Many of these things have been problematic throughout many speakerships, throughout many years," Williams said. (Spencer Platt/Getty Images)
New York

NEW YORK—On Wednesday a mix of 30 incumbent and likely-to-be elected council members joined on the steps of City Hall to showcase proposals to reform the rules for next year’s City Council.

The proposals include fairer allocation of member items (discretionary funds) for council members, giving greater power to committee chairs, and giving members the ability to push popular legislation out of committee without the council speaker’s approval.

The measures are largely aimed at curbing the power of the speaker’s office, which has come under fire during the two-term tenure of current Speaker Christine Quinn.

Quinn has been accused of holding member items over council members’ heads, a position she denied during her losing campaign for mayor this summer.

Quinn was also accused of holding popular bills, such as the paid sick leave bill, hostage by not allowing it to come to a vote in the committee.

Council member Jumaane Williams played down Quinn’s particular speakership as the reason for the proposed changes.

“If we didn’t have the fear of reprisal through member items and other means, the petition to discharge would have been a viable option much earlier,” a council member, who asked not to be named, said about the paid sick days legislation.

To take the reward out of whether or not council members receive discretionary funds, the proposal suggests either dolling out an equal amount, using a formula, or deciding on issue-specific initiatives.

Council member Brad Lander said the best option would likely be a combination of the three suggestions. Lander is among the leaders of the reform package, along with Council members Jumaane Williams, David Greenfield, and Fernando Cabrera.

Not all council members are in favor of the measure.

Council member Jimmy Oddo, of Staten Island, said after an unrelated press conference Wednesday, “If you get to the point where you over democratize the institution, and you essentially neuter the position of speaker, how on earth can we be a legitimate check on the executive?

“You get to a point where you effectively have created an institution that is rudderless.”

Oddo said his position did not stem from defending Quinn, but because during his 22 years in the council as both an aid and a member, he saw the benefits of using member items for rewarding council members.

“There is a practical reality of this place,” Oddo said. “If you take away the carrot and the stick with legislation like this, and you can’t get this body moving in a direction, you are moving to an imperial mayor.”

Oddo, who is a term-limited council member, is running for Staten Island Borough president.

Quinn had few comments on the proposal, saying it would be up to the next council to decide.

Once the new Council is sworn in on Jan. 1, the members will establish a rules committee, which could adopt the proposed changes.