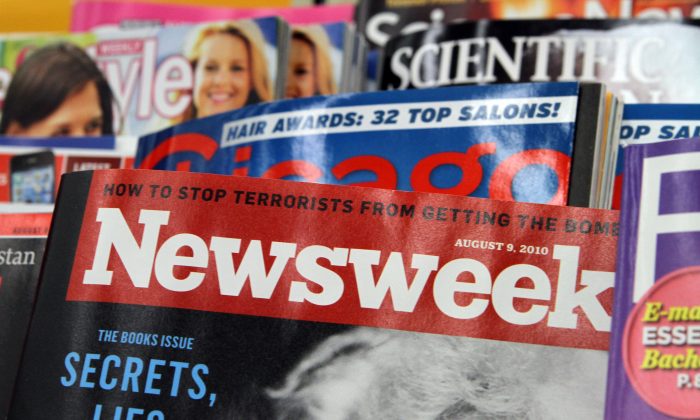 Newsweek magazine is shown on a newsstand on Aug. 2, 2010 in Chicago, Illinois. (John Gress/Getty Images)
US News

Newsweek’s New York office has been raided by law enforcement along with its parent company, IBT Media.

The New York Post reported that the office in Hanover Square, New York, was raided on Thursday, Jan. 18 and that sources said agents were “photographing servers in the offices,” but not copying files from the machines.

In a statement, Newsweek Media Group said that the New York County (Manhattan) District Attorney’s office had visited their office to obtain technical information about their servers.

“The company provided the DA’s representatives with access to the computer servers on location to allow for a technical inspection within the law,” Newsweek Media Group said in the statement, reported the New York Post.

“No information regarding the company’s content, stories, personnel, or sources was given and Newsweek Media Group has been assured by the DA’s office that the investigation is not about any content-related issues.”

According to The Outline, the search was related to an ongoing DA investigation.

“People are very upset, because apparently there was a 17-month investigation and no one told us anything,” one person told the Post.

Initially, employees were told the agents were there because a white substance had been mailed to Executive News Director Ken Li, but were then told this was a false alarm.

A lawyer for Newsweek later confirmed to employees that the investigation was related to the “procurement of servers” and no arrests were made, reported The Outline.

Newsweek Editor-In-Chief Bob Roe said in an interview for Newsweek itself that the incident was “distressing,” but that staff would “keep doing our job as long as we can”.

He said that Newsweek had been “going through a lot of transition, and it’s been difficult. I think that’s true of almost every journalistic organization I know of.”