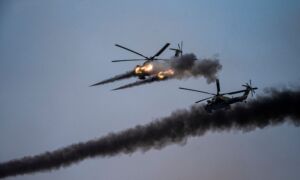 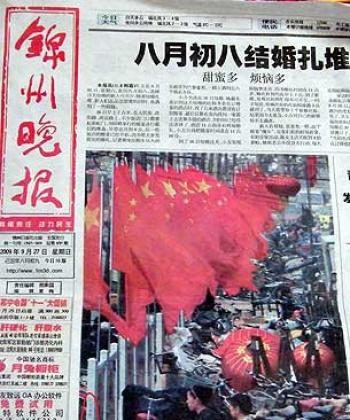 A slogan for quitting the CCP appears at the lower left corner of the front page's photo on the Sunday edition of the Jinzhou Nightly newspaper. (Provided by an internet surfer in China)
China

By Fang Xiao
Print
A Chinese newspaper was suspended from publication for accidently printing a slogan for quitting the Chinese Communist Party (CCP) on its front page, just two days before the Oct. 1 National Day.

Many Chinese and foreign media reported that the Jinzhou Nightly newspaper, a newspaper affiliated with the Party Committee of Jinzhou City in China’s Northeastern Liaoning Province, was suspended from publication after a slogan for quitting the CCP, “Heaven Eliminates the CCP, Quit the CCP and its Affiliated Organization and You Will be Blessed,” was found on the front page’s photo of the Sunday, Sep. 27 edition.

One blogger even posted this message on China’s popular Sina Web site, “Shocking: Someone is offering an astronomical price for a copy of a certain edition of the Jinzhou Nightly.”

Taken outside of a small market with a row red waving flags, the photo was meant to display the apparent festivity of the National Day. Readers soon discovered, however, that at the lower left corner of the photo was a slogan for quitting the CCP, posted on the banister of a bicycle parking spot.

An advertising agent at the Jinzhou Nightly told Hong Kong’s Mingpao newspaper that the next day, authorities ordered the newspaper to stop publication on grounds of “violating advertisement laws” and that it was unclear when the newspaper could resume publication.

“Our newspaper did make a small mistake. But I cannot issue any comment to the public. I’m not sure about what had happened and I cannot answer your question. I’m busy working right now. Don’t call me anymore,” said an employee at the editorial department of the newspaper when contacted by The Epoch Times.

When asked if people could buy last Sunday’s Jinzhou Nightly, the publication department of the paper said it was no longer available.

The advertising department declined to make any comment about the slogan for quitting the CCP, and referred questions to the editorial department.

At the time this article was written the Jinzhou Nightly’s Web site had been shut down.

Authorities have sent officials to offices of the Jinzhou Nightly to investigate the incident and dispatched police to withdraw most of the Sunday editions from the market. However, a small number of the Sunday newspapers have been circulating.

Meanwhile, someone has publicly offered an astronomical price to get a copy of the Sunday edition, and this is giving authorities a headache.

Guo Baofeng, a blogger from Fujian Province, told The Epoch Times on Sept. 28, “Authorities were overly sensitive and therefore made a big deal out of a trivial matter. This in turn had the opposite effect and opened up a wide discussion on the issue.”

For the past two to three years, slogans for quitting the CCP have become an unusual street scene in China. Many Chinese have been posting their statements renouncing the Party on public bulletin boards, bus stops, electricity poles, or advertising bulletin boards, partly because the heavy Internet censorship enforced by the regime has prevented them from posting their statements on overseas Web sites.

He Weihua, a democracy activist in Henan Province, said in an article that slogans for quitting the CCP could be seen anywhere and everywhere in the city where he lived.

Mr. Xu from Shenyang City said that such slogans are commonly seen in Shenyang, and in particular on monetary bills. “Many Chinese have lost their jobs. They hate the CCP for being corrupt and now they dare to openly scold the CCP.”

He added, “I think the CCP is so corrupt and I have already drawn a line with it long ago. Now there are messages like ‘Quit the CCP and You Will be Blessed’ written or printed on monetary bills. The messages were all about standing up against the CCP, down with the CCP, disintegrating the CCP, and whatnot. It is not something covert. Now it is very obvious and you can see it everywhere. Everyone is aware of it.”

The Global Service Center for Quitting the CCP launched the movement for renouncing the CCP after The Epoch Times published the editorial series “Nine Commentaries on the Communist Party” in 2004. Over 60 million people have now renounced the Party and its affiliated organizations.