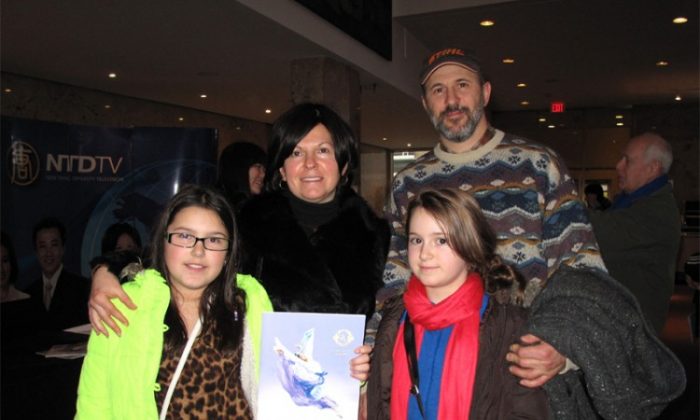 TORONTO—Maia Master, publisher of Russian-language newspaper Russian Express, was blown away by the Shen Yun Performing Arts show at the Sony Centre Sunday afternoon, the last of a five-show run in the city.

“I think it’s phenomenal. I think it provides a great opportunity for Canadians, for all multicultural communities, to see the beauty and history of the China. It’s tremendous, it’s educational, it’s entertaining, and it’s a beautiful event for the whole family,” Ms. Master said after the performance.

She said the production, which depicts the Middle Kingdom’s 5,000-year traditional culture through classical Chinese dance and music, went beyond mere entertainment.

“It’s so well put together, and the main thing is it has an idea behind it. It’s like everything is being done by the Creator we are all here to serve. I think this is the whole spirituality behind the scenes. It’s phenomenal. It’s not just entertaining because of the beautiful dance—it’s a great message. It’s so much love for China, for their own country. I think it’s a beautiful, beautiful show.”

New York-based Shen Yun is bringing about a revival of the essence of China’s ancient culture, which consisted of principles originating from Confucianism, Buddhism, and Daoism such as benevolence, honour, justice, propriety, and respect for the heavens.

Ms. Master appreciated the spiritual aspect of the performance.

“The message is that everything, everybody has a purpose.”

“We are here to live in peace, and everybody has their own purpose to make this world a better place to live.”

According to the Shen Yun website, China’s ancient traditions have been oppressed by various campaigns launched by the ruling communist regime, including the Cultural Revolution.

“I come from Russia, so I can relate to that,” said Ms. Master. “The communist regime in China is destructive. It’s atheism. They don’t believe in God, in Russia and China. It’s destructive.”

She added that she found Shen Yun educational but “not overwhelming.”

“It’s beautiful, beautiful. I know there’s a lot of work, sweat, and discipline involved behind the scenes. For putting something like that together, the organizers deserve a lot of credit,” she said.

“Everything, from the entrance to the last minute, was extremely well organized. … I used to organize many events in the past and I see so much soul to put every little detail [in Shen Yun].”