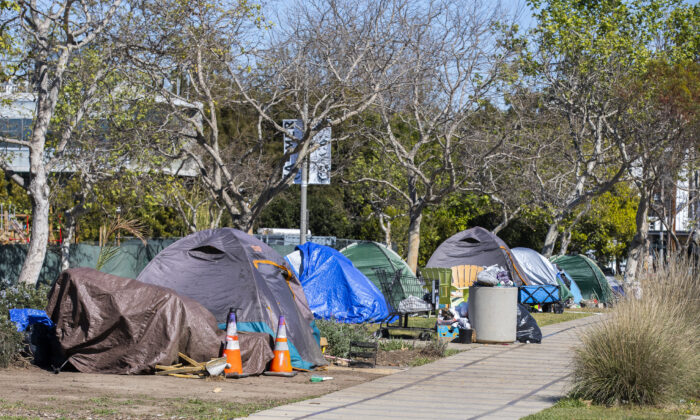 SACRAMENTO—California’s plan to push some homeless suffering from mental illness into court-ordered care moved forward this week following a unanimous vote in a Senate committee hearing.

The CARE Court would pertain to some residents and homeless struggling with substance abuse and mental illnesses by ordering them to receive court-ordered care for up to two years.

The bill will now move forward to the Senate’s Health Committee for another vote on Wednesday afternoon.

While the initiative seeks to help thousands of Californians, the proposed program has been a contentious issue as it would require those who reject treatment to be placed into conservatorships.

“The outcome for the Care Court in the worst-case outcome is a conservatorship,” Umberg said during the hearing.

If passed, the system would prioritize those with specific conditions such as schizophrenia and psychotic disorders, according to Secretary for the California Health and Human Services Agency Dr. Mark Ghaly.

“Care courts will help thousands of Californians, we estimate somewhere between seven and 12,000 Californians,” Ghaley.

Ghaly additionally said the program would not solve the whole homelessness crisis but rather its most “curable” component.

The bill received support and opposition from different organizations, including a split of opinions from those associated with the National Alliance on Mental Illness, a national grassroots mental health organization.

Keris Myrick, a member of the alliance, said she was diagnosed with schizophrenia and introduced to the mental health system in Los Angeles when she was in her 30s.

Myrick said she fears that the Care Court will promote disparities for people of color.

“Courts have not been fair, safe, or a place of care for black and brown people,” she said during the hearing. “I really want us to have access to relentless outreach, engagement services, peer support… and treatment that’s culturally aligned and effective.”

Meanwhile, Sen. Maria Durazo (D-Los Angeles) expressed concern over what she called the vagueness of the bill’s text, specifically how a participant might be put into a conservatorship or not.

“We’re asked to take a leap of faith here,” she said prior to her vote supporting the bill. “We’re asked to make a decision that might violate what we always believe in… the freedoms and the civil liberties that we believe in.”