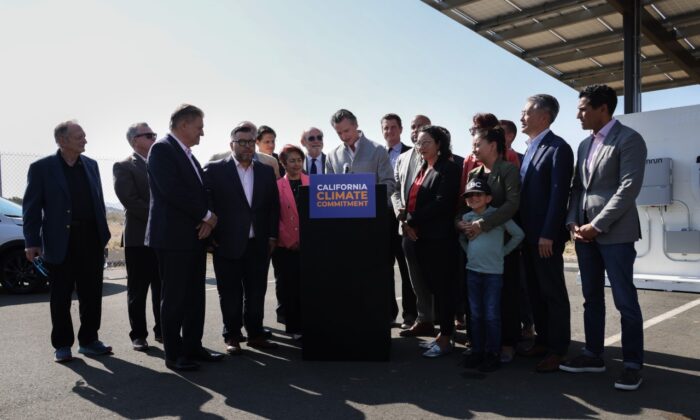 The governor signed the measures in Vallejo, California, alongside several state legislators at the U.S. Department of Agriculture Forest Service Regional Office on Mare Island, a facility powered by green energy.

The new measures are expected to create 4 million jobs, reduce the state’s oil use by 91 percent, protect some communities from oil drilling, and speed the state’s renewable energy transition, the governor said in a Sept. 16 statement.

While other states, such as Texas, were “doubling down on stupid,” the governor said, by continuing to use fossil fuels, he lauded California’s bold investment in renewables, calling it the “great awakening.”

“The Assembly has initiated this kind of legislation for years and put forward some of these bills more than a year ago,” Rendon said. “That makes it especially heartening to be able to enact a package like this as a team.”

The governor signed six measures that were part of his climate agenda. The new legislation will address the state’s targets to reach 100 percent clean energy, create more projects to remove carbon from the atmosphere, and restrict oil drilling near “sensitive” communities.

Newsom approved $53.9 billion to fund his climate commitment in this year’s budget, which he signed on June 30.

Newsom signed Assembly Bill 1279 to codify a goal of achieving the state’s carbon-neutrality goal by no later than 2045. The legislation has set an 85-percent emissions reduction target.

“According to experts, to avert the most catastrophic impacts of climate change, we must limit atmospheric warming to 1.5 degrees Celsius, which necessitates California reaching net zero emissions by mid-century,” said the legislation’s author, Assemblyman Al Muratsuchi, a Democrat, according to a Senate floor legislation analysis.

A coalition of about 60 groups from across the state opposed the measure and said it would lead to massive reductions in new housing construction, agriculture production, energy, transportation, and all manufacturing.

“This is an extraordinarily aggressive goal that would require large-scale transformation of California’s entire economy,” the coalition wrote in a letter to Muratsuchi in August. “This policy is the equivalent of eliminating California’s industrial, residential, commercial, transportation, electrical, and manufacturing sectors—effectively shutting down the entire state economy.”

In an effort to protect “sensitive” places from oil drilling, Newsom approved Senate Bill 1137, which prohibits new or extensive retrofitting of existing oil operations within 3,200 feet of homes, schools, nursing homes, and hospitals, taking effect in 2025.

The measure also establishes pollution controls for existing oil wells within the protected range and places more restrictions on existing oil or gas production facilities, including limits on light, dust, sound, and vehicle speeds, along with other rules.

All operators will be required to develop lead detection systems and detailed response plans.

Earthjustice and a group of environmental organizations supported the legislation and stated that communities of color or disadvantaged socioeconomic backgrounds are more negatively affected by oil and gas operations.

“The negative impacts of oil extraction—from poor air quality to contaminated water—are more often felt by low-income and non-white communities and are compounding the health impacts of the ongoing COVID-19 pandemic,” the group told legislators.

The State Building and Constructions Trades Council, as well as the American Federation of Labor and Congress of Industrial Organizations, opposed the measure, stating that California’s oil production is already under “the strongest environmental and labor standards in the world.”

They stated that the legislation would “eliminate thousands of high wage industrial manufacturing union jobs in the state’s most disadvantaged and underserved communities.”

To boost California’s clean energy goal, the governor signed Senate Bill 1020, which mandates the state to reach 100 percent renewable energy by the end of 2045 and accelerates the same goal for state agencies.

The new legislation by state Sen. John Laird, a Democrat, establishes a mandate for all retail sales of electricity to the state’s customers to be 90 percent renewable or zero-carbon by the end of 2035, 95 percent by 2040, and 100 percent by the end of 2045.

As for state agencies, the deadline would be moved up by a decade by mandating 100 percent renewable or zero-carbon energy sources by the end of 2035.

Laird said SB 1020 is a part of “the work that must be done to address the looming peril of climate change.”

The measure will cost the state Department of Water Resources $3.2 billion, which will be passed on to the 27 million ratepayers of 29 public water agencies of the State Water Project, the nation’s largest state-owned clean water and power generator, according to the Assembly Appropriations Committee.

The water resources department also anticipates $110 million in additional costs over a 20-year period to generate electricity for other state agencies. However, these costs can’t be passed on to consumers directly. About $700,000 will likely be shouldered by the California Public Utilities Commission and $32 million by the California Air Resources Board, which is expected to “severely hamper [the board’s] operations,” according to the committee’s fiscal analysis.

More than 50 public water agencies—represented by the State Water Contractors and the Metropolitan Water District of Southern California—called for amending the legislation because of “cost concerns from the accelerated [energy] procurement required for the [State Water Project],” according to the legislation analysis.

SB 905, introduced by state Sens. Anna Caballero and Nancy Skinner, both Democrats, requires the state air resources board to establish projects to capture, remove, utilize, and store carbon emissions in certain industries, such as oil refineries.

The board will also need to create a permit application for carbon-emitting projects and establish processes for monitoring and reporting air pollution.

“In order to meet our climate goals and prevent the most devastating impacts of climate change, the state must deploy a range of tools to both reduce and capture carbon emissions, while minimizing economic impact on Californians,” Caballero and Skinner said.

A coalition of business organizations, including the California Chamber of Commerce and the Western States Petroleum Association, stated that the legislation offered “false promises” and that it “failed to accelerate and promote the aggressive deployment” of these projects.

The Center for Biological Diversity, Indigenous Environmental Network, and Food & Water Watch also opposed the legislation, asserting that the measure relied on the faulty assumption that carbon capture, utilization, and storage were necessary for carbon neutrality, calling the projects “unnecessary, ineffective, dangerous to communities, and severely under-regulated,” according to a legislation analysis.

“[The bill] ensures that carbon capture projects will not result in increased oil production and emissions through [enhanced oil recovery],” Limón said in the most recent legislation analysis by the Assembly in August. “As conversations continue around carbon capture in the state, this bill sets an appropriate guardrail that will ensure we are truly prioritizing our climate goals.”

The last piece of legislation signed was Assembly Bill 1757, which calls for removing carbon from the atmosphere by planting trees, restoring wetlands, and increasing public landscaping and urban forestry projects.

The measure by Assemblymembers Cristina Garcia and Robert Rivas, both Democrats, was well supported by environmental and agricultural organizations.

“It is critical that we not only sharply reduce emissions but also work to remove existing carbon pollution from the atmosphere using natural solutions,” the legislation’s authors said.

Those opposed to the measure—the Western Growers Association, Winegrape Growers Association, and Walnut Growers, among others—wrote to legislators with concerns about practicality because the technologies needed for implementing the plans might “not [be] accessible for most farmers,” and the costs likely “cannot be sustained.”

“This is a great awakening,” he said. “We have to disenthrall ourselves from the world we created that’s created these conditions. I think this package is balanced, thoughtful, and appropriates itself in a way that we can advance and achieve our goals. This is about application. This is about implementation. And it’s about time.”