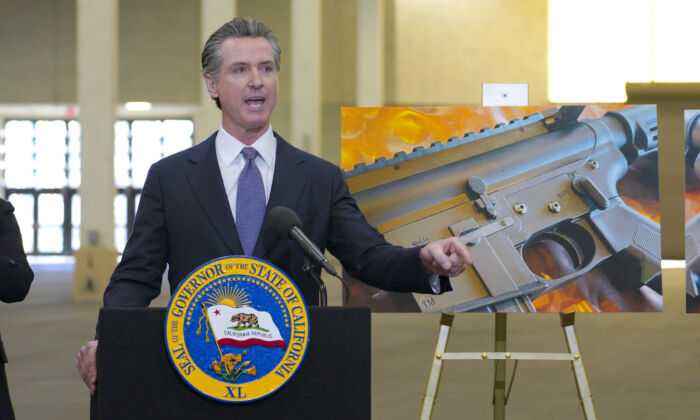 California Gov. Gavin Newsom signed on July 22 a new gun control bill that will allow private citizens to sue anyone who imports, distributes, manufactures, or sells assault firearms or so-called ghost guns, which are banned in the state.

Senate Bill 1327, which will take effect in January, was modeled after Texas’ abortion law that allows people to sue anyone who aids or abets in an abortion. Like in the Texas law, people will receive at least $10,000 in damages for each weapon, plus attorneys fees.

Sens. Bob Hertzberg (D-Van Nuys) and Anthony Portantino (D-La Cañada Flintridge) designed the law to mimic Texas’ measure so that the U.S. Supreme Court—which upheld Texas’ law last year—would also have to strike down Texas’ legislation if it were to overturn the California law.

Newsom said at a news conference Friday at Santa Monica College that he expects the law to be litigated in the Supreme Court, which has been sympathetic to gun rights in recent rulings.

Hertzberg said Friday during the news conference that “if the United States Supreme Court is seeking to devolve authority to the states … then this California legislature will use this exact legal framework to save lives being taken by it by taking illegal guns off the street.”

“If it takes another 100 laws, so be it to protect our residents from gun violence,” he said.

Sam Paredes, the executive director of Gun Owners of California, told the Los Angeles Times that the legislation is a “retaliation against lawful gun owners and the court because of the Texas decision,” and that the bill’s authors are being “vindictive.”

Paredes said that the firearms industry will have a “strong reaction” to the bill going into law.

But the bill is not the only gun control measure Newsom has signed this week. Among them include a series of other aggressive gun control bills signed July 21. The laws come on the heels after a series of mass shootings occurred last month in California, New York, and Texas.

Assembly Bill (AB) 228 authored by Assemblyman Freddie Rodriguez (D-Chino) will require the Department of Justice to inspect firearm dealers a minimum of every three years, except for a dealer whose place of business is located in a jurisdiction that has adopted an inspection program. The law will go into effect Jan. 1.

AB 1842, also by Rodriguez, will prevent gun manufacturers from charging more than 5 percent of the purchase price of the firearm as a restocking or other return-related fee when the purchase of the firearm is canceled by the buyer within 10 days of the application, with an exception for special order firearms.

Another gun reform bill, authored by Assemblyman Steve Bennett (D-Ventura), will restrict the sale of any firearm, firearm precursor part, or ammunition on properties owned by the 31st District Agricultural Association and the Ventura County Fair and Event Center. The Ventura County Fair has been notorious for its annual gun shows.

AB 2156 by Assemblywoman Buffy Wicks (D-Oakland) will prohibit firearm manufacturing without a state license and places a cap on the number of guns dealers can manufacture without a license.

AB 2239 by Assemblyman Brian Maienschein (D-San Diego) will establish a 10-year threshold for individuals convicted of child and elder abuse before they can own a firearm.

SB 906, authored by Sen. Anthony Portantino (D-La Cañada Flintridge), will require local educational agencies to educate California’s parents about child access prevention laws relating to the “safe storage of firearms,” and will mandate school officials to report to law enforcement any suspicious threats of a homicidal act. It will also require a thorough investigation of any threats.

SB 915, authored by Sen. Dave Min (D-Costa Mesa), will restrict the sale of firearms and firearm precursor parts, and ammunition on any state property.