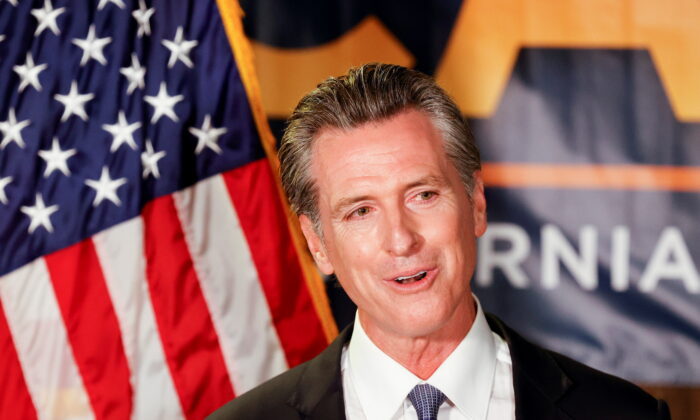 California Governor Gavin Newsom speaks after the polls close on the recall election, at the California Democratic Party headquarters in Sacramento, Calif., on Sept. 14, 2021. (Fred Greaves/Reuters)
US News

California Gov. Gavin Newsom on Thursday approved two measures that seek to make it easier to build more housing in the nation’s most populous state.

The first, Senate Bill 9, allows for the construction of more than one housing unit on land that was formerly designated for a single unit, without the approval of local authorities. The second, Senate Bill 10, would ease environmental rules on multi-family housing and allow for the construction of denser development near public transit corridors.

Newsom signed the most prominent legislation despite nearly 250 cities objecting that it will, by design, undermine local planning and control.

The outcome marks the latest battle between what’s come to be thought of as NIMBY vs. YIMBY. While most agree there is an affordable housing shortage, proposed construction often runs into “not in my backyard” opposition.

The state legislature has for years attempted to pass state preemption rules that force local governments to allow multi-family dwellings to be built in more residential neighborhoods. However, those efforts have been met with intense opposition from homeowners and suburban cities, The New York Times reported.

Newsom also announced that California will pour $1.75 billion into a scheme called the California Housing Accelerator, saying that it will expedite the construction of 6,500 affordable multi-family units that had been stalled due to constraints on the supply of tax-exempt bonds and low-income housing tax credits.

It’s part of $22 billion that the state plans to spend to spur new housing and ease homelessness along with the new laws.

The governor said in a news release that the plan marks the most significant investment in housing in the state’s history, with $10.3 billion proposed for housing and over $12 billion for the unhoused.

Newsom has made fighting homelessness a centerpiece of his administration and said he was spurred to even more urgency by a recall election that threatened to unseat him in midterm. He survived when nearly two-thirds of voters decided to keep him in office this week.

“The housing affordability crisis is undermining the California Dream for families across the state, and threatens our long-term growth and prosperity,” Newsom said in a news release. “Making a meaningful impact on this crisis will take bold investments, strong collaboration across sectors, and political courage from our leaders and communities to do the right thing and build housing for all.”