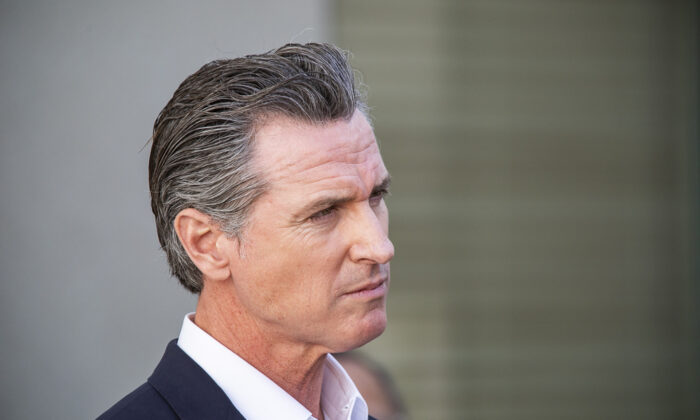 The flip is true for Democrats. They can’t win without the liberals, but can’t win only with them. Al Gore’s depressing environmentalism in 2000 and Hillary Clinton’s attack on the middle-class “deplorables” in 2008 were losers. But the “triangulation” of Bill Clinton in 1992, the “cool” moderation of Barack Obama in 2008 and the “Working Class Joe” Biden of 2020 were winners.

That’s something Gov. Gavin Newsom is ignoring as he looks beyond a likely easy re-election as governor this November toward a presidential run in 2024 or 2028. He seems to think the “California Way,” his new slogan from his State of the State address, is going to play in Peoria, to use an old phrase, as well as it does in the Pacific Heights section of San Francisco.

Yet even he likes to quip, “San Francisco is 49 square miles surrounded by reality,” a phrase Joe Eskenazi pointed out actually was coined by Paul Kantner of the Jefferson Airplane.

As the New York Daily news described the controversy:

“California Gov. Gavin Newsom wants Disney to rethink plans of relocating 2,000 jobs from Southern California to central Florida in light of a growing dissatisfaction of some company employees with its response to Florida’s ‘Don’t Say Gay’ bill.

“‘Disney, the door is open to bring those jobs back to California – the state that actually represents the values of your workers,’ the Democratic governor wrote on Twitter over the weekend.

“Newsom was sharing a report by the Los Angeles Times, in which a group of ‘LGBTQIA+ employees of [Disney-owned] Pixar and their allies’ expressed anger and frustration at the company’s inaction regarding its position against the bill.

“Slammed as ‘hateful’ by critics, the bill forbids discussions about gender identity and sexual orientation in primary schools’ classrooms. It has passed both the state House of Representatives and the Senate. The state’s Republican governor, Ron DeSantis, is expected to sign it into law.”

Yet as a Breitbart Fact Check pointed out, “But the legislation that is causing such a stir among Democrats and journalists does not mention ‘gay’ or any specific sexuality.

“The text of the relevant portion of the bill reads: ‘A school district may not encourage classroom discussion about sexual orientation or gender identity in primary grade levels or in a manner that is not age-appropriate or developmentally appropriate for students.’”

It’s also worth pointing out these and other jobs fled California because of its punishing tax and regulation climate. Disney cares more for profits than toeing the line on the latest iteration of the ever-changing “woke” ideology.

The problem for Newsom’s future is Florida is the biggest “swing state.” Advancing the “woke” agenda might be popular in California, but it is not in Florida and will cost him votes.

Here are the winning percentages in the recent presidential races for Florida, which in 2024 will have 30 electoral votes:

Of those seven elections, only one, in 2020, did not contribute to the national winner’s tally in the Electoral College. Florida is absolutely crucial to any presidential bid in 2024 or 2028.

Newsom should be doing a Clinton “triangulation” on issues like this, instead of insulting Floridians. There’s a way to do it—maintain your liberal base, while not insulting centrists—if you know how and are serious about winning.

You can write the ads yourself Republicans will run against Newsom. Non-Californians already have a risible attitude toward the state and the “California Way.”

There are other issues on which he’s making this mistake. One is critical race theory (CRT), now banned or restricted in 36 states. Last year Newsom signed into law the nation’s first mandated ethnic studies program. As The Epoch Times reported, “A high school teacher in Salinas Valley has quit her job and moved out of state over what she called ‘leftist indoctrination’ of students in California classrooms through ‘ethnic studies’ programs.”

Newsom also has signed into law several gun-control bills. But that’s anathema to working-class Democrats in such swing states as Pennsylvania, Michigan and Wisconsin, where hunting is ingrained in the culture.

Hasn’t Newsom heard of the warnings by such Democratic strategists as Ruy Teixeira and James Carville? The latter lamented, “Wokeness is a problem and everyone knows it. It’s hard to talk to anybody today—and I talk to lots of people in the Democratic Party—who doesn’t say this. But they don’t want to say it out loud.”

Teixeira wrote parents’ “worries cannot be bludgeoned away by saying CRT has no influence and parents just don’t want their kids taught about slavery. Parents are far more worried about their children being arrayed into hierarchies of privilege and oppression and encouraged to see everything through a racial lens than they are concerned with their children learning about historical incidents and practices of racism. …

“Democrats would be well-advised to focus instead on an inclusive nationalism that emphasizes what Americans have in common and their right not just to economic prosperity but to public safety, secure borders and a world-class but non-ideological education for their children. That’s much more likely to work than simply denying a lot of these issues are problems.”

Teixeira and others have been pointing out how issues such as CRT and sex-ed in schools are pushing Latino and black voters away from the Democratic Party and toward the Republicans. Although most remain Democrats, a shift of just 5 percentage points would doom Democrats in the swing states in 2024.

This November’s election also is expected to show how the Democrats, by ditching bread-and-butter issues for social engineering fads, are out of touch with their own base. Some Democrat presidential hopefuls will get the message.

But even if Newsom eventually does get the message himself, for him it may be too late.