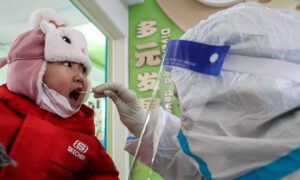 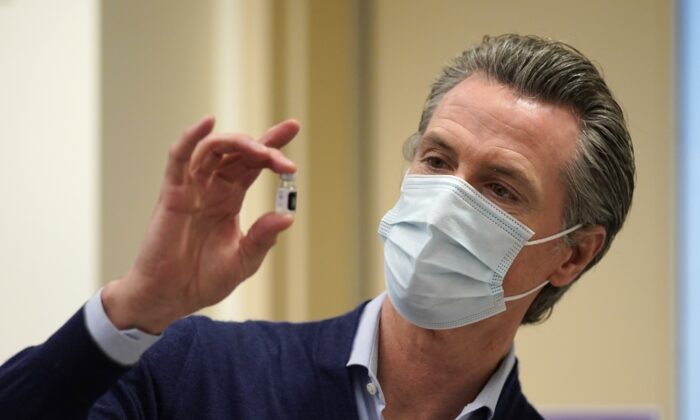 California Gov. Gavin Newsom said Monday that only about one percent of California’s 40 million residents have received a COVID-19 vaccine, an immunization rate that he decried as “not good enough.”

Newsom made the remarks at a briefing on Monday, during which he said the number of new COVID-19 infections on Sunday was nearly 30,000, while the seven-day average of daily deaths due to respiratory disease stands at 336.

“Just to put it in perspective, in the last 14 days close to 4,000 Californians have lost their lives. This is a deadly disease, this is a deadly pandemic. It remains more deadly today than at any point in the history of this pandemic.”

The Democrat governor then turned his focus to the state’s massive vaccination campaign, which he said is being executed “with a sense of urgency that is required of this moment and the urgency that people demand.”

“Our energy and focus has also gone to this notion of the light being at the end of the tunnel, and despite being in the tunnel, we recognize there’s hope on the horizon,” he said, noting that $300 million has been proposed in the 2020-2021 budget specifically for vaccinations, in areas like public education campaigns and logistics.

Of the more than 1.29 million vaccine doses received in California, and another 611,000 shipped but not yet arrived, just 454,000 have been administered in the state. “It’s gone too slowly,” Newsom said.

“We want to see 100 percent of what’s received immediately administered in peoples’ arms,” he added.

“We are working aggressively to accelerate our pace,” he said, including by increasing the number of distribution sites and expanding the scope of who can administer the vaccine, including pharmacy technicians and dentists.

Across the country, the pace of immunizations has gone slower than planned due to a range of logistical hurdles.

Around 15.4 million doses of Pfizer’s and Moderna’s two-dose vaccines have been distributed in the United States, according to data from the Centers for Disease Control and Prevention (CDC), but just 4.6 million doses have been administered as of Jan. 4.

A top official heading the Trump administration’s federal vaccine program told CBS’s “Face the Nation” on Jan. 3 that the government is considering giving people a half-dose of Moderna’s COVID-19 vaccine in order to get more people inoculated faster.

Trump administration officials had said they expected 20 million people would get vaccinated against COVID-19 by the end of the year, but the figure now stands at around one-third of the initial projection.

Dr. Anthony Fauci, head of the National Institute of Allergy and Infectious Diseases, said in an interview last week on NBC’s “Today” program that “we would’ve liked to have seen it run smoothly and have 20 million doses into people today, by the end of the [year] 2020, which was the projection,” and that “obviously, it didn’t happen, and that’s disappointing.”

“Some States are very slow to inoculate recipients despite successful and very large scale distribution of vaccines by the Federal Government. They will get it done!” Trump wrote in a recent tweet.