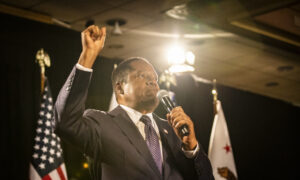 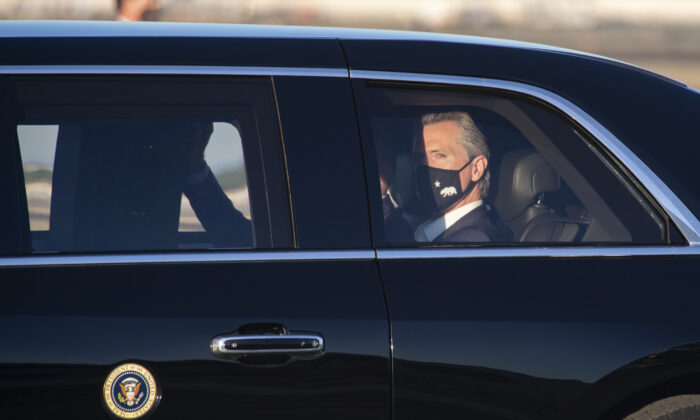 “That’s it. I’m outta here.” So a friend told me after the blowout recall loss on Sept. 14. This friend long has been wavering on whether to leave California for relief from taxes and the general “Crazifornia” atmosphere.

Had the recall election been close, my friend might have stayed—even with Gov. Gavin Newsom still winning—because there would have been a hope of reform. But a 64 percent “No to Recall” vote decided the issue.

All these folks would be following the roughly 650,000 who are skedaddling every year. Of course, folks still come here: tech hotshots to Silicon Valley, wannabe movie stars to Hollywood, illegal aliens to everywhere. But as everyone now knows, for the first time in history, in recent years more people are leaving than coming.

I provided details in my Aug. 25 Epoch Times article, “California Businesses Exiting Faster Than Ever.”

The Babylon Bee just ran a spoof, “Gavin Newsom Named U-Haul Salesperson of the Year.” It quoted the firm’s fictional western regional director, Fennick Buggstein: “We are deeply grateful to Gavin for our success in 2021. The only problem now is that we’re all out of trucks. And no one is willing to drive a U-Haul back to California. And I’m leaving with my family as well. So I guess this is it! Bye everyone!”

Seriously, if that’s possible, with the recall now in the past, what issues now are facing the Golden State?

1. A $1 trillion public unfunded liabilities debt hanging over the state from pensions and retiree medical care. It currently costs $8 billion from the state general fund just to service that debt, not to mention billions more from local and school pensions. The amount only will grow, requiring tax increases.

2. A school system that perennially scores 48th on national tests. “Better than Mississippi” is not a great selling point. The powerful California Teachers Association and California Federation of Teachers continue to oppose school choice, merit pay for the best teachers, and other reforms.

3. A record-high tax burden. Income, sales, and gas tax rates top those in any other state.

4. A crumbling infrastructure. The $5 billion yearly gas tax increase from 2017 only partly has filled potholes because there are so many of them. And the tax increase only was “needed” because of other foolish spending priorities. See No. 1, above. And see the high-speed rail boondoggle, still choo-chooing along despite Newsom’s promise in 2020 to get rid of it.

5. Punishingly high housing prices. What young couple can afford a home when the median housing price is $800,000 statewide, even higher in coastal areas? Efforts to reform the California Environmental Quality Act (CEQA) and other barriers to more construction never get far.

6. Environmental unrealism raises the price of everything. As I detailed in “California Wildfire Greenhouse Gases Dwarfed by China’s” from Aug. 12, the problem isn’t in California, but the People’s Republic of China. Yet our residents keep getting punished for something that’s not our fault. Newsom banned selling gas-powered cars by 2035, just 14 years from now. He couldn’t totally ban older, gas-powered cars. So California increasingly will resemble communist Cuba, where cars such as ’57 Chevys just keep getting older, patched up more ingeniously each year.

7. Not just the teachers unions, but the other unions will keep getting stronger, devouring more of the state economy. These include AFCME, the SEIU, the Correctional Peace Officers Association (prison guards), the numerous sheriff and cop associations, and the surprisingly powerful California Nurses Association.

After the Newsom victory, AFSCME Local 3299—University of California service workers—sent out this gloating email: “We rose to defend our state from the anti-union and anti-science extremism at the heart of this recall. Together, we united behind a Governor who has prioritized our health, the safety of essential workers and school children, and an economy that works for all of us because California deserves nothing less.”

You can bet they’re going to expect big-time payback during next year’s pay negotiations.

8. Critical race theory and other schemes to continue to pit Americans against one another will be advanced. Shouldn’t we be coming together to provide opportunity for all, making the pie bigger instead of dividing it up into ever more divisive pieces?

Finally, let me end on a hopeful note. Especially as we now already have begun the next cycle racing toward the Nov. 8, 2022, election.

Latinos, although opposing the recall, voted more in the GOP direction than in recent elections. Some are calling it the “canary in the coal mine,” warning Democrats that they ought to stop taking for granted that Latinos will keep backing a party that does nothing for them.

As Larry Elder brought up many times during his campaign, Latinos and blacks are being shafted by the horrible California schools system, which benefits the teachers unions at the expense of students.

In a July 18 ET column, I urged, “The Only Way Republicans Could Displace Gavin Newsom” was to emphasize education almost exclusively precisely to garner these Latino and black voters. I’m not blaming Elder. He ran a valiant campaign.

He’s hinting at a run next year. I hope he, or whomever the GOP ends up pushing past the senseless, anti-democratic Top Two system, adopts that strategy. Sure, there are so many other things one could address, and Elder did address—most listed above.

But for a Republican to have any chance, there should be one topic: education. Hammer it home.