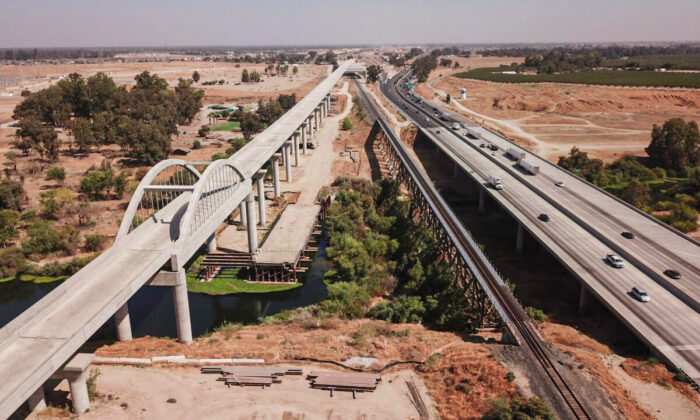 In this aerial image, vehicles drive past farmland and part of the California High Speed Rail Authority San Joaquin River viaduct construction project alongside US Highway 99 through the Central Valley between Madera County and Fresno County, Calif., on Aug. 26, 2021. (Patrick T. Fallon/AFP via Getty Images)
Viewpoints

Newsom Needs More Money for His Bullet Train to Nowhere

Governor Gavin Newsom’s bullet train project from Merced to Bakersfield makes so little sense that members of his own party are trying to put the brakes on it. Thus far about $9 billion has been spent with virtually nothing to show for it. In his recently proposed state budget, Newsom seeks another $4.2 billion, but approval is far from certain.

It has been over 13 years since California voters approved the construction of a high-speed train “linking Southern California counties, the Sacramento/San Joaquin Valley, and the San Francisco Bay Area.”

They approved $9 billion in public funds for a project they were told would cost about $33 billion. The rest was to be privately funded. It was to travel at 200 miles per hour, delivering passengers between Los Angeles and San Francisco in under three hours.

The project was dubious from the start. It was sold as a “green” project, replacing polluting cars and planes, and one necessary due to projected population growth.

Opponents argued that getting from Los Angeles to San Francisco is not a problem; it’s already cheap and fast by plane. The problem is getting to work. And, unlike the popular Amtrak train serving the Northeast corridor connecting five large cities, this project connects just two large cities far from each other. Topography is also a problem in California.

The project encountered a host of problems from the start, including legal challenges, land acquisition problems, cost overruns, and a determination that the speed requirements could not be met. Revised estimates put the project at closer to $100 billion! Nonetheless, former governor Jerry Brown pushed forward.

To his credit, upon taking office Newsom spoke frankly about the project. He acknowledged “there simply isn’t a path to get from San Francisco to L.A. … The current project, as planned, would cost too much and respectfully take too long,” he said.

But rather than killing the project, he announced it would be scaled back. Instead of San Francisco to Los Angeles, it would now take riders the 119 miles from Bakersfield to Merced!

There is no traffic to speak of between the towns. Merced has just 80,000 residents. Critics quickly labeled it the “train to nowhere.” Newsom called the attack “offensive” to the people of Merced. But he otherwise failed to provide any legitimate justification for the project.

Last year he requested, but the legislature did not approve, $4.2 billion in additional funding, the remainder of the monies authorized by voters in 2008. Other revenue has come from a federal government grant under President Obama, and from money diverted from California’s cap-and-trade program, in which some companies make cash payments to cover their greenhouse gas emissions. Newsom is back this year seeking the additional funds.

Some California Democrats are rightly concerned about the request. Voters approved these monies for a train from S.F. to L.A., not Bakersfield to Merced. Is there any doubt that voters would not have approved such a project? Using the monies for this purpose is likely illegal.

State Assembly Speaker Anthony Rendon warned, “The fact that the state currently has high revenues does not relieve us of the responsibility to target those revenues—both to the people who need it most, and to the places where it will do the most good.”

California’s own auditor determined that the project will miss the deadline. In response, President Trump called for a return of the federal funds. But Newsom was able to avoid returning the money by keeping the project going, albeit scaled back. With Biden now at the helm, Newsom is likely in the clear. After all, trains are a key component of the Green New Deal, under which rail travel replaces planes. In fact, California looks poised to get even more federal money under Biden.

A White House summary of the new infrastructure bill lists $12 billion for “intercity rail service, including high-speed rail.” Since the California project is the only high-speed rail project in this country, watch these dollars wind up in California. You see for progressives, once they deem a project to be “green,” it need not make financial sense.